By Josh Kim – The Hockey Writers

While it’s common knowledge that Team Canada is consistently one of the favourites heading into each World Junior Championship, this year brings with it an augmented level of excitement, as this particular tournament roster has the potential of being the best in Canada’s long and illustrious junior hockey history.

Boasting 26 first-round picks, there are currently a plethora of household names skating alongside one another in Red Deer. From last year’s returnees to a new crop of dominant junior players, the two intrasquad scrimmages over the weekend provided some insight on what the final roster could resemble.

Following a dominant showing during last year’s tournament overseas, Canada will hit the ice in search of their 19th gold medal. Already leading all other countries in regards to medal count with 32, the Canucks will be backed by the comfort of their own backyard, playing within a bubble in Edmonton. Attempting to avenge the heartbreak that occurred the last time the Canadians hosted this tournament, here are the 25 players you can expect to defend Canada’s title.

Let’s start with last year’s returnees. Quinton Byfield (Newmarket, ON.), Dylan Cozens (Whitehorse, YT.), Connor McMichael (Ajax, ON.), and Dawson Mercer (Bay Roberts, NL.) all find themselves back with the national team following a successful tournament in Ostrava. All four have seemingly gotten better, as McMichael, Cozens, and Mercer all averaged well over a point-per-game in their respective leagues, and the Los Angeles Kings just drafted Byfield 2nd overall in the 2020 NHL Draft. Combine that with an impressive showing at selection camp, and you have four locks to make the team.

Kirby Dach (Fort Saskatchewan, SK.), Philip Tomasino (Mississauga, ON.), Peyton Krebs (Okotoks, AB.), and Connor Zary (Saskatoon, SK.) all find themselves in a similar position, as each one has exemplified a tremendously unique skill set so far. Dach, being the only one with NHL experience, is seemingly the unanimous favourite to lead Canada’s centre group, and for good reason. With elite hands and playmaking ability, his creativity alone allows him to rise above everyone else.

Dach’s NHL experience should give Canada an advantage

Krebs and Zary fill out the rest of Canada’s needs down the middle, as both have enjoyed an incredibly successful camp. Krebs can not only quarterback a power play, but his two-way ability and effectiveness at both ends of the ice is something that every team needs. Captaining the Winnipeg Ice (WHL) this past season, it’ll be Krebs’ vision and all-around ability that will lead him towards a prominent role with Team Canada.

Zary, who has the ability to shift to the wing, brings mobility and a physical presence to the team. Add an above-average scoring touch to that mix, and Zary could find himself in any in-game situation. While I originally had him on the outside looking in to begin camp, he found instantaneous chemistry with Dach and Tomasino while also contributing in his own fashion. His shot placement and his ability to find the puck at top speed make him an ideal linemate for a distributor.

Tomasino, an Oshawa Generals (OHL) standout, has also reached another level of success as selection camp draws on. Possessing a “lightning-quick first step and high-end foot speed” (Future Considerations, 2019) to go along with a dynamic release and a knack for the high-danger areas of the ice, he brings another offensively-driven threat to Team Canada’s lineup. 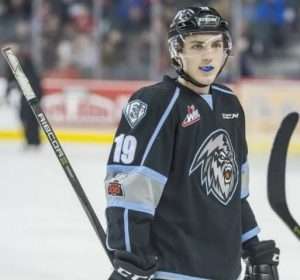 Krebs provides another level of depth to the Canadian lineup

Expect to see Winnipeg Jets’ prospect Cole Perfetti (Whitby, ON.) crack the lineup on his second attempt as well, considering he enjoyed an even more productive season with the Saginaw Spirit (OHL). While not having the most electrifying presence in Red Deer so far, the Whitby-native should bring a potent scoring touch in whatever role he’s placed in. Already having played with the national team at the 2019 Hlinka Gretzky Cup, Perfetti also brings a wealth of international experience.

Following an impressive rookie season with Boston College (NCAA), Alex Newhook (St. John’s, NL.) has the best chance to make the team out of the crop of NCAA players. Notching an impressive 42 points in 34 games last season, he has proven his worth at every level of hockey he’s played, and his explosive skating ability and high-octane mindset should give him the edge over other players in the main cohort.

Rounding out the forward group are two wild cards that Canada can interchange at will. For now, Jakob Pelletier (Quebec City, QB.) and Jamieson Rees (Hamilton, ON.) are my picks to fill in on the fourth line, as the pair have been standouts in both of Canada’s scrimmages. Pelletier, who has captained both the Moncton Wildcats (QMJHL) and the Val-d’Or Foreurs (QMJHL) while simultaneously posting impressive point totals, would be a valuable offensive talent on any fourth line. Rees, with his ability to track down loose pucks and engage in the high-danger areas of the ice, make him an ideal role player for the Canadians.

Jack Quinn (Cobden, ON.) and Samuel Poulin (Blainville, QC.) should also make the team and could find themselves in the lineup on any given night. Both present a contrasting style of play to one another and could be an effective replacement in any situation. Quinn, the 8th overall selection this past summer, is an elite goal scorer who can find the back of the net from almost any area of the ice, while Poulin, a Pittsburgh Penguins prospect, is a traditional power forward who exemplifies an ideal two-way game. The two haven’t been as notable through the first half of selection camp. However, their talent and potential speak for themselves.

Justin Barron (Halifax, NS.) and Kaedan Korczak (Yorkton, SK.) are the leading candidates to round out Canada’s defensive core. Both have made impactful contributions during the two intrasquad scrimmages, and both provide an increased level of depth on the blue line. Barron, who enjoys jumping into the rush and creating chances offensively, should have the confidence that Korczak, who loves to “physically engage opposing forwards” (McKeen’s Hockey, 2019), has his back.

Similar to previous years, Canada’s goaltending battle has yet to crown a winner. They’ll carry three goalies into the bubble, and it remains to be seen who those three netminders will be. Brett Brochu (Tilbury, ON.), who registered an impressive .919 save percentage (SV%) and 2.40 goals against average (GAA) with the London Knights (OHL) during the 2019-20 campaign, has been nothing short of spectacular thus far, so it would be fathomable to see the 18-year-old take the starting job.

With that said, Brochu certainly wasn’t the favourite heading into camp, and Taylor Gauthier (Calgary, AB.), who has played just as much, still has a legitimate chance to command the crease for Canada. Gauthier, who saw all 60 minutes of action during the second scrimmage, put up similar numbers with the Prince George Cougars (WHL) during the 2019-20 season. He hasn’t exactly set himself apart just yet, but in terms of his competition, Gauthier is right in the thick of it.

Due to Brochu’s stellar play, it seems as though the other half of Team Red’s tandem has overshadowed Dylan Garand (Victoria, B.C.). However, let’s not forget that Garand played just as well in the first scrimmage before leaving the net in favour of Brochu. Garand holds the best numbers in the CHL out of the three frontrunners, with a .921 SV% and a 2.21 GAA with the Kamloops Blazers (WHL).

Garand is still in the hunt for Canada’s starting job

While Canada’s goaltending competition has remained unclear at best, Tristan Lennox (Mississauga, ON.) and Devon Levi (Dollard-des-Ormeaux, QC.) have not yet made as significant of an impact, separating the goaltending debate into two tiers.

In what will be an unprecedented World Junior tournament, there is still a lot that needs to be decided by the Canadians moving forward. However, with a solid projection of Team Canada’s lineup, hopefully, the excitement of the World Juniors can begin to be felt nationwide.