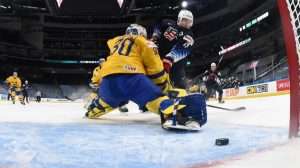 Alex Turcotte (#15) scores the U.S.’s fourth goal in the 4-0 New Year’s Eve victory over Sweden to win Group B

The U.S. blanked Sweden 4-0 on New Year’s Eve at Rogers Place to earn first place in Group B. In Tuesday’s quarter-finals, the U.S. will face Slovakia, while third-place Sweden battles archrival Finland.

“The strength of this group is that they care about each other and they’re playing for each other,” said U.S. head coach Nate Leaman. “I think we’ve got a lot of leaders that will lead at different times in different ways.”

The Juniorkronorna had a nightmare start, surrendering two goals on the U.S.’s first five shots, and they couldn’t bounce back. The U.S. outshot Sweden 37-27.

“They got two pretty much [bad] goals there in the beginning,” said Swedish defenceman Victor Soderstrom. “They threw the puck on the net and scored. So I think that was a pretty tough start. And then we didn’t really come back after that. I think we tried. But if you go back and look at the game, I think we needed to shoot a little bit more on the net and be more hungry.”

In goal, Swedish head coach Joel Ronnmark went back to returning starter Hugo Alnefelt, who played in the 7-1 win over the Czechs and 4-0 win over Austria. Unfortunately, the 19-year-old HV71 netminder allowed four goals on 21 shots and was pulled in favour of Jesper Wallstedt early in the second period.

“[Alnefelt] had a bit of a tough start during the game, but sometimes that happens,” said Ronnmark. “And he’s really been standing on his head for us a lot of times too. It was a no-brainer for me to put him in for tonight’s game.”

With Wallstedt recording 31 saves, the Swedes had their record 54-game preliminary-round winning streak snapped with a 4-3 overtime loss to Russia on Wednesday.

Knight, who was pulled in the opening 5-3 loss to Russia and earned a 7-0 shutout against the Czechs, looked good in his third World Junior appearance this year under coach Nate Leaman.

The U.S. drew first blood at 1:09, as Alnefelt misplayed John Farrnacci’s long shot off his glove and Drew Helleson’s bad-angle shot from the corner surprised the goalie.

At 3:58, Zegras, the 2019 first-round pick of the Anaheim Ducks (ninth overall), golfed a shot from the side boards that flew over Alnefelt’s right shoulder on the short side.

“I think I’m shooting the puck more,” said Zegras. “I think I have a little more confidence in those areas. And I’m playing with two great players, Arthur Kaliyev and Alex Turcotte. They’re putting me in some really good spots.”

Meanwhile, Knight denied sniper Lucas Raymond on a glorious chance from the slot. And Alexander Holtz misfired on a dangerous-looking mid-period 2-on-1 rush with Raymond.

“He’s always been really mentally tough,” said York of Knight. “Whenever he comes off a tough game, he always seems to rebound.”

At 2:00 of the second period, Ryan Johnson got the puck from Zegras after a faceoff in the Swedish zone, skated into the left faceoff circle, and beat Alnefelt high to the glove side for a 3-0 lead.

At 3:34, Swedish forward Arvid Costmar broke into the clear and was hooked by Jackson LaCombe, leading to a penalty shot. Assistant captain Victor Soderstrom was chosen to take the attempt. The top Arizona Coyotes prospect skated in and tried to deke Knight, but the puck drifted off his stick. It was that kind of night for the boys in blue and yellow.

“The coach asked me if I wanted to take it and I didn’t hesitate,” said Soderstrom. “I can’t remember the last time that happened, but it happens, and it happens to everyone.”

Just 21 seconds later, Turcotte got loose in front of Alnefelt and pivoted to bury his first goal of the tournament. At last, Ronnmark mercifully put Wallstedt in, and the highly touted 18-year-old wouldn’t allow a goal the rest of the way.

Knight was lucky as well as good. Near the 13-minute mark, Albin Sundsvik had a marvelous chance to convert a wraparound, but Knight, who had missed the initial U.S. shot, stuck out his right pad to foil the Swedish forward. On a power play late in the second, Elmer Soderblom had the goalie beaten, but rang it off the post.

In the scoreless third period, Sweden’s rough night continued. On an offside at the U.S. blue line, Tyler Kleven thumped Swedish captain Philip Broberg, who seemed to be labouring for the second straight game, with a late hit.

“The start tonight was huge,” said York. “I thought it really got our whole group going. But at the end of the day, our focus is winning a gold medal. And today was a big step in that direction.”

This was Sweden’s first regulation-time defeat in the preliminary round since losing 2-0 to Canada on 26 December 2006 in Leksand. Luc Bourdon and Brad Marchand scored for the Canadians and Carey Price had a 31-save shutout.

The last time Sweden lost two consecutive round-robin games at a World Juniors was at the 2005 tournament in Grand Forks, North Dakota and Thief River Falls, Minnesota. Sweden lost 8-1 to Canada on 27 December and 5-4 to Finland on 29 December.

With this win, the U.S.’s all-time record against Sweden improved to 16 wins, one tie, and 18 losses. The last time these nations faced off at the World Juniors was on 29 December 2018, when Adam Boqvist scored the 5-4 overtime winner in Victoria. In their lone gold-medal game meeting, the U.S. defeated Sweden 3-1 in 2013 in Ufa, Russia.

Zegras now has 22 career World Junior points. That ties him with James van Riemsdyk (2007-09) for third place among Americans, and puts him within striking range of all-time U.S. leader Jordan Schroeder (27 points, 2008-10). Yet right now, team goals take precedence over individual achievements, and that goes for all eight quarter-final teams.