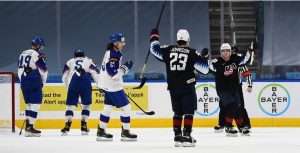 The U.S. celebrates after John Farinacci’s second-period goal in a 5-2 quarter-final win over Slovakia at the 2021 IIHF World Junior Championships

With patience, skill, and a balanced attack, the Americans defeated gutsy Slovakia 5-2 in Saturday’s last quarter-final at Edmonton’s Rogers Place. The U.S. will take on Finland in the semi-finals on Monday, while host Canada battles Russia.

“I think both teams have progressed,” said the U.S.’s Ryan Johnson about facing the Finns. “Watching Finland, they look a lot better. Same with us as well. I think it’ll be a good matchup.”

John Farinacci stepped up with two goals, and Arthur Kaliyev, Cole Caufield, and Matthew Beniers also scored for the Americans. Tournament scoring leader Trevor Zegras and Bobby Brink each chipped in a pair of assists.

U.S. coach Nate Leaman’s team set a World Junior record with a shutout streak of 218:53. It ended when Slovakia’s Matej Kaslik scored late in the second period. The last goal the Americans had surrendered was Yegor Chinakhov’s empty-netter with 21 seconds left in the 5-3 opening loss to Russia.

Dominik Sojka had the other goal for Slovakia, which finished eighth for the third straight year.

It was a goaltending duel between American starter Spencer Knight and Slovakia’s Simon Latkoczky, who kept his team in it as shots favored the U.S. 43-18. Slovak coach Robert Petrovicky opted for the 18-year-old World Junior rookie Latkoczy, who entered with a 1.94 GAA and 93.3 save percentage, over three-time tournament participant Samuel Hlavaj.

“I think he played well all the time,” said Slovak captain Samuel Knazko. “The goalies are the best players in our team at this tournament. So I think he did a great job today.”

With four all-time gold medals (2004, 2010, 2013, 2017), the Americans now have their sights set on another title. They have a history with their semi-final opponent. They lost the 2019 final to Finland and finished fifth last year with a quarter-final loss to the Finns.

“I watched all the other games today,” said Leaman. “Russia had to go through it. Finland found a way to come back, and Canada got in too. This is a tough round, the quarter-finals, a very tough round. You’ve got to knock somebody out of the tournament. We’re going to refocus and get ready for Finland. It’ll be a big game. Obviously that’s the team that knocked us out of the tournament last year.”

Meanwhile, the Slovaks have a total of two bronze medals (1999, 2015) in World Junior history.

Petrovicky expressed optimism about the future of Slovak hockey: “We brought lots of young, talented players with us. They showed lots of potential. And we have a few more young players coming out. We just have to work with them and believe they can develop into players. We are not afraid to give them a chance if they work hard and want to get better every day.”

The Americans came in dominating on special teams, with their power play clicking at 40 percent (6-for-15) and their penalty kill functioning perfectly (0 goals allowed on 5 disadvantages). Their discipline wasn’t as impeccable against Slovakia, but they still found a way to prevail.

After killing off an early Slovak man advantage, the U.S. made it 1-0 on the power play at 10:44 with precision puck movement. From the goal line, Matthew Boldy found Kaliyev cross-crease with a no-look pass. It was the second goal of the tournament for the longtime star of the OHL’s Hamilton Bulldogs.

Late in the first, Zegras looked shaken up on an open-ice hit by Slovakia’s Oliver Turan, a 196-cm, 96-kg defenceman. However, the future Anaheim Ducks forward was right back out there to start the second period.

Early in the middle frame, Caufield, who turned 20 on Saturday, was denied by Latkoczy on a breakaway and couldn’t convert his rebound. A few minutes later, the Slovak goalie was equal to the challenge when Alex Turcotte broke in alone.

Even though the Slovaks strove to slow the pace, patience paid off for the Americans. Johnson’s wrist shot from the left point deflected off Farinacci at 11:55 to make it 2-0.

With 3:07 left in the middle frame, Caufield got his birthday present with a 5-on-3 man advantage, as he rifled a shot bar down for a 3-0 lead and his second goal of the tournament. Caufield, a top Montreal Canadiens prospect who was named the Big Ten Freshman of the Year with the University of Wisconsin last year, tied Alexander Ovechkin’s single-tournament U18 Worlds goal record (14) in 2019.

Kaslik finally got Slovakia on the board at 18:32, hammering home a slap shot after a U.S. defensive breakdown in the high slot.

“I think we started well in the third period,” said Latkoczy. “We played like a team. We said a couple of things in the locker room during the intermission, that these were probably our last 20 minutes and we wanted to do our best in the tournament.”

At 9:50 of the third, Sojka scored the first power-play goal the U.S. penalty-killers have allowed in Edmonton, tipping in Knazko’s left point shot.

However, that was as close as the underdog Slovaks would get. Farinacci stepped out from behind Latkoczy’s cage and scored on a backhanded wraparound at 15:46 to restore the U.S.’s two-goal gap.

“I kind of got caught behind the net there,” Farinacci said. “I saw the D leave the net front and I just tried to wrap it around. Fortunately it went in.”

Petrovicky pulled Latkoczky for the extra attacker, but Beniers scored an empty-netter with 1:24 remaining to seal the 5-2 victory.

This game was a revenge of sorts for Leaman. At his last World Juniors in 2009 in Ottawa, he was an assistant to Ron Rolston when Slovakia eliminated the U.S. with a 5-3 quarter-final upset. That was the only previous quarter-final meeting between these nations.

All that matters now for America, though, is winning Monday’s semi-final against the never-say-die Finns, who rallied to defeat Sweden 3-2 in their quarter-final