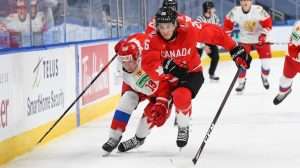 As it has every game this tournament, Canada roared out to an early lead and never looked back. Tonight, Russia was the victim, and the 5-0 score was richly deserved by the more determined and aggressive Canadians.

The win vaults Canada into the gold-medal game tomorrow night and puts the Russians in the bronze-medal game earlier in the day.

Devon Levi stopped 28 shots for his third shutout, tying Justin Pogge for the U20 record for one tournament. For Russia, it was their most one-sided loss in the semi-finals since the playoff format was introduced in 1996.And, it was Canada’s first shutout over Russia since 2006 (14 games).

Dyman Cozens led Canada with a goal and two assists. He now leads the tournament in both goals (8) and points (16).

“That’s hockey,” Russian captain Vasili Podkolzin said. “It’s a game, and these things happen. Congrats to team Canada. They did a great job and deserved the win. We should have played better.”

The fun started early and in the strangest way imaginable. Alex Newhook had a great opening shift, culminating with a quick shot in front after he picked up a loose puck to the side of the net that Zakhar Bardakov tried to bat out of harm’s way.

Newhook whipped a shot that went in and out so quickly even he didn’t realize it. Play continued for 30 seconds and then the official timekeeper blew his horn to stop play, a most unusual occurrence. The referees then reviewed the play and quickly ruled it a goal, the official time being 0:59.

“I actually had no idea it went in,” he acknowledged. “I thought it hit the crossbar, but when you get an early chance like that and put it away, it’s great for the team.”

The Canadians increased their lead midway through the period thanks to a great pass by Jacob Pelletier to Connor McMichael to the back side of the play. He fought off defenceman Yan Kuznetsov and snapped the puck into the open cage.

Canada’s sensational period continued with a third goal, this from Cole Perfetti during a four-minute power play. He came off the point and from the top of the circle wired a shot under the glove of Askarov to the far side at 15:05, and the Russians left the ice after 20 minutes in a state of shock.

Nothing changed after the intermission, and Canada’s incredible puck pressure led to its fourth goal at 4:09. This time Askarov lost his stick and whole he was trying to get it from Semyon Chistyakov the Canadians moved the puck around, setting up Braden Schneider. His shot beat the goalie to the glove side again.

The Russians finally got their first power play of the night late in the period and scored after some good puck movement, but no sooner was it in the net than Canada challenged the play for offside. After a lengthy review, it was clear the puck entered the Canadian zone ahead of the play, and the goal was cancelled.

Captain Dylan Cozens was awarded a penalty shot with 29.4 seconds remaining after a determined effort in centre ice created a breakaway, but he was slashed on the play from behind. Askarov made a nice right-toe save, though, keeping the score at 4-0.

Canada stifled every Russain attempt in the third period to rush the puck, pinch, create offence. The closest they came to getting back into the game was a his post off a drifting point shot by Shakir Mkhamadullin with about seven minutes remaining.

Levi brought a moment of excitement to the game when he fielded the puck behind his own goal and took aim at the empty cage at the other end. His shot, however, hit a teammate in the back.

Cozens scored an empty netter at 18:31 to finish the scoring.