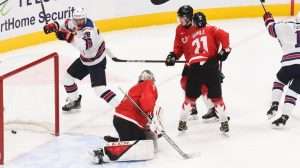 Arthur Kaliyev and Alex Turcotte celebrate a Team USA goal in the gold-medal-game win against the U.S.

Trevor Zegras had a goal and assist and Spencer Knight was terrific in goal for the Americans as they won their fifth all-time gold medal with a flawless 2-0 win over Canada. It was a game of tight checking and stifling defence, blocked shots, great saves, and few great scoring chances.

This was the fifth time the North Americans have met for gold, and after losing the first one the U.S. has now won the last four.

Knight was particularly sensational in the third period as Canada tried everything to get a goal. Shots were 15-1 in the last 20 minutes, and 34-21 overall for Canada, but Knight stopped them all.

With his two points,  Zegras wins the scoring title with 18 points to go with being named tournament MVP.

This game was also the 12th shutout of the tournament, surpassing 2004 for the most in one U20 event. And, it was the lowest-scoring game between the two countries since a 1-1 tie in Winnipeg in 1999.

It was clear from the early going that Canada was going to continue its game of puck pressure, but equally clear that the Americans could handle the strategy by moving the puck quickly. Canada controlled the early going in this way, but unlike all previous games when it got an early goal to create some forward momentum, the U.S. held the fort and slowly but surely wrested control from the hosts.

This change of pressure from Canada to the United States resulted in a period of sustained pressure inside the Canada end, and as the defensive players wore down the Americans forced the issue. Zegras got the puck back to the point where Drew Helleson took a quick shot that was tipped in front by Alex Turcotte, beating Levi at 13:25.

That goal alone ended Levi’s bid for a record fourth shutout, another bid for the longest shutout sequence, and Canada’s bid for going through the tournament without trailing.

More important, the goal energized the U.S., and they came right back with another great shift. That momentum was dulled by a tripping penalty, the first to either side in a period in which the referees let the players play. On the ensuing power play Canada was all over the Americans, but Knight stood tall in goal and Canada misfired when it mattered most.

It was still a 1-0 game after 20 minutes, but Canada went to the dressing room feeling better while the U.S. was very happy with its period.

It was the Americans, though, who started the second firing on all cylinders, and just 32 seconds in they made it 2-0. Canada failed to get the puck out, and a quick shot by Arthur Kailyev went wide. But Levi thought the puck was coming out to his left, and instead it came out the other side where Zegras flipped it into the empty cage.

Canada dominated the rest of the period, but it encountered two problems it hadn’t previously. One, the players started to miss great chances they usually buried. Two, Knight was playing flawlessly in the blue ice.

Bo Byram joined the rush on a short-handed odd-man rush, and his shot off the deke hit the post. Quinton Byfield had a great chance in front but shot wide, and Braden Schneider was stopped from in close by the glove of Knight.

In all, Canada couldn’t buy a goal despite leading the tournament with 41 through six games.

In the third, Knight was the difference, to be sure, but the Americans gave Canada the puck but little time to do anything. The result was plenty of puck possession but not many bona fide chances.