Serbia: Culture shock, for better or for worse 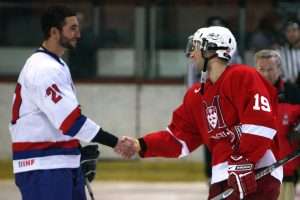 Daniel Jacob, assistant coach with the Laval Rocket, and his ex-teammate Marko Kovacevic

As many young Quebecers are doing now, Daniel Jacob was watching the World Junior Championship during his Christmas break.

And like a tiny minority of these young people, the one who is now an assistant coach with the Laval Rocket was able to live his dream: he took part in the World Hockey Championship, not once, but twice.

And he wasn’t playing for Canada, but rather for Serbia.

The Serbian experience has been fruitful on all fronts. He had a great hockey experience, he met his wife, Danica, and left there with a passport. Today, Daniel Jacob maintains very close ties with his former adopted country.

Professional hockey is generally played in areas where the standard of living is relatively high. Jacob, incidentally, played a season in Sweden after his four-year college career at McGill University.

Then, in 2006, he landed in Serbia, on the recommendation of another McGill player, Marko Kovacevic. His new home was in Novi Sad, the country’s second largest city. A pretty place, at first glance. “A mini-Prague! describes Jacob. There is a fortress, a magnificent church in the city center. There are Austro-Hungarian and Turkish influences. Small  cobblestone streets. Everything is beautiful ! “

But Serbia also comes in 38th place (out of 43 countries) in Europe for the Human Development Index of the UN, which measures the quality of life. Jacob quickly realized that he was setting foot in a society plagued by great social inequalities.

“I remember, we arrive at an intersection, in the light, there was a gypsy with his horse or his donkey, and right next to it, a BMW. It is a world of contrasts. It struck us, we are used to having a middle class. We quickly realized that we were making a good living in the country. “

Culture shock was as much daily as it was at the arena. Serbia is obviously not the birthplace of hockey. The most recent annual report of the International Ice Hockey Federation (IIHF) tells us that there are 4 ice rinks in the country and that there are a total of 714 players, for a country of 7.2 million inhabitants . By comparison, Canada has 7,800 rinks and 600,000 players, according to the same report.

“You make the jump quickly. Ice hours were not a problem, since the sport is not very popular, he recalls. Culturally, it’s quite different. Practice at 8 a.m., it’s not a big deal if it starts at 8:25 a.m.! “

According to Daniel Jacob, this wobbly side also explains why foreign players are rare in Serbia. In Canada, we earned a decent average salary“ But in Serbia players have a second job. There are delays, the check does not come in on the scheduled day. Serbia isn’t all wrong, but there was no direct deposit, let’s say. It may be harder for those who play for the money. “

A program for young people

We understand quite quickly: Daniel Jacob was not playing “for the money”. His season in Sweden had left him unsatisfied, and he was looking for a real life experience by traveling to Serbia, in the company of his friend Marc-André Fournier, another McGill alumni.

“The deal breaker was that we were dealing with a program for young people. In Sweden, I found it redundant to just get up and go to the arena. I would have liked to get more involved. “

“We won 20 CCM Hockey Gear Carry Bags [via Goals & Dreams]. McGill sent us 10 bags of equipment. Even though it was used, it was super good quality, because a used skate here is still good there. We helped the young people in English, and they helped us in Serbian. “ 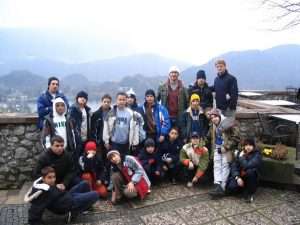 U12 tournament in Bled, Slovenia

Because yes, Jacob learned Serbian there, which he still speaks today, for the simple reason that he met his wife there, that they have a house there and that they return there. every year to visit the family.

“I’m doing very, very well. On the other hand, there are verbs, that, I still have no understanding, so I make a lot of mistakes! It’s erratic, but I make myself understood. My son speaks it, and for us it’s important that he can communicate with his grandparents. My wife speaks to him in Serbian at home. “

Which brings us back to the 2009 World Championship. In the eyes of the IIHF, for a player to be able to change his nationality, he must be a citizen of the country and must have played at least two seasons in a row in that country. (four seasons for players who have already represented another country on the international stage).

So Daniel Jacob fulfilled these conditions. “Otherwise, I’m sure they would have found a way!” he laughs. We had to go to Belgrade to present our case. Novi Sad was the host city of the tournament and the owner of our club looked after the national team. It was important to him. One hour before the unveiling of the training sessions, we came back from Belgrade with our passports! “

As we said, it was obviously not the highest level. But against China, North Korea, Iceland, Israel and Estonia, Serbia finished first in their group, securing promotion to the second division.

In 2010, the Serbs were therefore disembarked in Tilburg, Netherlands, in a group that includes the Netherlands, Ukraine, Japan, Lithuania and Austria. Unable to find the results from official sources, the IIHF archives being inaccessible. According to Wikipedia, however, Serbia lost their first game 13-0 against Austria. Really ?

” Yes sir ! We arrived there with a rounded chest. But Austria was serious, and the equipment manager ordered us roller hockey sticks! They had 70 flex … It was like play with spaghetti!

But hey, Daniel Jacob has no bitterness when he recounts the event. Basically, it was precisely this rudimentary aspect that had attracted him to Serbia. And this is what allows him today to teach life lessons to his son, Teodor. 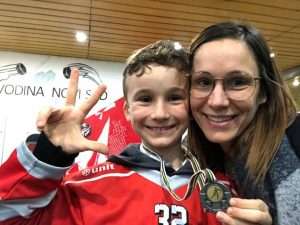 My son went back over there during spring break, just before the pandemic, to visit his grandparents. There was a friendly tournament in Novi Sad. My son brought his skates and he was able to participate, but they loaned him the rest of the equipment. His first reaction when he saw the equipment: “Well, what is that?” It was a nice reality check for my son. I was glad he saw it. “