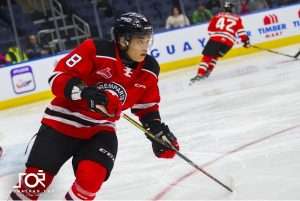 Teenager Yu Sato, who has already played for teams on three continents, is aiming to become the first Japanese forward in the National Hockey League.

Japanese ice hockey player Yu Sato has already played on three continents. Now the native of Saitama is aiming to take his game to the highest level with dreams of becoming the first Japanese forward in the National Hockey League.

Sato helped Japan win the gold medal at an Under-20 Division II tournament at the International Ice Hockey Federation’s world championships in January. The talented 18-year-old forward also had a stint with the Quebec Remparts, one of the most storied teams in Canadian junior hockey.

Ice hockey has a long history in Japan but has struggled for recognition against more popular sports like baseball, soccer and rugby. That may change if a player like Sato could make it in the NHL.

In Quebec, the 5-foot-10 (178 cm), 175-pound (79.3 kg) Sato was coached by Patrick Roy, a Hall of Fame goaltender who had a stellar 19-year NHL career with the Montreal Canadiens and Colorado Avalanche. He was also coach and vice president of hockey operations with the Avalanche.

Roy said he was impressed with the play of Sato while he was in Quebec during the 2019-20 season.

“He’s a good skater, he sees the ice very well and overall he’s a quality person,” Roy said. “It’s a big change, obviously the culture is totally different but he seems to adapt very well.” 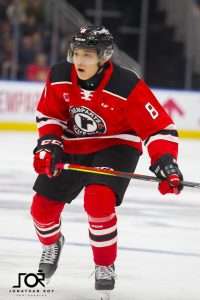 Forward Yu Sato played for the Quebec Remparts in 2019-20

Japan has never had a player in the NHL other than goaltender Yutaka Fukufuji, who had a brief stint with the Los Angeles Kings in 2006-07.

There have been plenty of players of Japanese descent, like Paul Kariya and, more recently, Nick Suzuki, but a forward born and bred in Japan has never made it to the world’s most competitive league.

Sato got his start in hockey near his hometown with the Saitama Junior Warriors, a youth development team that also produced Aito Iguchi, who became an internet sensation when a video of him displaying his dazzling stick handling skills at the age of 11 went viral.

There was a time when ice hockey was primarily played on Japan’s northernmost island of Hokkaido but due to several factors, including economic ones, the game is spreading to more populous regions like Saitama, which is just north of Tokyo.

Like many young Japanese players with talent, Sato, who plays left wing, knew that he needed to go overseas to fully develop as a player, so it was off to Moscow at the tender age of 11. He played for Krylia Sovetov in the junior hockey ranks in 2017-18, scoring 14 goals with 13 assists in 27 games.

He then spent another season in Finland before ending up with the Remparts for the 2019-20 season.

The Remparts are one of the league’s oldest teams and play in the 18,000-seat Videotron Center in Quebec City. Over the years the team has produced such hockey luminaries as Mario Lemieux and Guy Lafleur.

After the league shut down in late November due to the COVID-19 pandemic, Sato moved to the Lincoln Stars of the United States Hockey League. Playing in 12 of the team’s 13 games through January 9, he recorded five assists.

During his stint in Quebec, Sato got to play against some of the best young players in the game, including Alexis Lafreniere who was selected first overall by the New York Rangers in the NHL Entry Draft on October 7, 2020.

Sato struggled with injuries early on during his time with Quebec and scored four goals and had six assists in 39 games.

“I think maybe he put too much pressure on himself,” Roy said. “The stats will come so statistics are not the main thing for him. We wanted him to develop into the best player he can be and I like what I’ve seen so far.”

Clearly, Sato’s time in Quebec and his team’s performance at the worlds in Lithuania show ice hockey in Japan is making progress.

“I think a lot of it is younger players like Sato have so much more access to information than players did a while ago,” said Chris Wakabayashi, director and GM of the Asia League’s Tohoku Free Blades. “They can go overseas and get valuable experience and that’s a huge factor.”

Wakabayashi, a Japanese-Canadian who has had a long coaching career in Japan, says he sees a lot of changes in the game here that bode well for the future.

“You see more kids like Sato in the Tokyo area getting into the sport,” said Wakabayashi. “There is now a professional team in Yokohama [Asia League expansion squad Yokohama Grits] and there is a lot of improvement in the level of coaching.”

Sato will be eligible for next year’s NHL draft and Wakabayashi said he thinks the young native of Saitama has the potential to someday make it with an NHL team.

“He already has a lot of international experience so I think he has a chance,” Wakabayashi said. “If a player like Sato was ever to make it in the NHL it would take the game to another level here.”