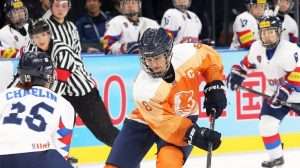 If you ask young female hockey players in the Netherlands who their favourite player is, chances are they will all have the same answer.

Van der Linden has seen Wielenga go from national team rookie to team captain and the face of women’s hockey in the Netherlands. Now over 13 years since her first World Championship tournament, Wielenga is helping lead her country that historically earned promotion to the Division I Group A – the highest level the Dutch women’s program has competed in yet.

Van der Linden, a former national team player, was impressed the first time she met Wielenga. “I saw her and I was thinking, woah, she has a lot of talent,” she said. “She’s a smart player, she’s a social player… she’s complete.”

Since making her international debut in 2007, Wielenga’s hockey career has taken her from the Netherlands to Sweden twice. While she originally dreamed of playing in North America after high school, Wielenga decided to further her hockey skills in Sweden after receiving an offer from Linkoping HC. She joined the team for the 2007/08 season, but was unfortunately sidelined for much of it due to an injury.

“I finished the season there, but I went home after to recover, mentally mostly, and then I started studying in Amsterdam,” said Wielenga. “From that I rolled into a really good job that I still have.”

After a decade of playing on various teams in the second- and third-tier men’s leagues of her country, she received another offer from Sweden that she couldn’t pass up.

“[In 2019], I got another e-mail from Sweden from a different club [SDE HF]. That made me think, oh it would be cool – I’m near the end of my career – to do another year or two at the highest level in Europe while I still can. I always had a sort of revenge feeling for that first year in Sweden that wasn’t a success, and I got the chance now.”

Last season with SDE HF, Wielenga contributed 11 goals and 11 assists through 36 games. The team had one of its best seasons yet, securing more wins and goals and allowing fewer goals against than it ever has in the top Swedish women’s hockey league SDHL.

Wielenga is back on SDE HF’s roster for the 2020/21 season and has contributed six goals and four assists in 19 games. And she hopes she can use her experience at that level for the national team once international women’s hockey will be back.

After being relegated to the Division II Group A in 2016, the Netherlands quickly rebounded, winning gold in 2018. In 2019 they took it one step further, winning Division I Group B gold for the first time to earn promotion to Division I Group A. 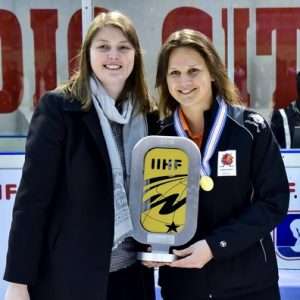 Wielenga had one of her best World Championship appearances yet in 2019. For the first time in her career, she led the tournament in goals (8) and points (10, tied with Korea’s Jongah Park). She also received her first ever Best Forward award and was named her team’s Top Player for the first time since 2009.

A humble leader, Wielenga attributes her team’s success to an increased focus on off-ice training and, most notably, the addition of players from the Dutch U18 women’s national team, which made its IIHF debut in 2018.

“[The U18 team] keeps that group of younger girls together. When I joined the national team, I was the only one from my year,” explained Wielenga. “We all would add to the national team individually and now they come in little groups and they already have some national team experience from the under-18s.”

Many of the country’s up-and-coming players are given opportunities to practise with the senior national team throughout the year, introducing them to a high performance environment. It also gives them a goal to reach for.

“They have another reason to keep playing hockey, which is the national team,” said Wielenga. “If you only play with boys, you might be the only girl on your team. It’s really common that [girls] quit after a couple years… So with the under-18 team being there, early on they get a feeling of how it is to play for your country.”

The Netherlands has made great strides over the last few years, winning back-to-back golds and seeing the launch of the U18 women’s program. Despite the cancellation of the 2020 and 2021 tournaments due to COVID-19 forcing a delay in making it to the Division I Group A competition, Wielenga and her teammates are remaining focused and determined.

“We just want to prove that it wasn’t by accident that we moved up two years in a row. I think we can really play with the countries above us,” she said. “We have so much passion for the sport… we all play because we want to play, and I think that’s the most important thing.”

While Wielenga can still play hockey as top-level senior hockey is allowed in Sweden, rules have been stricter in the Netherlands where no games have been played in any league since October.

Once hockey is back, the Netherlands will play in the Olympic Pre-Qualification Round 2 next October where Poland, Mexico and Turkey will be the opponents for a berth in the final round in the qualification for Beijing 2022.

In the 2022 IIHF Ice Hockey Women’s World Championship Division I Group A the Dutch will play Sweden, France, Norway, Austria and Slovenia.