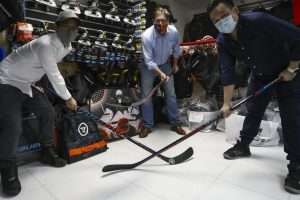 Daryl Wong, Gregory Smyth and Keith Fong say the government needs to take into account the negative impact of not being able to play sports

The Hong Kong government’s restrictions in fighting the coronavirus might now be doing more harm than good, says the co-founder and director of the China Hockey Group, Gregory Smyth.

The city’s hockey scene, which includes ice, inline and ball, has more than 1,200 regular participants, and the majority are kids. Smyth said children should be out playing sports right now, not sitting at home.

Smyth’s CHG runs the Junior Tigers, which has hundreds of youth players who have endured three ice rink shutdowns and  more than 140 days without the ability to play.  He said CHG will survive thanks to strong shareholders, but he feels the physical and mental toll may bring the largest cost.

“The big impact is on the parents and the kids,” said Smyth, who launched an elite men’s ice hockey tournament in the mid-1990s in his first official foray into the sport in Hong Kong. “The kids aren’t getting enough exercise. They’re getting depressed, they’re online all the time, they’re on devices and parents have to look after these kids if they’re not in school. It has a pretty negative impact.”

Smyth said he understands the need to fight the pandemic, but feels as if the government’s restrictions have gone too far.

Smyth said ice hockey, which has roots in Hong Kong dating back three decades, also stands on the precipice of exploding. Two new ice rinks were to open just before the pandemic swept in early last year – a sheet in Discovery Bay and one at The Lohas, a new development in Siu Chik Sha.

This would bring the city’s total to five ice rinks, and allow for a massive expansion in terms of players, coaches and jobs. Each rink also hosts daily public skating and figure skating, helping bring in revenue given ice rinks are expensive to run and maintain.

“The sport is ready to boom and the next generation is there,” said Smyth. “This isn’t an expat sport. Our Junior Tigers programme is probably 80 per cent Chinese, so we’ve been able to introduce the sport quite well and grow it locally. We have a number of parents that have gone to school overseas and experienced it and then come back and have their kids play here.”

Hong Kong’s sport and recreation community finds itself suffering through blanket restrictions that have lumped outdoor sports with indoor sports. Smyth said one of the oddest things is the CHG runs games and practices out of Mega Ice, which is located within the Mega Box shopping complex in Kowloon Bay. 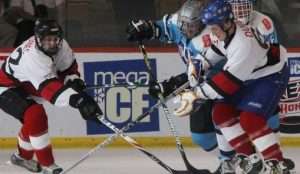 “The mall is open and full of people all the time, but the rink is closed. Figure that one out.”

Hong Kong’s fourth wave has now dragged on for months, and sports venues and gyms have been locked down since early December with no end in sight. Reports are the government isn’t considering lifting any current restrictions until well after the Lunar New Year, which runs from February 12-15.

Keith Fong, CEO of Powerplay Sports & Entertainment, which runs the inline league at the Jordan YMCA, and who has been involved in the city’s overall hockey scene for more than 20 years, said there is also an issue when it comes to Hong Kong’s geography.

Ice hockey’s hot beds lie in countries like Canada, the US and all over Scandinavia and Russia, where kids have massive green spaces and outdoor options to fill in the void of not being able to play. Hong Kong, although littered with country parks and hiking trails, pales in comparison, and also has some of the most cramped living spaces in the developed world.

“It’s different than say, in North America, where you might at least have a backyard,” said Fong, who was the coach of the National Hong Kong Inline Hockey team that competed in the 2018 Asian Roller Games in South Korea.

“But you know we’re cooped up here in four or five hundred square feet apartments, if that. So that’s where I come from when I look at this and its impact. There are no real alternatives for these kids right now.”

The closures have invariably hit the hockey scene’s coaches, which includes Daryl Wong. He works as an after school activity service provider, running inline lessons as well as ball hockey. He said he has received two government relief grants, one for HK$7,500 and another for $5,000, but they have done little to help his financial situation.

“It’s been quite frustrating to not be able to put effort into the career I chose to do. I have had to scale down,” said Wong, who is also an inline goaltender.

Wong said he worries the government may not fully understand how much people love the games they play and rely on it for their livelihood and happiness.

“You would think the government would understand how integral sport is to people’s lives at this point,” he said.