Canada the team to beat as Olympic seedings announced 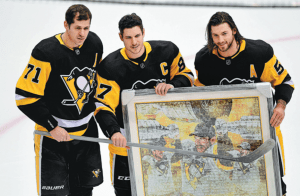 Sidney Crosby (center) of the Pittsburgh Penguins poses with teammates Mike Matheson (right) and Evgeni Malkin to honor Crosby for his 1,000th NHL appearance prior to their home game against the New York Islanders on Saturday. Crosby is expected to star for Team Canada at the Beijing 2022 Winter Olympics.

The International Ice Hockey Federation has announced its seedings for the 22 teams slated to play at the 2022 Beijing Olympics, and as expected Canada is ranked No 1 in the men’s tournament and No 2 in the women’s.

The men’s tournament will use the same format as the four previous Winter Olympics, with 12 teams split into three groups of four.

The qualifiers will be determined in the final pre-Olympic tournament, scheduled for Aug 26-29 in Latvia, Norway and Slovakia.

The women’s tournament at Beijing 2022 will be contested by a record 10 teams, in two tiered groups of five. The top five according to the 2020 IIHF world rankings－the US, Canada, Finland, Russia and Switzerland－will play in Group A, while Japan (6) will head Group B, along with three qualifiers from the final pre-Olympic tournament in November (seeds 7-9) and China (10). The top three finishers in Group B will compete in the playoff round.

With the exception of host China and perhaps one qualifier, all the men’s teams will include players from the National Hockey League.

The NHL did not allow its players to participate in the 2018 Pyeongchang Olympics, and the fact that Crosby, who will be 34 when the puck drops in Beijing, is probably the only member of the 2010 and 2014 gold-medal teams assured of a return trip in 2022, bears out general manager Doug Armstrong’s pledge that “youth will be served, for sure”.

“The NHL is a quick league right now and I think that we have the players that can play the 200-foot (61-meter) game. We want to be a fast and difficult team to play against.”

Canada dominated the 2014 Sochi Games with a suffocating defensive performance on the larger international-size ice surface, but high-octane offense will be paramount on Beijing’s NHL-sized rink, led by players like McDavid, MacKinnon and Auston Matthews of the US, each of whom helped light up the 2016 World Cup as members of the 23-and-under Team North America.

“I think that the World Cup showed the excitement and the flair that Young Guns team put on the ice,” said Armstrong. “This group that we’re going to assemble is probably going to have a lot of faces that have never worn the Canadian jersey at this level of competition. It’s going to be fun.”

Meanwhile, the recent appointment of Harbin native Yu Baiwei as a playing assistant coach bodes well for China’s hopes of advancing out of Group B and possibly making the podium in the 2022 women’s tournament.

Yu, 32, is the highest-scoring defender in the history of the Chinese national team. She competed in the 2010 Olympics in Vancouver, where she was one of just three defenders on Team China to earn a point. She’s a veteran of a dozen IIHF tournaments and was named China’s top player at the 2014, 2017 and 2019 Division 1 Group B world championships.

“In 2007, I was a young rookie,” Yu said in an interview with iihf.com. “Now I’m the oldest person on the team and am also working as an assistant coach.

“I’m appreciating more every single day I am training with this team. I want my athletes to figure out what their strengths and weaknesses are. Furthermore, I want to provide more individual thinking for my athletes as well. I am willing to let them explore their talent and potential within ice hockey. Most importantly, to enjoy the game and enjoy life.”