IIHF working to postpone women’s world hockey championship to May 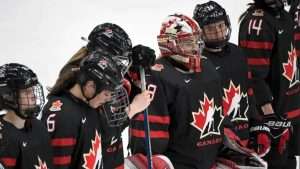 The women’s world hockey championship is scheduled for April 7-17 in Halifax and Truro, N.S., replacing the 2020 tournament that was cancelled due to the pandemic

The Canadian women’s hockey team opened a camp in Halifax on Monday wondering if and when there will be a world championship there.

Nova Scotia’s government has yet to approve the world championship April 7-17 in Halifax and Truro, and the International Hockey Federation wants to postpone it until May.

“We are working now on a postponement,” IIHF president Rene Fasel told The Associated Press on Monday.

“We saw it last year with the virus as soon as the weather was warmer, maybe the restrictions will be different.”

Halifax and Truro were co-hosts of the 10-country 2020 women’s championship cancelled because of the COVID-19 pandemic.

The 35 Canadian players arriving Monday in Halifax are preparing as though they’ll compete for a world title in May.

“I think we had an inclination it would get pushed at some point,” Hockey Canada’s director of national teams Gina Kingsbury told The Canadian Press from Halifax.

“We’re moving ahead like worlds are happening in that time frame.”

Kingsbury views a postponement as an indicator both Hockey Canada and IIHF are committed to making the tournament happen, instead of cancelling a second time.

“I really do feel the postponement is to make sure it happens … and to make sure we’re in a good position to be able to host and to do so in a safe manner,” she said.

“There’s definitely a process in place and I think Hockey Canada is going through the right process step by step to ensure we will have a world championship in May.”

Canada requiring travellers arriving from outside the country to isolate for 14 days is problematic in hosting international sport.

Hockey Canada obtained federal government permission to alter that restriction for December’s spectator-free world men’s junior championship in Edmonton, where players and personnel were walled off from the public in a secured zone and underwent regular testing for the virus.

Nova Scotia presents another layer of restriction requiring people arriving from outside the province to isolate for 14 days, which isn’t the case in Alberta.

“The players and staff will be maintaining a quarantine between the hotel and rink and will have no contact with anyone outside of their ‘camp bubble”‘, Nova Scotia Health said Monday in a statement.

25-person limit on ice at camp

All players self-isolated for seven days and were tested before arrival in Halifax, Kingsbury said.

She says she could throw a baseball from the team’s hotel and hit Scotiabank Centre across the street, but the players travel by bus to the arena so they don’t mix with the public.

Nova Scotia limited the number of people who can be on the ice at one time to 25 last Friday, so the women’s camp format had to be quickly adjusted, Kingsbury said.

“Being here is a good thing in a lot of ways,” Kingsbury said. “It’s always good to get a sense and a feel of where you’re going to compete. We’re going to be skating on the same ice as worlds.

“Any time you can mimic your biggest competition is a huge advantage I would say in your preparation.”

Since Canada finished third in the 2019 world championship in Espoo, Finland, the team has played five international games against the United States.