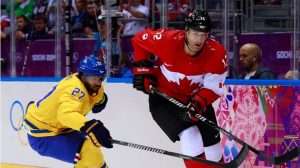 It is the last of the old, great records, and it is gone. Patrick Marleau, from tiny Aneroid, Saskatchewan, has now played more regular-season games in the NHL than any other of the nearly 8,100 players who have skated in the league between 1917 and today.

Marleau played in his 1,768th game Monday night at T-Mobile Arena in Las Vegas while playing for the San Jose Sharks, the team with which he has played more than any other. The 41-year-old surpasses Gordie Howe, from the equally tiny Floral, Saskatchewan, who played 26 seasons in the NHL before retiring at age 52 in 1980, his fifth decade of play.

“It was definitely a long ride,” Marleau said after the record-breaking game. “I’m very grateful and blessed that I was able to do this with all the support I’ve had over my career. It’s something I’ll never forget… It was a really special night. You don’t have these nights without teammates, without great organizations. Definitely have those covered for sure.”

Howe’s record was one of the longest lasting in league history, having survived more than 41 years. In third place is Mark Messier, who played in 1,756 games before retiring in 2005 prior to the start of the new season and after missing all of 2004/05 because of the lockout.

Marleau is not the oldest player in the league today. That distinction goes to Slovak defenceman Zdeno Chara, who is 43 and who was drafted in 1996. Marleau was selected 2nd overall in 1997, one behind Joe Thornton, who is the second oldest player this season at 41 for the Maple Leafs.

But what separates Marleau from everyone else is not only his longevity but his consistent resilience. As of now, he has an Iron Man Streak of 894 consecutive games, the 4th-longest in NHL history. He last missed a game on 7 April 2009.

When Howe retired, he led the league in career goals, assists, points, and games played. Wayne Gretzky wiped out the first three, and now Marleau has taken care of the last. But one record that no one has come close to breaking is Howe’s record of 22 straight seasons of 20 goals or more. Ron Francis had 20, and three players had 19 – Brendan Shanahan, Jaromir Jagr, and Dave Andreychuk.

“I think dad would be very thrilled and the first one out on the ice to applaud Patrick on this really incredible milestone,” Murray Howe, one of Gordie’s four sons, said of Marleau’s achievement.

Marleau had surpassed the hallowed 500-goal and 1,000-point marks earlier in his career, but his other greatest claim to fame is a record he doesn’t want to own. He has played more games in the regular season and playoffs than anyone else without winning the Stanley Cup. He has played parts of 21 seasons with the Sharks over three stints, but in two years with Toronto he never came close and at the end of the 2019/20 season, after a trade to Pittsburgh, he lost in the first round. In all, he has played in 20 playoff seasons and 195 games, coming closest to the Cup in 2016 when San Jose advanced to the finals, only to lose to Sidney Crosby and the Penguins in six games.

Marleau may not have won the Cup, but his international career with Team Canada has few equals in the modern game. He won Olympic gold in both 2010 and 2014, playing alongside Crosby, and he also won gold at the 2003 IIHF Ice Hockey World Championship and silver two years later.

Marleau’s durability in a high-paced and physical league have set him apart from the rest. Although he has never won an individual league trophy, he is respected league-wide for his sportsmanship and dedication, his love of the game and his leadership in the dressing room.

Marleau has scored 25 goals or more in a season 13 times, peaking in 2009/10 when he had 44. In 2005/06, he had 86 points, the most of his career. He has always been known as a balanced player, one who can score and pass and create offence in many ways. He leads the Sharks in virtually every significant statistical category, and no doubt when he retires his number 12 will be raised to the rafters of the SAP Center.

Above all, his games played record is one born of passion.

“I just love it,” Marleau said about playing hockey every night, every year. “There’s nothing else like it.”

And for the record, the Knights won the game, 3-2, in a shootout. Marleau took the first shootout shot for the Sharks but was stopped by goalie Robin Lehner.