Gettin’ their kicks with sticks 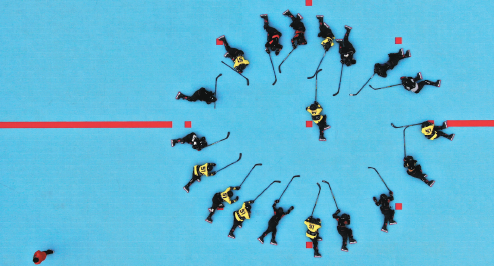 The hardy students at Shaolin Tagou Martial Arts School in Dengfeng, Henan province have been honing their hockey skills since 2019. Combined with their kungfu training and academic studies, the kids practice roller hockey on a daily basis, with plans afoot to introduce them to action on the ice.

As a novice of the sport, China’s ice hockey talent pool is still relatively thin. However, with the 2022 Beijing Winter Olympics around the corner and the country’s ice and snow sports industry on the rise, more and more youngsters are picking up sticks to enjoy one of the world’s toughest team sports.

Among the unlikeliest of newcomers to the sport are students at Shaolin Tagou Martial Arts School in Dengfeng, Henan province. In 2019, around 1,000 students signed up for the school’s newly formed hockey club. Ranging in age from 6 to 15 years old, the club encompasses seven squads in total.

But with no ice to practice on, players perfect their skills on roller skates, making for a diverse daily routine of academic studies, kungfu lessons and roller hockey.

“All the students have been through tough kungfu training since they were little kids. They have great physical strength, coordination and flexibility compared with everyday school kids,” Zhang Shanghang, the school’s ice hockey youth training director told Xinhua.

“They are perfect for the sport. Some of them can learn how to skate with all the equipment in just three days. And now we are planning to let them move on to the next step of training－on ice.”

Pulling on a Team China jersey to represent their nation at the Winter Olympics is the ultimate dream for all the youngsters.

“My favorite player now is Zuo Tianyou of the Beijing College of Sports team. He has great dribbling skills,” said Huang Yuxuan, who watches ice hockey in his dormitory after training.

According to the International Ice Hockey Federation, China now has 537 male and 822 female ice hockey players, along with 8,147 juniors. The numbers are still low compared with the sport’s traditional powerhouses. Canada and the United States, for example, boast hockey populations of over 600,000 and 550,000 respectively.

Attracting more people onto the ice and developing the sport from grassroots level are seen as key to the sport’s future in China.

“We should fully take advantage of the Beijing Winter Olympics and facilitate the growth of Chinese ice hockey,” Hu Jiang, the coach of the Qiqihaer city ice hockey team in Heilongjiang province, told Chinanews.com in March.

“Compared with the ice hockey powerhouses of the world, China’s ice hockey development is still at a very early stage, and there is huge room for improvement,” Hu added.

“Building a professional league and developing the sport in schools and universities are vital for the sport’s development in China.

“We should attract more people to participate in the sport and the winter sports sector in general. We should let it grow from grassroots level to lay a solid foundation. We should also promote ice hockey culture among sports lovers.”