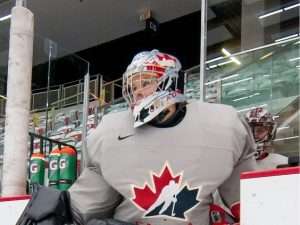 Manitoba-raised goalie Kristen Campbell hits the ice for a training-camp session with Hockey Canada in January 2021. Campbell is among the stars of the PWHPA’s Secret Dream Gap Tour stop in Calgary

Kristen Campbell always dreamed of being part of Canada’s defence.

Just not necessarily the last line of defence.

“When I was a little girl, I started out on the blue-line,” Campbell said. “I actually idolized Cassie Campbell. I wore No. 77 because of her, and I’d always watch all the national-team games.

“And then I ended up switching to goalie. My brother was a forward, so he threw me in the net. And once he threw me in, I basically never came out.”

That way-back-when switch from the blue-line to the blue paint proved to be a wise move for Campbell, who is emerging as one of the best in her business.

In fact, the 23-year-old — a proud member of the Professional Women’s Hockey Players Association (PWHPA) — was thrilled to learn earlier this month that she will be one of the three goaltenders on Canada’s centralized roster for the upcoming season, the short-listed candidates to represent the country at the 2022 Winter Olympics in Beijing.

“It’s an honour to be named to that roster and it’s a goal of mine that I’ve had now for my entire life,” Campbell said. “It’s something I’ve been craving — to get into that competitive, high-performance environment of centralization. I think the news has started to kind of set in now, and I can’t wait to get things going with that group.”

Originally from Brandon, Man., Campbell has been playing the waiting game again this week with the stars of the PWHPA gathered in Calgary for a Secret Dream Gap Tour stop.

She tends twine for Team Scotiabank but because the locals have such a crowded crease, she’s yet to be tabbed for a start. That should change in Friday’s clash at the Saddledome against Team Bauer, still perched atop the standings despite Thursday’s 4-3 loss to Team Sonnet.

That means Campbell will be staring down a dynamic cast that is led by the likes of Marie-Philip Poulin and Laura Stacey.

It’s been a tough go for Team Scotiabank, on the wrong end of two lopsided losses so far at this three-team showcase, although that shouldn’t come as a major surprise since the Calgary-based training group hasn’t been able to practise in several months due to public health measures. They’re playing games and playing catch-up at the same time.

Although Campbell moved to the city last summer, determining after a standout collegiate career with the University of Wisconsin Badgers that it would be ideal to be close to Hockey Canada’s resources and training facilities, she admitted during pre-tournament quarantine that she still hadn’t met a lot of her Scotiabank sidekicks.

“I want to be in that team environment again, just get to know people better,” she said. “And then when I do get a chance to play, give my team the best chance to win. That’s my goal.”

For Campbell, the prep work certainly hasn’t stopped because practice time has been so scarce during the pandemic. She has been able to knock off some of the rust at Hockey Canada camps, including try-outs for a world championship that was postponed on startlingly short notice.

“There are a lot of little things that I do on a daily basis to keep myself ready. It all starts with what you do as a part of your routine,” Campbell explained. “I do a lot of visualization and a lot of vision training off the ice, just things that are going to keep me ready for whenever the puck does drop for a game. And I’ve been able to get a sprinkle of action this year with the camps. So just getting back in those (scrimmages), it doesn’t feel like it’s been a year since I’d actually played a game due to the prep that you do off the ice.

“I’ve worked with a sports psychologist now for five or six years and we do a lot of visualization even for practice. So even though you’re not getting the game reps in, it’s making sure that you’re making the most of those practice sessions so that you can trust you’ve fully put in all the work when you do get to the games. Just visualizing certain things that I want to work on, even if I don’t get to be on the ice — like sitting there and going through those drills and those reps in my head. And then obviously there’s visualization for games, so going through different situations that will come at you and visualizing the environment that you’ll be in and trying to make it as clear as you can, even without being in that exact moment.”

Back when it was more daydreaming than a mental training exercise, Campbell had visions of being a defensive stalwart for Team Canada.

She could, come February in Beijing, be standing in the crease instead.

“People are always like, ‘Oh, why would you want to be a goalie?’ I’ve heard that so many times,” she said with a chuckle. “But I just love the pressure, honestly. And you get used to it, too. It’s not even pressure anymore. It’s just fun.”