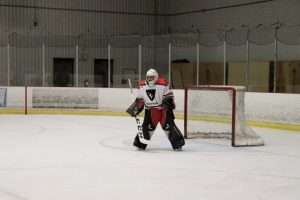 Still sporting a set of Ravens goalie pads, Allie Lehmann hoisted a championship trophy in an empty Switzerland arena. She had just completed back-to-back shutouts in the finals to win the Swiss Women’s Ice Hockey Championship.

The former Carleton women’s hockey goaltender played two years as a Raven before turning pro in the summer of 2020. In August of that year, Lehmann travelled from her home in northern British Columbia to Lugano, Switzerland, where she joined the HC Ladies Lugano of the Swiss National Women’s League.

Even though Lehmann has Swiss citizenship, playing professionally in Europe brought a set of new experiences and challenges that many would find daunting.

Adapting on and off the ice

For Lehmann, the first challenge was the language barrier. Over 80 per cent of Switzerland speaks either German or French, but in Lugano—which sits on Switzerland’s southern border with Italy—most people speak Italian. This included most of Lehmann’s new teammates and coaches.

“The first few meetings with the team were very different,” she said. Lehmann added as she got to know her teammates, she realized many could speak other languages.

“It took me a while to figure out who spoke English, but thankfully several teammates could translate when the coach spoke to the team or drew up plays and drills,” Lehmann said.

The second challenge was adapting to the European game of hockey. Not only does the style of play differ from North American hockey, but European hockey rinks are 15 feet wider. This changes the pace of the game and, crucially, a goalie’s perspective on the ice.

European hockey is more possession-based; players hold onto the puck and pass for long periods of time before shooting. On the contrary, North American hockey is focused on taking as many shots as possible. As a goalie, Lehmann saw this change as an exercise in patience.

“One of my teammates called them social passes, as if the forwards had to pass the puck around a hundred times to say hi to their linemates,” Lehmann said. “There were a few times where a player would have a wide-open net, but choose to make another pass.”

Andrea Odermatt, a forward on last year’s Lugano team with Lehmann, described Lehmann as a motivational presence on and off the ice.

“The team trusted [Lehmann] in the net … What stood out the most is her understanding and implementation of goalie techniques in practice that reflected in the games,” Odermatt said.

Odermatt, who has played hockey in leagues across three continents, applauded Lehmann’s ability to make an impact despite the adversity of moving across the world.

The challenges weren’t any detriment to her play. Lehmann started the season off hot, debuting in Lugano’s second game with a 3-0 shutout win over Neuchâtel. Through the regular season, she split playing time with goalie partner Giulia Mazzocchi. Lehmann played nine games with three shutouts and a 1.34 Goals Against Average (GAA)—placing her second overall in the league. 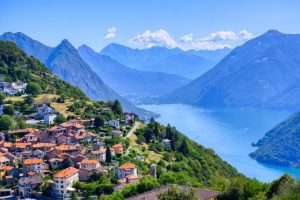 Lugano is located in southern Switzerland

As the season progressed, Lehmann had to focus on more than just hockey: she was balancing the online course load of a third-year neuroscience student at Carleton. With evening practices and games on the weekend, Lehmann also took time to focus on herself.

“Surprisingly, it wasn’t as hard to manage my time between hockey and school compared to when I was a student athlete [at Carleton],” Lehmann said. “We had a few practices late in the evening to accommodate players’ work schedules. I found I had a lot more free time.”

The hard work paid off

HC Ladies Lugano entered the postseason as the second overall seed, and because of her regular season performance, Lehmann was the sole starting goalie for the playoffs.

The semi-finals were a hard-fought battle against Thurgau, which followed Lugano closely in the standings all season. Thurgau’s top scorers, Phoebe Staenz and Simona Studentova, put on an offensive show but with key saves from Lehmann and an offensive push from Lugano, the team squeaked by in four games. 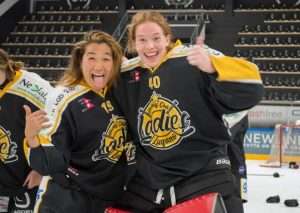 In the finals, Lugano opposed their league rivals, the number-one seeded Zurich Lions. Unlike the offensive spectacle of the previous round, this matchup was set to be low-scoring. Zurich was a defensively-strong team, backed by French goaltender Caroline Baldin, the backbone of Zurich’s success. But at the other end stood Lehmann and a powerful Lugano offense led by Michelle Karvinen, who scored at a goal-per-game pace in the regular season.

Zurich and Lugano split the first two games in the five-game series. In game three, Lehmann and Lugano took a dominant 2-0 lead in the second period and withstood eight minutes of penalties in the third period to complete the shutout. Lugano took a 2-1 series lead.

After the game, Lehmann said she focused only on the next game and not what would happen if Lugano won.

“I tried really hard not to think about the possibility of winning a championship,” Lehmann said. After a nearly three-hour drive home from Zurich, she said her focus was on resting.

Starting game four, Lehmann said she was mindful of what she had worked on through the season with sports psychologist and Carleton hockey mental performance consultant Chantale Lussier.

“Together, we altered my approach to playing big games and acknowledging the emotional side of the game,” Lehmann said. “If I focused on staying present and competing, then the performance would take care of itself.”

Throughout the first two periods, Lehmann said she focused on each shift and play, allowing her nerves to fuel her performance.

With Zurich goaltender Baldin at one end of the ice and Lehmann at the other, the game remained tied through the first two periods. It wasn’t until eight minutes left in the third period that Lugano’s Karvinen scored to give the team a narrow edge.

“After we scored, I felt the most calm. I kept my focus … and tried not to watch the clock,” Lehmann said.

Despite Zurich’s best efforts in the final minutes, Lehmann kept her cool in net and the HC Ladies Lugano won the Swiss Women’s Championship. 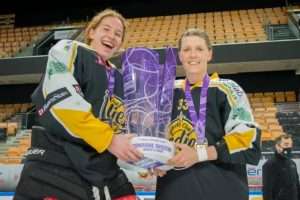 The season ended with little pomp and circumstance. The team lifted the championship trophy in an empty arena and received their medals without any handshakes. After weeks of COVID-19 tests and quarantine, Lehmann returned home to British Columbia, just in time for spring chores at her family farm.

Next year, Lehmann said she will return to Switzerland for another season in net and hopes to also train with the Swiss national team for a shot at playing in international tournaments.