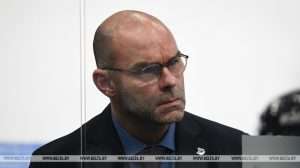 The Belarusian national ice hockey team will be trained for the Olympic qualification by a new coaching staff led by Craig Woodcroft, BelTA learned from the website of the Belarusian Ice Hockey Federation.

The decision was taken at the meeting of the Executive Committee of the Belarusian Ice Hockey Federation on 7 June.

Earlier, Mikhail Zakharov left the position of the head coach of the national team.

On 26-29 August, Belarusians will compete for the only Olympic berth against Slovakia, Austria and Poland. Bratislava will host the Group D qualification tournament.

Craig Woodcroft has recently extended his contract with HC Dinamo Minsk. Next season will be Woodcroft’s fourth behind Bisons’ bench.

Craig Woodcroft previously worked with the Belarusian national team at three editions of the IIHF World Championship (2015, 2016, 2017) and Olympic qualification for the 2018 Games, where he assisted Dave Lewis. In the 2017/18 season, he was part of Team Canada that won the 2017 Spengler Cup and a bronze medal at the 2018 Olympics.