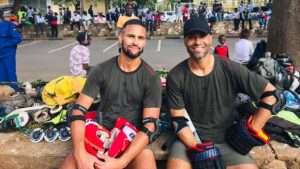 On the same weekend the second round of the Stanley Cup playoffs was being played in North America, a different hockey game featuring NHL talent was taking place in a large parking lot on the streets of Nairobi, Kenya.

Twenty-four-year-old Calgary Flames defenceman Oliver Kylington and 39-year-old Johnny Oduya, who played 850 games in the NHL from 2006-18, were in the East African country playing roller hockey with locals and the Kenya Ice Lions, the nation’s only team playing organized hockey.

The pair of defencemen also donated equipment through sponsors, visited neighbourhoods and met with locals.

To plan the weekend, Kylington and Oduya collaborated with the Ice Lions, who play in a country that has just one ice hockey rink. It’s located in a hotel but has been shut down for more than a year due to the COVID-19 pandemic.

Comprised of mainly adult males, the Ice Lions compete in intrasquad games and bring in guest players to participate as well.

“We brought these plastic pucks and they were shooting and guys were going down, blocking shots with no equipment,” Kylington said from Nairobi. “I would never see a Swedish kid do that. We’re like, ‘What is going on here?’”

“It’s almost like watching a Stanley Cup Final,” said Oduya, who was born in Stockholm and won Stanley Cups with the Chicago Blackhawks in 2013 and 2015.

“They’re playing on the street on a Sunday for three hours. It’s fascinating.’” 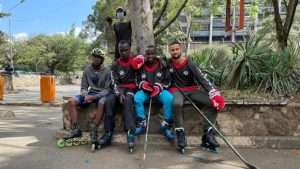 Kylington and Oduya have known each other since Kylington’s father introduced them when he was around eight years old. Oduya became a big brother to Kylington, someone with many shared experiences as a fellow hockey-playing Swede with African heritage. Kylington’s mother is from the Eastern African country of Eritrea, while Oduya’s father is from the Luo tribe of Kenya.

After meeting, they’ve gone on to train and vacation together over the years. Now, they are trying to grow the sport together on the continent of their ancestors.

“It’s been mind-blowing meeting people and seeing that passion for hockey in their eyes,” Kylington said.

This was the first time he’d been to Africa since he was 10.

“It’s been really humbling to see where the kids playing here have grown up,” he said. “You get a lot of perspective. You realize quickly not to take things for granted.”

“So, like the action of the lion,” Oduya said, “I wanted to tie it in and try to open up quite a segregated game, which hockey is.”

Now, the NHLers are coming to them.

“They put on a huge show,” Ice Lions coach Tim Colby, a Canadian diplomat, said. “They brought tons of gear and jerseys. Things like that are really inspiring for the team.”

He was also impressed with how Oduya and Kylington genuinely wanted to learn about the country’s life and culture. Kylington did much of the legwork in terms of arranging donations and organizing logistics.

“Oliver asked tons of questions about life here,” Colby said. “Neither of them wanted to leave.”

Colby has witnessed firsthand the power of hockey in shaping lives and the influence of having the likes of Kylington and Oduya involved in developing the sport in Kenya. It allows participants to dream big, not just in sports but also in other areas of their lives.

“The players just see the world differently when they start playing,” he said. “The world now is no longer just Nairobi. It’s not where they live. All of a sudden, they have a chance to go somewhere internationally…at least you have the opportunity to think that way now.”

Chances are Kylington, Oduya and Colby will find themselves together on that same parking lot in Nairobi for puck drop again in the near future.

While their first voyage to Kenya was short, Oduya and Kylington plan to return in a year to bring even more gear, play more games, and further integrate into the culture.

Their ultimate goal is to introduce Africans to hockey, both for exercise and as a tool for social mobility.

“It’s a way for them to come to the rink, stay out of trouble, and do positive things,” Oduya said.

For both of them, it has meant even more than that.

“I would say it’s been the best trip of my life so far,” Kylington said.

“I’m taking a lot with me. It’s been amazing. It’s so hard to put into words. For me as a grown-up now, coming back to Africa, you understand more about stuff in life. You’re seeing what people really fight for and how hockey can bring joy to them. It’s amazing and unbelievable to see that passion…just them loving the game.”

“You get touched emotionally in a different way when you’re there,” Oduya said. “In some ways it’s challenging to visit, but there’s so much enthusiasm from them. The kids we met have the mindset of possibility.”