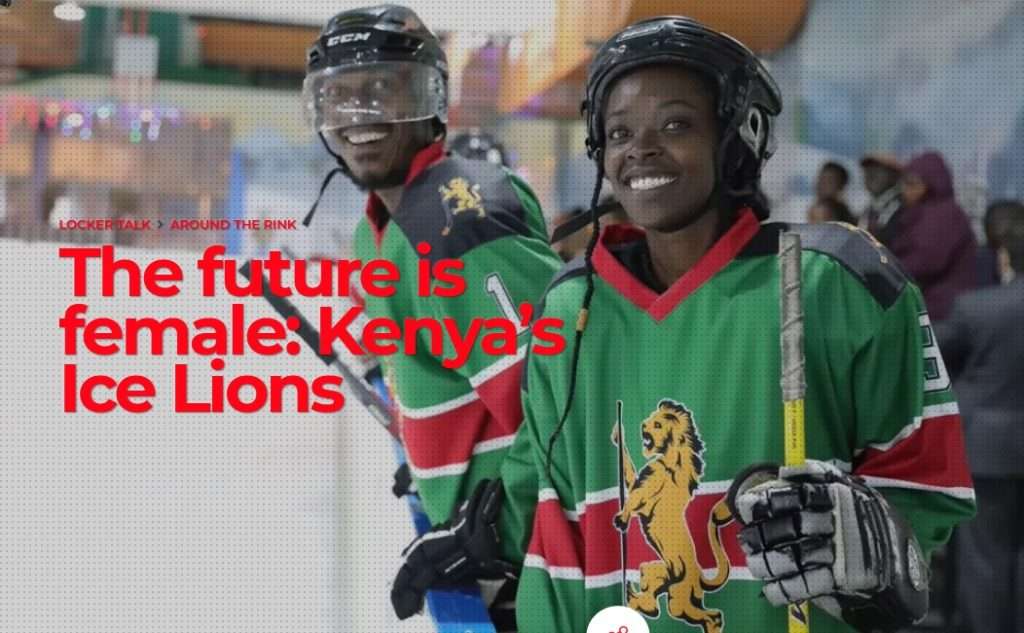 If you were to stop by the Solar Ice Rink in Nairobi’s Panari Sky Centre on a Wednesday night or Saturday morning—pre-COVID-19, that is—you’d come across the Kenya Ice Lions playing three-on-three shinny on the small, 32 by 12 metre ice surface.

Amongst the players you’d probably spot Faith Sihoho, who is currently the only adult Kenyan female engaged in the sport.

“She was one of three women players who turned up fairly regularly,” Canadian Tim Colby, who has been helping the Kenya Federation of Ice Sports (KEFIS) build their hockey program, said of first meeting Sihoho when she picked up the sport in 2017. “They stood out not just because they were the only women, but because of their determination. We didn’t have much equipment back then and you came out with more than a few bruises and cuts, but none of these women backed down despite the fact they were just starting to learn the game.”

While Sihoho enjoyed roller skating, she didn’t know ice hockey was played in Nairobi—at least, not until one of her friends invited her out to watch.

“The first [time] I sat on the bench and I watched, the second time the same,” said Sihoho. “Then one day […] our captain, he just gave me the skates and told me to get in. It was my first time using even the hockey stick and everything, but slowly, slowly I learned.”

Now Sihoho is a key member of the Ice Lions, playing and coaching in addition to lending her accounting knowledge and experience as an assistant financial manager for KEFIS. She is extremely dedicated to the team, even building a career for herself (her own business selling organic self-care products) that gives her the flexibility she needs to attend ice times.

“Faith brings a lot to the team,” said Colby. “She’s tough, she doesn’t complain, and she’s come a long way learning the game, and this gets noticed. It not only earns her respect, but it demonstrates to others the relationship between hard work and success and to never give up.”

The story of the Ice Lions has been well documented, with the team receiving heightened media attention in 2018, including a video feature produced by Tim Hortons and an ESPN article focused on the team’s female players. Since then, the Ice Lions have experienced a series of ups and downs. While they found opportunities to face new competition through tournaments organized by groups such as the Howe International Friendship League, they’ve also seen their rink—the first to be built in East and Central Africa—close indefinitely due to local pandemic restrictions and lockdowns.

When and how the ice surface will be available again is unknown. However, that doesn’t mean that the Ice Lions have been inactive. On the contrary—despite not having access to ice for over a year, the team has been hard at work and focused on the future, which looks particularly bright for Kenya’s young female players.

Having enough women playing to be able to form a female hockey team is still one of their goals. The number of Kenyan women playing has fluctuated over the last few years, but KEFIS has upwards of 16 girls in their youth program.

“We hope the upcoming ones, we have so many, the young girls, so we hope they will stick to hockey,” said Sihoho. “It’s challenging to get females to play here [… ]but people are trying to change, people are trying to be accepting of women in sports[…]for us grown-ups over 20, we just hope the [younger players] will get support in playing.”

“We have a very small ice rink, but the youth sessions were getting so popular we had to split the ice into two halves for practices, and there were a lot of young girls coming out,” said Colby. “You can really see immense progress with the girls. I work them pretty hard and they pick things up fast—much faster than when I coached kids back home [in Canada].”

With on-ice sessions not currently possible, Colby, Sihoho, and the Ice Lions have been getting creative with inline and ball hockey outreach.

“The Ice Lions are very generous and support some children homes and play ball hockey with them, raise funds, and we’ll get these kids skating when the ice is back,” said Colby. “Many Ice Lions come from an inline roller hockey background so we’re organizing tournaments for this and engaging with inline players to get them interested in ice hockey.”

In addition, steps are being taken to join the IIHF, gear inventory is in progress, and yearly budget plans are being developed. The team is also working with the Hungarian Embassy in Kenya to organize off-ice skills development sessions with a Hungarian coach, and they’ve continued to engage with their community and fans through social media and their GoFundMe campaign.

For Sihoho, sharing her love for hockey with others, particularly young up-and-coming female players, has made the challenges of the last year worth it.

“Personally for me, ice hockey has made me become more disciplined, and I have been able to accomplish so much in that,” said Sihoho. “It forces you to work hard […]there’s just something, a renewed energy, and you feel like you want to keep on doing it.”