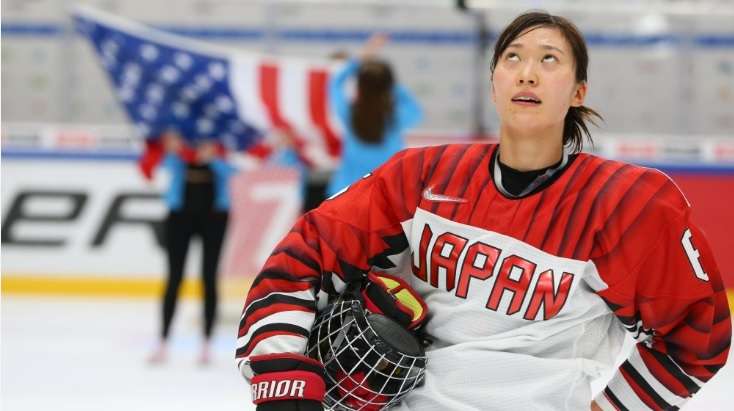 Japan’s women’s ice hockey team is setting the bar high as they prepare for a busy schedule ahead that includes the 2021 IIHF Ice Hockey Women’s World Championship later this month and the Beijing Olympics half a year later in February 2022.

Women’s ice hockey in Japan has made several big strides in recent years and the goal is to keep the momentum going heading into an Olympic year.

Japan made history last January when their women’s team beat defending champion Sweden 4-1 in the final of the 2020 Youth Olympic Games to become the first team from Asia to win a gold medal in an Olympic ice hockey competition.

Just over a year ago, Japan’s women’s team qualified automatically for the 2022 Olympic Winter Games not far from home in neighbouring China by virtue of being ranked sixth in the world.

Now, they’re moving on to the next challenge with the ambitious goal of a top-four finish at the Women’s Worlds in Calgary, Canada.

“In order to contend for a medal in Beijing our goal is to finish in the top four,” Japan coach and former Oji Eagles forward Yuji Iizuka said.

To help them with that goal, the team held three camps in summer in Hachinohe and Tomakomai and a fourth one started on Sunday in Kushiro. In spring among other things, they also played against a male high school team.

“The team wanted an atmosphere that resembles an actual game,” said defender Aoi Shiga, who played for Japan at the 2018 PyeongChang Olympics. “If you are going to compete on the international level you need that intensity to win the one-on-one battles.”

The Beijing women’s tournament has been expanded from eight to ten teams with the world’s top-six teams and host China all earning automatic berths. The remaining three teams will be decided through qualifiers in the upcoming months.

Japan earned berths in the last two Olympics through the qualification tournaments.

They finished last in Group B in Sochi after preliminary-round losses to Sweden, Russia and Germany.

Four years later in PyeongChang, Japan beat host Korea 4-1 after losses to Sweden and Switzerland and then beat Sweden in the placement games to reach sixth place.

Following the wins over Sweden in PyeongChang 2018 and at the Youth Olympic Games in Lausanne 2020 there is a greater sense of optimism that all the hard work is starting to pay off.

While Japan is far from being an ice hockey powerhouse, there is renewed interest in the game with some of their players making strides overseas.

The women’s team has been steadily improving over the years. The Japan Ice Hockey Federation brought in two-time Canadian Olympic gold medalist Carla MacLeod as an assistant coach in 2012 and the team qualified for the Sochi Olympics one year later.

MacLeod is no longer with the team but keeps close tabs on Japan’s women’s hockey and sent a congratulatory note via Twitter when the team won the 2020 Youth Olympics gold.

Japan will go with a largely veteran squad at the upcoming Women’s World Championship. One player they will be counting highly on to help them achieve their goals in Canada is veteran Hanae Kubo.

The 38-year-old forward has played for the national team since 2000 while scoring a total of 37 goals. “I’m looking forward to taking a pass from one of our younger players and scoring,” Kubo said after the recent training camp.

Another veteran to make the squad is goaltender Nana Fujimoto, who won the best goaltender award at the 2015 Women’s Worlds and later that year played in the inaugural season of the National Women’s Hockey League.

The 2021 IIHF Ice Hockey Women’s World Championship is set for 20-31 August in Calgary, Canada. The tournament was rescheduled and relocated after the government of Nova Scotia had cancelled the Women’s Worlds originally planned for spring in Halifax and Truro at short notice with the Japanese team already on the way to the airport.

Japan is in Group B with the Czech Republic, Germany, Denmark and Hungary.
They open the tournament on 21 August against Denmark, then play the Czechs on 23 August followed by Hungary on 24 August and Germany on 26 August.

Iizuka says the expectations will be higher now that Japan has qualified for the Olympics due to its place in the world ranking.

“Compared to Sochi and PyeongChang, the bar has been set higher,” Iizuka said. “The team qualified (for Beijing) not through qualifying but due to our place in the world rankings. We want to raise the level of our game to meet the challenges.”