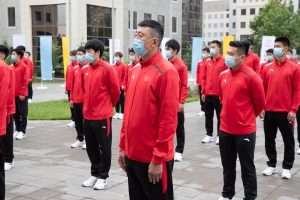 In six months’ time, China’s national ice hockey teams will face the ultimate test against the sport’s heavyweights. But before the puck drops at Beijing 2022, an overseas training program in Russia will help toughen them up for the intimidating challenge that awaits.

With China still but a blip on hockey’s landscape, the host’s 32nd-ranked men’s and 19th-ranked women’s squads face a daunting task on home ice at the Winter Olympics－even if no NHL players are allowed to play at the Games.

After missing out on international action for over a year due to the COVID-19 pandemic, the intensive training and bonding from their Russian adventure will ensure the teams are both physically and mentally ready for Beijing 2022, according to the National Winter Sports Administrative Center.

“The scale of players involved, the length of their overseas stay and the level of competition that awaits have never been experienced before in the history of winter sports development in China,” Ni Huizhong, director of the center, said during a mobilization meeting before the teams departed last week.

“This is a major project in our preparation for the home Winter Olympics. I hope the players can make every day count in Russia to raise their level gradually and be ready to show the world their confidence, progress and team spirit next year in Beijing.”

China’s men’s hockey team has never qualified for the Olympics, but in May 2018 the International Ice Hockey Federation approved automatic berths for the host for Beijing 2022.

A much more competitive force on the global stage, China’s women’s team reached the semifinals at the 1998 Winter Olympics in Nagano, Japan. However, it has failed to qualify for the past two Games, at Sochi 2014 and Pyeongchang 2018, due to stagnant player development.

Even so, the governing body wants the women’s team to target a medal, or at least another semifinal run, at the home Games.

“I think anything can happen in women’s hockey, where the gaps between teams are not as big as on the men’s side,” said Yu Baiwei, the Team China captain who competed at the women’s squad’s last Olympic Games, in 2010.

“Our focus will be quarter after quarter and game after game. Our goal is to execute every 30 seconds as best we can and try to limit our mistakes, and then we will see where we can go from there,” said the 33-year-old forward.

Drawn in Group A alongside world No 1 Canada, superpower the United States and fifth-ranked Germany at the 12-team tournament, the Chinese men’s squad has vowed to show it won’t be a mere punching bag for its three opponents.

“We have to be realistic. For me, the main objective is to gain the world’s respect. That’s a lot,” said Ivan Zanatta, the newly appointed head coach of the men’s team.

Zanatta, a former Italian national team manager and ex-coach of KHL club St. Petersburg SKA, said the Russian league is an ideal platform for his Chinese players to raise their game.

“It’s a huge challenge for China, but it’s a good challenge,” said the 61-year-old.

“I think it’s a great way to progress and step up the level so when we get to the Olympics, it’s not like a shock.

“We will be challenged every night. So the boys mentally and physically are going to be ready for the step to the Olympics … This is the best championship we could possibly play in outside of the NHL.I think we couldn’t ask for anything more as far as where you want to prepare.”

With games coming every two or three nights in the KHL, Zanatta will have to build chemistry between China’s homegrown talents and a group of about 20 North American-born players with Chinese heritage.

Built in China or not, Zanatta is confident all will be fighting as one solid unit when the Games open on Feb 4.

“There’s no special formula, we definitely have to come together and we will,” said Zanatta, who has three sons all playing hockey professionally.

“I will coach them like they are my kids. So I kick him in the ass and pat them on the back. They get both. Stronger than a team, I want to gel them as a family.

“If we’re going to accomplish anything, it will be because of the strength of the wolf pack. Otherwise, it doesn’t work.”