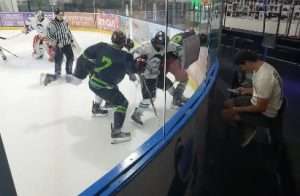 Holon, and pretty much all of Israel, is very hot and humid in the summertime. Those are awful conditions for playing ice hockey. But at the Israel Elite Hockey League, Israel’s premier summer hockey league, it happens anyway.

Walk into Ice Peaks in Holon for a game and you’ll find players with tzitzit flying, skating around, playing against their Israeli peers or even foreign professionals.

“You get the North American experience right here [in Israel],” Jerusalem Capitals captain Itzik Levy said. “They are hard games, especially in this league with guys from North America and Europe. It’s really a fun experience. It’s fast-paced, it’s a smaller rink, so you’re getting to see a lot of action, it’s nonstop movement. I think you’ll get a kick out of it. The level of hockey is actually really high considering the imports and the Israeli mix.”

Unfortunately, the quality of play is far from that of North America’s National Hockey League or Europe and Asia’s Kontinental Hockey League. You just can’t compare Israeli players to NHL stars like Sidney Crosby, Connor McDavid or Alex Ovechkin. As the rink is smaller than NHL rinks, they play four on four (as opposed to the traditional five on five) with modified rules.

But he’s right that it’s a fun experience. The league currently plays all of its games at Ice Peaks, which is akin to a local rink in a small town in North America. Before the league’s playoff games, people were enjoying an open skating session when the rink manager announced that there would be a hockey game right after. Many people stayed and enjoyed it.

There were about 100 people in attendance for the playoff games on June 26. There were parents with their kids, relatives of players, and even adults who stuck around for the spectacle. The small arena got pretty loud after goals.

“It’s very interesting and crazy,” Tal, who was watching his first live hockey game, said. “It’s not the sport I see every day. I think it could be popular, but we don’t see it enough on TV.” He said that if Israeli TV broadcasted the league, he’d watch.

If you know about the league, getting in or watching games is very easy. Tickets were free this season, but might cost as much as NIS 20 next summer. The games are also broadcast live on the Israel National Hockey Society YouTube channel. But there’s not much national publicity about the league.

“I think the greatest message that this league is sending to these guys that are not Israeli or not Jewish is what Israel is really about,” Levy said. “It’s a democracy, it’s free life, it’s being able to live your dream, live your life and go all out. I think we gain big fans of Israel, and I think they’re going to spread the message and hopefully more players will come next year.”

THE CULTURAL osmosis works both ways. For those Israelis who were exposed to the game and were able to crack the IEHL, the league serves as an incredible development tool.

“Bringing in these players from the US, Canada, Germany, France and Russia helps raise the level of the Israeli guys even further,” Brunengraber said. “That, in turn, helps the Israeli national league and helps the national team program by having our summer league serve as an incubator to really help those guys gain experience beyond just skating and stick-handling, but learning how to ‘think’ the game with guys from traditional hockey markets.”

It’s important to note that this league, like the Israel National Hockey Society, functions outside of the jurisdiction of the Ice Hockey Federation of Israel (IHFI), the governing body of ice hockey in Israel. However, some players compete in both the IEHL and the IHFI’s main league, which consists mostly of Israelis.

Israel became a member of the International Ice Hockey Federation, the worldwide governing body of the sport, in 1991. The national team won gold at the Division II Group B World Championships in 2019. They were promoted to Division II Group A, but the last two tournaments were canceled due to COVID-19 restrictions. They still have a long way to climb before reaching the Top Division.

But there is tremendous potential to grow the game in Israel. The country has a sizable population of olim from hockey-loving countries. Those who built connections to teams back home have to wake up in the middle of the night to watch them live. Having a local league could help these olim develop a deeper love of their country.

The Israelis who were at Ice Peaks and experienced the atmosphere of a hockey game firsthand could also support a quality league.

Still, there are plenty of hurdles the league needs to jump to come close to their European or American counterparts. Having the European influence on the team could provide insight into what they could do better.

“The training facilities [could be better], the rink here is good but you have no fixed locker rooms, you have really small ice, the ice quality is nowhere near Germany or Europe, the professionality of the people – they show up five minutes before practice – you’d never see that in Europe,” Fischbacher, who normally plays minor league hockey in Germany, said.

He also said Israel needs to build more rinks, preferably in the Tel Aviv area. Additionally, they need to hire more coaches, get young people on the ice and provide summer training.

“There’s a lot of things to do here, but maybe that’s a good start,” he said. “It’s really important. They have to do it or there’s no future, to be honest.”

The 2021 season ended on July 31 with HC Tel Aviv taking home gold. The Holon Vipers won silver and the Jerusalem Capitals won bronze. The league has multiple sponsorship deals and is already gearing up for the Summer 2022 season.