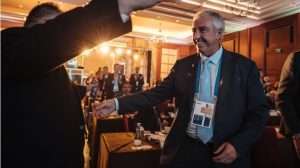 Luc Tardif has been elected as new IIHF President succeeding René Fasel, who held the position for 27 years and didn’t stand for re-election. He won the presidential election in the fourth and last round against Franz Reindl.

Tardif becomes the 14th IIHF President and the second from France after founding President Louis Magnus.

Zsuzsanna Kolbenheyer and Marta Zawadzka were re-elected as female Council members. In the first round for the remaining positions Heikki Hietanen, Anders Larsson, Pavel Bure, Raeto Raffainer and Andrea Gios were elected with a majority with two positions open for a second round. Franz Reindl was elected in the second round and Viesturs Koziols in the third round.

Tardif, who has citizenship of France and Canada, was elected to the IIHF Council in 2012 where he served as Treasurer. He played junior hockey in Canada and professional hockey in Belgium and France where he started his hockey career off the ice with Rouen’s youth program. He was the head of the ice hockey department at the French Ice Sports Federation from 2000 to 2006. In 2006, he was elected as first President of the newly created French Ice Hockey Federation, a position he was re-elected for in 2010, 2014 and 2018. He was also Chef de Mission of the French Olympic delegation at the 2014 and 2018 Olympics. He has worked as member of the IIHF Competition Committee (2008-2012) and as chairman of the IIHF Finance Committee (since 2016).

In his presentation the day before, Tardif underlined the importance of development and bouncing back after the Covid-19 crisis that hit hockey in many countries with a successful restart of the usual activities. He also presented an idea for a larger IIHF Ice Hockey World Championship Division I by merging the two groups, for a “Flying Coaches” program to bring word-class coaches to countries for seminars and wants to further develop 3-on-3 hockey.

He underlined that a President should listen and try to understand the needs of the member national associations. And that’s what he did with individual sessions with almost all member countries during summer. A “Virtual World Tour” or “Co-Construction Process” as he called it during 90 hours.

Bob Nicholson (CAN) was re-elected as Regional Vice-President Americas after Dave Ogrean (USA) had withdrawn. Aivaz Omorkanov (KGZ) was elected as Regional Vice-President Asia & Oceania in a vote against Thomas Wu (HKG), who previously held the position. Among the candidates for Europe & Africa two candidates were remaining with Henrik Bach Nielsen (DEN) winning the vote against Franz Reindl (GER). Presidential candidate Sergej Gontcharov (BLR) withdrew his application as regular Council member and thus leaves the Council.

The election day concluded with the Internal Auditors, Disciplinary Board, Ethics Board and Appeal Board.