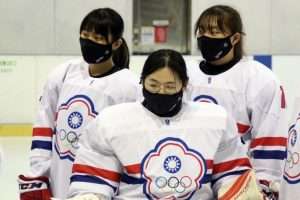 The Taiwanese national ice hockey team will set off on the 27th for Torre Pellice, Italy, to prepare for the second round of the 2022 Beijing Winter Olympic Women’s Ice Hockey Qualifying Tournament, its been more than 2 years, since the team has gone abroad to compete.

The Taiwan team is expected to take a flight to Italy at 5 pm on the 27th and transfer in Amsterdam, Netherlands. A PCR certificate must be submitted before entering the country. After arriving in the country multiple PCR tests will be carried out in accordance with the epidemic prevention regulations of the conference. Private car, point-to-point transfer from the hotel to the training venue.

The last time the Taiwanese ice hockey team participated in the international tournament was the 2019 World Women’s Ice Hockey Championship. Since the global epidemic, the Taiwan team has not played abroad for a long time, and the outbreak of the epidemic in Taiwan in May of this year has greatly affected the team’s preparations.

Head coach Yin Anzhong pointed out that the ice rink was closed in mid-May, and training was suspended for more than two months. During this time, it was not possible to practice on land. The only way to train was to explain physical fitness and tactics online. Training did not resume until August.

Yin Anzhong said that Taiwan’s women’s ice hockey population is small and there were not many people who originally practiced. Before the outbreak of the epidemic, the team would move abroad to train, compete with the Korean national team, and play international invitational tournaments in Thailand, but because of the epidemic we could only stay in Taiwan and practice against the boys in the junior high school group to increase the intensity of training.

Anzhong said that about one-third of the team are younger players, hoping to bring new chemistry to the team, and the team will also take this opportunity to gradually  transition new blood to the team.


Yin Anzhong admitted that now he can only study his opponents through videos, but because it was already a game from two years ago, the recent situation is more difficult to grasp.

Speaking of the goals and expectations of the Winter Olympics Qualifying Tournament, Yin Anzhong said: “Of course I will try my best to win, but I will not criticize the players if we lose. We will treat this as a learning experience, I also look forward to seeing from the players that they will show up against powerful enemies. A fearful spirit, a positive attitude, and even a more active performance than the opponent, to make up for the technical gaps.”