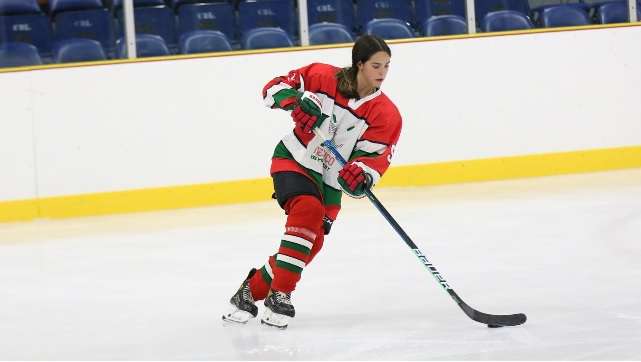 Camryn Heon wants to go from Kraft Hockeyville USA to the medal stand at the 2022 Beijing Olympics for Mexico.

She is a 15-year-old defenseman from El Paso, Texas, and the youngest member of Mexico’s women’s national team vying to compete Feb. 4-20 in China’s capital.

“Since I was little, I knew that I wanted to be in the Olympics,” Camryn said, “and to know that it’s possible for me to play for a country that nobody would have thought has hockey and to represent them, it’s so incredible.”

Mexico, ranked 26th among 42 countries by the International Ice Hockey Federation, heads to Bytom, Poland, this week for an Olympic Pre-Qualification Round from Oct. 7-10. It will play in a bracket with the Netherlands, Poland and Turkey.

Camryn’s quest for the Olympics has been part of the hockey whirlwind swirling in the Heon household recently.

Her father, Corey Heon, is general manager of the El Paso Rhinos junior teams that play at the El Paso County Events Center, where the Dallas Stars defeated the Arizona Coyotes 6-3 in the Kraft Hockeyville USA 2020 preseason game Sunday.

His wife, Lori, who is from Manuel Benavides, Chihuahua, Mexico, shuttled Camryn back and forth across the border and stayed in Mexico for weeks at a time so her daughter could practice and play.

The family had little time to bask in the afterglow of the Hockeyville game. Corey Heon was scheduled to fly from El Paso to Poland on Monday.

“It’s a pretty good accomplishment in what she’s achieved, being a 15-year-old making that women’s national team,” Corey Heon said last week. “We’re really excited as parents and even our organization is super pumped, too. Without their support and their help, she wouldn’t have been able to do it.”

Camryn said she told her parents and grandparents at an early age she would play in the Olympics someday for the United States, Canada or Mexico, with Mexico being her top choice.

She began skating at 3 and started playing organized hockey with boys at 7 because there weren’t enough girls playing in El Paso at the time to form a team.

Once a girls’ hockey program was finally put together, Camryn joined and continued to play on the boys’ squad.

Camryn said she didn’t know about Mexico’s women’s team until 2019 when the country’s men’s national team played two exhibition games against the Rhinos in El Paso.

“I learned they had an 18-U team, so I started playing with them first when I was 13,” she said. “I had been going back and forth to Mexico for (national team) tryouts and last month, I made it.”

Joaquin de la Garma, president of the Mexico Ice Hockey Federation, said Camryn is the second-best defenseman on the team.

“Camryn is so young but she’s one of our best prospects,” he said. “She’s a great skater, she’s very fast skating. She plays good defensive hockey but sometimes she [contributes] in offensive situations. She’s a key player on the team.”

Mexico has been an IIHF member since 1985. Its ice hockey federation ramped up its effort to qualify for the Olympics nine years ago when the country’s minister of sport boosted funding for the women’s program, de la Garma said.

“For Mexico, the best future is women’s hockey,” he said. “Women’s hockey started officially in the Olympics in 1992 (the first tournament was played in 1998 in Nagano). We can say that it’s new for other countries, so it’s very competitive. For men, it’s very complicated because if you want to be in the Olympics you need to at least have some of the team in the NHL. We don’t have any players in the NHL.”

Camryn said Mexico’s women’s team is a talented group of mostly veterans, including Claudia Tellez, a 37-year-old forward who was drafted in the eighth round by Calgary of the Canadian Women’s Hockey League in 2016 and played her way onto the reserve squad.

“The level in competition in Mexico is a lot higher than what I was used to practicing with, because I’m practicing with women,” Camryn said. “I think playing at that level has improved the way I play, the way I skate and everything.”

She hopes her game has improved enough to help Mexico shock the hockey world by earning a berth to play in Beijing.

“People don’t expect the women’s national team to be ranked (26th) in the world,” Camryn said. “I want to take my team to the Olympics, represent my country in the best way I can.”