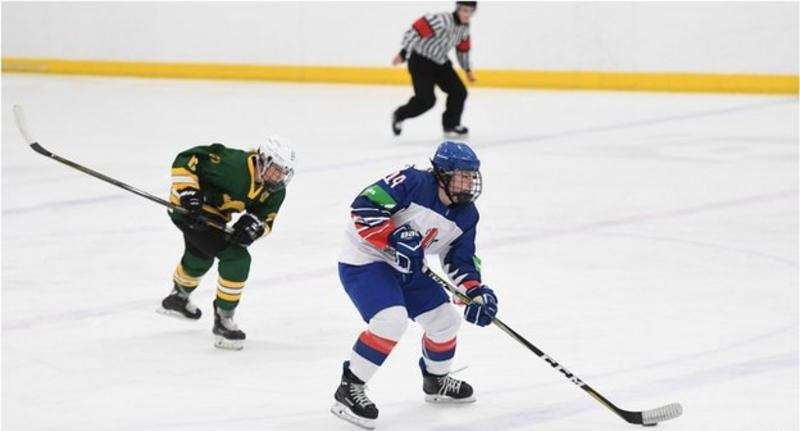 Katie Marsden made her senior GB debut in 2016

What started with a trip to a pantomime on ice at the age of three has taken Katie Marsden all over the world. The next stop, she hopes, is Beijing.

But to go there, she and her team-mates have to achieve what she says would be a “mindblowing” first – to qualify a Great Britain women’s ice hockey team for the Winter Olympic Games.

Because this is not a team of full-time athletes. Most of them have jobs away from the rink – a teacher and a sports therapist, a supermarket team leader and a forensic mental health healthcare worker. Marsden is at medical school, studying to become a doctor.

“It would be so great because it would just show that we do have so much talent in this country,” the 22-year-old told BBC Sport. “It would be great to get that recognition and show that we can play with the best of them.

“It would put women’s hockey on the map in the UK, and hopefully get more people involved from the younger level. That’s what you need to grow a sport.”

Women’s ice hockey has been part of the Winter Olympic programme since 1998, the men’s since 1920. GB has not qualified a men’s team since 1948, 12 years after winning gold.

The GB women’s campaign to qualify for the 2022 Olympics starts on Thursday, when they take on the first round of qualification in Nottingham in a group tournament with South Korea, Slovenia and Iceland.

But it is a journey that started for Marsden so many years before this, on a trip with her grandparents.

She and her brother initially took up figure skating after that panto visit, but Marsden, already a “tomboy” at that pre-school age, quickly ruled it “too girly” and so picked up a stick instead.

Almost 10 years later, the sport took her across the Atlantic where she would remain for some years. Scouted to attend a boarding school in Canada at 13, that led to her later enrolling at Trinity College in Connecticut, United States, where she could combine her hockey with her studies in neuroscience.

Studying and playing Stateside is a move few British ice hockey players have historically made, but a “steady flow” is now heading there as scouts realise “there are British players who are up to the standard of the American talent pool”.

On leaving home so young, Marsden said: “It was very scary but I wouldn’t have changed it for the world.

“I was incredibly shy when I went, but then I came back and people were like, ‘oh, she’s changed, she’s gobby’.

“I wouldn’t have been able to do it without my family. My mum said she had many sleepless nights. She hated it the first few months. It was weird when I came back during Covid because I hadn’t been home for that length of period before, so then to be locked inside together… Mum said ‘I did miss you but this is getting a bit much’.”

Now, aged 22, Marsden is back in the UK permanently, in her second year at Hull York Medical School. She hopes, in the years to come, to become a sports doctor – a dream born out of her interactions with the “whole medical team” as an athlete.

She had initially wanted to be a vet, but that idea was soon quashed when she realised she and animals “don’t get along that well”.

She gets along well with her team though. Marsden has been a critical part of the Great Britain set-up since her debut in 2016, a winner of three World Championship Division II Group A medals.

Next up for Marsden and her GB team-mates are those Olympic qualifiers, taking place from 7 to 10 October.

And they will have home advantage on their side too because the qualifiers – cancelled in 2020 – moved to Nottingham after South Korea withdrew from hosting.

Group victory would send GB into November’s final qualification round, where a ticket to Beijing 2022 would be up for grabs.

“The trip to Korea would have been fantastic but being able to play in front of family and friends, and to get as many people in the rink as possible, it’s just going to add to the experience and hopefully give us that boost to beat everyone.

“We’re confident, it’s a really good buzz, we’ve got a really great team with some nice new young faces, who have brought some really good energy.

“Everyone’s just really excited to get going, because especially with Covid, it’s been quite an anticipated event with it being cancelled last year and us not being able to get on a rink, and now it’s here.”