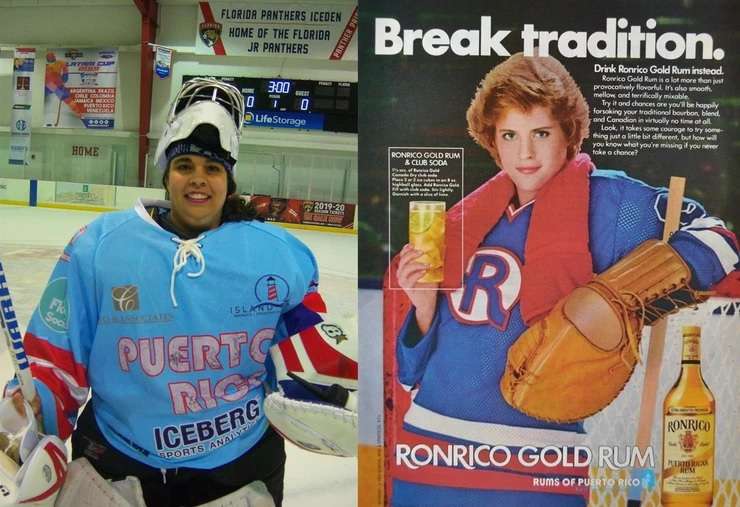 When Sonja Rodríguez saw the 1970s magazine ad for Ronrico Rum featuring a Boricua goalie in front of the net enjoying a cocktail, she knew it was a send up of the times. Women’s hockey, let alone permanent ice on the island, was indeed a dream. The only ice was rattling in the pictured cocktail glass.

Rodríguez is ready to lead “Las Chicas” onto the ice this week at the LATAM (Latin American) Cup in Miami as a serious contender. Puerto Rico is once again making history as the Caribbean’s first ever women’s team. The island men broke through internationally in 2013 at the Copa Invernada in Punta Arenas, Chile.

“I can’t believe this is really happening,” Rodríguez said. “I thought when I played on the men’s team at the 2019 LATAM that was as close as girl’s hockey would get.”

Rodríguez backstopped for Puerto Rico in a four-game win streak to the finals, ultimately won by the Falkland Islands. Puerto Rico was the only co-ed team entered in the tourney, and was a crowd favorite as hockey’s answer to the Bad News Bears.

This is all about to change in Miami with the biggest Latin American hockey tournament yet, featuring teams from Argentina, Brazil, Chile, Colombia, Mexico, Jamaica, Puerto Rico and Venezuela (Ecuador and the Falklands couldn’t make it due to COVID-19 travel issues). The Puerto Rico men have moved up to Division 1 after the “Milagro Sobre Hielo” in 2019, and are no longer an underdog.

“When people heard Puerto Rico was entered in the last tourney, no one knew what to expect. We knew they lost their ice to Hurricane Maria and they were travelling as a pick-up squad — they had talent,” Otero said. “When they ran off dominant wins versus Mexico, Colombia, Argentina and Brazil the secret was out. PR is the real deal. I have no doubt they will be a force in the men’s and women’s brackets this year.”

Every game in this year’s tournament will be aired on HockeyTV. Not to mention that the NHL is sending the Stanley Cup, and pioneer Willie O’Ree — the Jackie Robinson of hockey — will be on hand to showcase the growth of hockey into new regions.

All games will be played at the Ice Den, the practice facility of the Florida Panthers, who, it’s worth mentioning, played the New York Rangers at the Coliseo de PR in 2006. It remains the only NHL game ever played south of Miami.

“When I moved to the island I heard something was going on the hockey front,” he said. “When I see this year’s reality I have to step up my game. Other countries have us circled on the schedule. We’re not a secret anymore.”