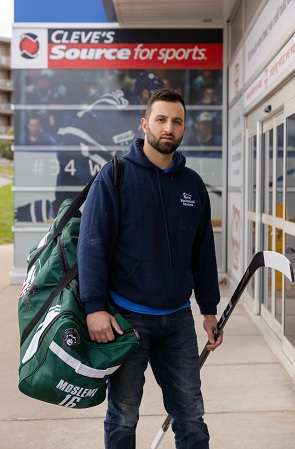 Nadim Muslemi was the lone player from outside Iran to suit up for the national team at the world amateur hockey championship.

Marty Klinkenberg – The Globe and Mail

Nadim Moslemi is a plumber in Halifax. He is also a centre, defenceman and right wing on Iran’s men’s national hockey team. His parents are Iranian but he is a Bluenoser, born and raised in Nova Scotia.

He has never set foot in Iran but that has not prevented him from playing hockey on its behalf. Over the past five years, the journey has taken him to Italy, Japan, Kazakhstan and just last week, the United Arab Emirates.

“I have immense pride in that,” Moslemi, 32, said this week between plumbing repair calls. “I’ll be honest, for me it is like a dream come true. And it’s all a fluke.”

He was the lone player from outside Iran to suit up for the national team at the world amateur hockey championship. Games were contested on the Olympic-sized rink inside the Dubai Mall.

With losses to the Emirates’ national team, a club from Russia and an all-star selects’ squad, the Iranian men failed to reach the playoff round. “That is not a surprise,” Moslemi said.

Skating and hockey were banned and facilities for them were closed down after the 1979 Iranian Revolution. There was not a single regulation-sized rink in the country until the Ice Box opened at the Iran Mall in Tehran two years ago.

At the same time, interest in hockey had begun to grow there from participation in inline skating. In 2016, the first tryout camp for Iran’s men’s national hockey team was staged in Asiago, Italy. Players of Iranian heritage who lived abroad were recruited with the hope of having the squad entered in the 2017 Asian Winter Games in Japan.

Even though he grew up in Canada, Moslemi never played hockey in his youth.

“My parents wouldn’t put me in it,” he said.

He watched games on Hockey Night in Canada and decided to try playing it for the first time at 18.

“That’s a really late age,” Moslemi said. “It took me about eight years to consider myself a good hockey player.”

Moslemi attended tryouts in Italy and a second camp in Kazakhstan and was selected for the Iranian team. He travelled to Sapporo for the Asian Winter Games the following year, but the Iranians were disqualified at the last minute because 13 players, Moslemi included, did not meet residency requirements. One ringer had recently played in the KHL.

“It was kind of disappointing,” Moslemi said. “Most everyone was similar to me: dual citizens with Iranian passports.”

Two years ago, the Iranian national team became a member of the International Ice Hockey Federation. It hopes to play in 2022 at the IIHF Division IV world championship in Kyrgyzstan.

Because he was born in Canada, Moslemi has to apply for a transfer from Hockey Canada to be able to play for another country.

The odds of that not happening are low. It is not as though he has the skills of Mika Zibanejad or anything. The New York Rangers star is of Iranian heritage but was born in Sweden. Hockey Canada is unlikely to stand in his path.

Earlier this month, Moslemi joined other members of the men’s national team in Dubai and skated in the world amateur tournament. More than 1,000 people gazed down at the action from three tiers of the shopping mall.

The Iranian women’s team beat a club from Russia and ended up winning a medal. All of its members were born in Iran.

“It has been a struggle to get where we are over these last six years,” Moslemi said.

For the time being, he is back home in Halifax.

“I’m back to normal life until the next one,” Moslemi said.

He will drop his wrench and don his hockey pads when Iran needs him.

“I know it sounds corny, but when your country comes calling, it is hard to say no,” Moslemi said. “It is kind of a privilege to be part of something this special. I feel fortunate to be able to say that I am a part of history.

“Every time you think you made it, you make it again.”