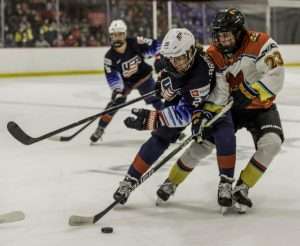 Alex Carpenter, left, of the USA Women’s Hockey team, battles the Ice Wolves’ Blayde Pogreba for the puck during Monday’s game at the Outpost Ice Arenas.

Coming off a recent tight loss to longtime rival Canada two weeks ago, the USA women’s hockey team was eager to get back on the ice.

Plans for a quick turnaround to right the ship were curtailed when an exhibition with Russia was canceled due to a COVID-19 outbreak on the Russian team.

That left the women’s team with an open date, which opened the door for a rare exhibition Monday and Tuesday at Outpost Ice Arenas, home of the New Mexico Ice Wolves.

“Things change all the time, and you have to adapt and adjust,” said USA women’s coach Joel Johnson, who was appointed head coach this summer.

“When you’re playing in a pandemic year, everything is crazy for all of us. We’re just so appreciative of Stan Hubbard (Ice Wolves owner), the Ice Wolves, the town, and the whole community. It’s been an unbelievable experience because we wouldn’t have had an opportunity to play games (this week). It’s a privilege to be here and we’re excited about it.”

Staying on schedule is critical for high-level athletes. Aside from the every-day practices, off-ice training, diet, and conditioning, taking the ice against quality competition is the best test of the Americans’ progress.

“I hope (it’s a competitive game), that’s why we’re here,” said USA team veteran forward, Hilary Knight. “When I’m playing boys, I recall the memories playing against my brothers, and it’s some of the most fun hockey that I’ve played. I’m looking forward to a good night, and to work on things we need to work on going into February.”

The Ice Wolves are coming off a 3-0 win on Sunday, and do not have a scheduled game until Friday’s home date against Wichita Falls. When presented with the opportunity to face the USA team, Ice Wolves head coach Phil Fox said it was an easy decision.

“Stan gave me a call, and he asked if we were willing to have (the USA team) come play our team. I said absolutely,” Fox said. “It’s a pretty unique experience. There aren’t a lot of times the US team is coming to Albuquerque, New Mexico, let alone play our group of guys. We’ve never done anything like that.”

Dillan Bentley, a co-captain for the Ice Wolves, remembered watching the USA team capture gold at 2018. He said he’s never played a competitive game at this level against women, but he does expect he and his teammates will play their own game.

“I’m not sure what to expect,” Bentley said. “They’re the best of the best, and they’re there for a reason. Everyone respects what they’ve been through, and to get where they are in their hockey careers.”

Speaking of new experiences, as well traveled as the USA women’s team is, few have breathed the crisp mountain air of the Land of Enchantment.

“I think there are only two players on our team that have been to the state of New Mexico, so this is definitely a new experience,” said USA team captain, Kendall Coyne-Schofield. “‘It’s an experience we’re embracing, and we’re excited to play the Ice Wolves. We’re thankful they opened their schedule for us because it was last minute, and it’s an opportunity to play against them and be here where we’ve never been before. Hopefully, we’ll inspire some young kids along the way.”

MONDAY GAME RECAP: The Ice Wolves turned back an early third-period rally, scoring three goals to beat the U.S. women’s team 7-3. Team USA trailed 4-1 after two periods, but closed to 4-3 after goals from Alex Carpenter and Britta Curl — the latter with 13:13 remaining.

The Ice Wolves had a 40-27 advantage in shots on goal. … Only two penalties were called, both on the Ice Wolves.