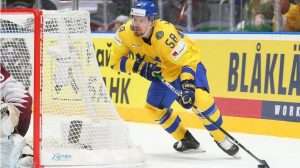 Sweden took the honours in the first stage of this season’s Euro Hockey Tour, defeating Finland in Sunday’s decisive game at the Karjala Tournament in Helsinki. The Tre Kronor enjoyed a perfect weekend at the start of the international campaign, beginning with a 4-1 win over the Czechs in Linkoping before heading to the Finnish capital to beat Russia 4-2 and Finland 3-1.

The game against neighbouring Finland was a winner-take-all clash, with both teams victorious in their opening games. However, Sweden always held a slight advantage and converted that into an opening goal from Anton Lander late in the first period. The middle frame brought two more goals for the visitor, with Jesper Olofsson and Henrik Tommernes on target before Heikki Liedes potted a consolation effort for Suomi in the third.

Earlier on Sunday, Russia defeated the Czech Republic 5-2 to take third place. Once again, the Russians played a youthful roster – 25-year-olds Alexander Yelesin and Danil Vovchenko were the elder statesmen on the team – but unlike last season the Red Machine found it tough against more experienced European opposition.

Sweden’s roster was uncharacteristically light on KHL players this time, with Johann Garpenlov choosing to take a look at his Swiss-based players. The likes of Lander, Tommernes, Olofsson, Niklas Hansson, Mathias Brome and Carl Klingberg all featured in the Karjala Tournament but will be unavailable for December’s Channel 1 Cup due to club commitments. That could open the door for several KHLers to take part in the tournament in Moscow.

That tournament will also feature a Canadian line-up. Russian Hockey Federation vice-president Roman Rotenberg confirmed that Hockey Canada had asked to take part, explaining that Canada wanted to prepare a team of European-based players in case the Covid-19 situation makes it impossible for NHLers to go to the Olympics in February.

While Sweden took the honours in Helsinki, Russia’s 16-year-old star Matvei Michkov wrote plenty of headlines. The SKA St. Petersburg prospect became the youngest ever player to represent Russia or the USSR, making his debut in Thursday’s game against Finland at the tender age of 16 years, 11 months and two days. That smashed the record set by Alexander Ovechkin in 2003 as the youngest skater on a Russian team, and the all-time Russian and Soviet record held by legendary goalie Vladislav Tretyak since 1968. Ovechkin and Tretyak were the only players to represent the Red Machine at the age of 17; Nikita Chibrikov became the third to do so at the weekend.

Meanwhile, Michkov was by no means overawed in that exulted company. In his second appearance, Saturday’s 2-4 loss to Sweden, he became his country’s youngest ever goal scorer – and how! Early in the second period, the teenager collected the puck behind Gustaf Lindvall’s net and executed a lacrosse goal. The following day, Michkov was on the scoresheet again as a youthful Russian team signed off with a 5-2 win over the Czechs to take third place in the competition.

Like any sniper, though, Michkov’s thoughts were as much on the chance he missed as the goal he so spectacularly scored.

“In the first period I should have scored, but the puck didn’t quite drop for me. In the second, when I scored, everything fell into place; the puck dropped onto the crook, I decided to give it a go and it all worked out,” he said after the game. “I don’t even remember when I first learned that trick, but if you keep slaving away at it, you can work these things out.”

Meanwhile, the SKA youngster got rave reviews from his clubmate Lars Johansson, who was understudy to Lindvall for the game against Russia. “Michkov’s goal was unreal,” he told RIA Novosti. “I know how much of a skilled player he is, but I’m still amazed by how quick his hands are, how quickly he reads the situation.

“When I was 16, I was nowhere near that level. Michkov is a unique talent, and I’ve seen how hard he works. I hope he’ll just get better and better.

“He’s scored on me more than once in practice and, believe me, he’s scored some crazy goals there, but I’ve never seen a ‘lacrosse’ goal before. Matvei loves to compete, so it’s always fun to come up against him.”

Three wins from three saw the host nation top the standings in Krefeld. This four-team contest came down to a winner-takes-all showdown between Germany and Slovakia on Sunday afternoon and Toni Soderholm’s team came out on top with a 4-1 verdict. Leonhard Pfoderl opened the scoring after 14 seconds, Tobias Rieder led the scoring with two goals and an assist, while Marcel Noebels had two helpers. Dominik Bittner was the other German scorer, while Samuel Bucek got Slovakia’s consolation effort. Switzerland took third place in the group after recovering from 0-2 to post a 3-2 victory over Russia ‘B’. Long-serving captain Andres Ambuhl started the fightback, Sven Andrighetto potted the equalizer and Inti Pestoni grabbed the winning in the final minutes.

Rieder’s game-winning display against Slovakia helped him to the top of the scoring charts with 5 (4+1) points. Noebels’ handful of assists saw him join his colleague on five, while Pfoderl finished with 4 (3+1) from the weekend.

Slovenia hosted a four-team tournament in Jesenice, inviting Belarus, France and Austria to the competition. For three of the teams, this was a chance to prepare for the World Championship promotion campaign in Division IA in the spring, while for Belarus it was an opportunity to build a team ready for elite pool action in Finland in May.

With that in mind, the Belarusians brought a young roster to the competition and named 20-year-old Ilya Usov as captain. The formula was successful: after edging past Austria in overtime in the opening game, the Belarusians went on to top the standings with wins over Slovenia (3-0) and France (6-3). Austria took second place with OT victories in its other two games, while France’s 3-2 success against the host nation secured third place. Slovenia managed just three goals in three games, giving head coach Matjaz Kopitar plenty to ponder before hosting Division IA in April.

Denmark hosted a three-way affair involving Norway and Latvia, with all three countries agreeing to bring experimental rosters to the games in Esbjerg and Vojens. The host nation enjoyed two victories, beating Latvia 5-1 and Norway 3-1. In the third game, Latvia blanked the Norwegians for a 3-0 win.

Hungary also staged a three-team event involving Italy and Ukraine. The host nation came out on top, winning 4-1 against Italy and 2-1 against Ukraine. The Italians pipped the Ukrainians to second place, winning in a shoot-out against a team depleted by last minute withdrawals on arrival in Budapest.

Estonia hosted the Baltic Challenge Cup that after two wins for both teams ended with a winner-takes-it-all game between Poland and Estonia that the Poles won easily 8-1. Latvia’s B-team finished in third place getting its only win against Lithuania, 6-1.