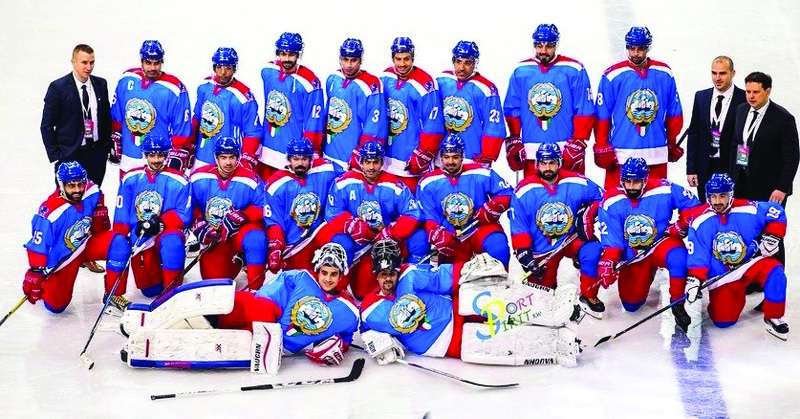 The Kuwait National Ice Hockey Team Federation is currently busy preparing for its national team to participate in the upcoming 3rd GCC Games set to be held in Kuwait on January 9-19, 2022. “We want to win. That’s our objective,” started Khaled Mubarak Al-Mutairi, the Vice Chairman of the Board of Kuwait Winter Games Club, which manages the Kuwait National Ice Hockey (KNIH) men’s and women’s teams.

The teams are participating in a three-week camp in Turkey starting today for some “rigid training” in preparation for the tournament, Mutairi said. Kuwait looks at the GCC Games as an opportunity to showcase its skills not only in hockey, but other games to be featured in the regional tournament. 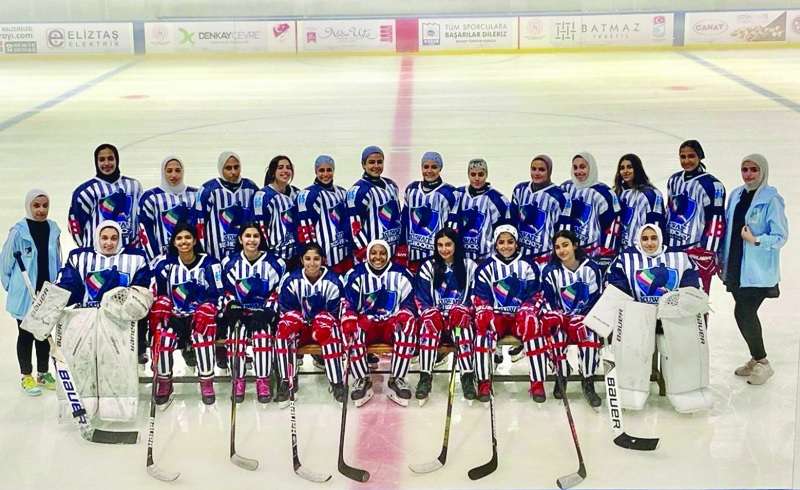 KNIH has been an associate member of the International Ice Hockey Federation (IIHF), an international organization for ice hockey and in-line hockey based in Zurich, Switzerland, and has 81 member countries. But Mutairi admits that winter games are not very common among Kuwaitis. Yet, he says national players can compete on a high level through practice and perseverance, fueled by the love of the game.

“Even countries with ice or snow have to practice and train on the man-made-installed facilities. Trainings and the actual games are not normally done in the wild or snow mountains, so this means that we can learn how to play too,” Mutairi argued. “Whether you live in a sandy desert in the Middle East or a European country with snow, training and the formal games are usually held in installed facilities, so it can easily be learned if your heart is into it,” he added.

Mutairi further spoke about how the Kuwait National Ice Hockey team was conceived from scratch. “I remember visiting the Ice Skating Rink in 1987 and I saw a group of Canadian and US players taking part in a hockey game. Many of us were naïve to this sport, but eventually our interest grew, and I encouraged many of my friends to join and play hockey,” he said. “We started with nothing, and our club here started with nothing too; but we are determined to learn. Eventually we applied for government recognition – we developed a club and we were able to go through the tedious process of accreditation,” he added.

National team
After the liberation in 1991, Mutairi, along with Fhaid Hamad Al-Ajmi, the current Board Chairman of the Kuwait Winter Games Club, created a small hockey team and they started trainings and workshops to form a national team for Kuwait. “It was small group then, but the interest of Kuwaitis has sprung up from then onwards until we finally got the nod of the government,” Mutairi remembered.

“When we were invited in Scotland for a hockey tournament in 1993, we joined without hesitation; we went there, 23 of us without any support from the government. Then several tournaments followed after that,” he reminisced. As years went by, those who were part of the team became trainers and referees. “They are still with us, and we keep them because of their experience which they can share to our new members,” he said.

Ajmi admitted meanwhile that getting recognition from the government was not an easy task. “I thought it was easy at first, but it took us years to comply with government requirements. At first, we were told to get real ice hockey training, then we were told to learn how to run and manage a team. After that, they told us to get stronger support from people and fans in order to move forward. It took us two years to comply with those requirements, but we managed it anyways,” he explained.

“In 1997, we were invited by China to join in the tournament. We lost as expected because we have no support from the government, but we were happy representing our flag in an international arena,” Ajmi noted. “That game attended in China paved way for the government to do something for the ice hockey team in Kuwait. It was 1998 when the Kuwait Olympic Committee noticed us and so they started giving us some sort of budget. They had given us a chance to form a committee until we were finally and officially recognized by the Public Authority for Youth and Sports in 2013,” he said.

Kuwait’s ice hockey teams did most of their home trainings at the Ice Skating Rink at Al-Soor Street. But when the rink was demolished in 2018, they went ‘homeless’ temporarily. In the absence of the standard-size training grounds, the club had to send their players outside the country for practice. In 2019, the government allowed the construction of its new training ground for the ice hockey team. It was built at the Bayan district known now as the Kuwait Winter Games Club.

“With the government’s recognition, we were able to get the proper funding for the construction of the new ice skating rink, as well as the funding needed for our players and members,” Ajmi said. He also thanked “all the people who were instrumental for the success of the club and the creation of this federation.” The ice skating rink at the Kuwait Winter Games Club is open to public every Wednesday, Thursday, Friday and Saturday (10am to 10pm), but closes for the rest of the week for the Kuwait National Team trainings. 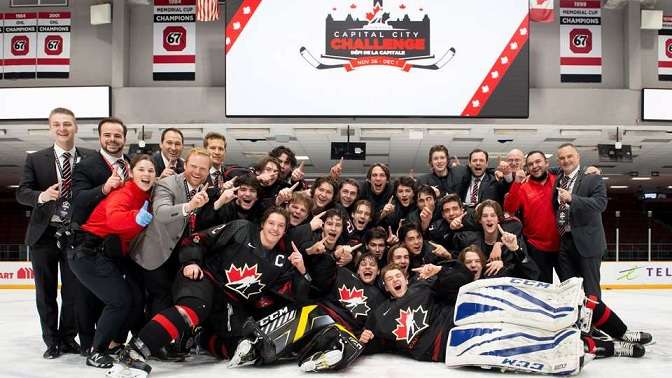 Team Canada Black has been crowned champions at the 2021 Capital City Challenge after downing Team Canada Red 5-4 in an overtime thriller in the tournament final on Wednesday night.

Team Canada Black jumped out to a two-goal lead in the first period after goals by Ty Halaburda (Victoria, B.C./Vancouver, WHL) and Alex Pharand (Sudbury, Ont./Hamilton, OHL), but Matthew Wood (Nanaimo, B.C./Victoria, BCHL) and Natan Éthier (Rosemère, Que./Saint-Eustache, LHM18AAAQ) responded with goals for Team Canada Red to even the score at 2-2. The teams traded goals in the second as Halaburda notched his second goal of the game and Owen Outwater (Orleans, Ont./North Bay, OHL) scored just over two minutes later to tie the game again.

The final minute of the third period was a wild one. Riley Heidt (Saskatoon, Sask./Prince George, WHL) fired home a rebound with 29 seconds to go to put Red ahead, but Zach Benson (Chilliwack, B.C./Winnipeg, WHL) netted his tournament-leading seventh goal on a shot off the face-off with 0.4 seconds left to send the game to overtime. Calum Ritchie (Oakville, Ont./Oshawa, OHL) was the extra-time hero, beating Team Canada Red goaltender Jackson Unger (Calgary, Alta./Edge School, CSSHL) on a breakaway in the extra frame.

“It was a little bit of a blur. I saw the puck bounce off the boards and I had the opportunity to get a breakaway, so I just skated as hard as I could,” Ritchie said. “Muscle memory from practice took over, and to be honest I do not really remember [scoring], but it was such a great feeling to get the game-winner.”

In the third-place game earlier on Wednesday, five different skaters found the back of the net for Team Canada White as it defeated Canada’s National Women’s Team 5-1.

Carey Terrance (Akwesasne, N.Y./Erie, OHL) kick-started the offence for Canada White, opening the scoring less than three minutes into the game. Tyler Peddle (Antigonish, N.S./Drummondville, QMJHL) added a goal and an assist, and Ethan Gauthier (Drummondville, Que./Sherbrooke, QMJHL) chipped in with a pair of helpers.

“Our players were a little bit disappointed after yesterday’s result, but overall I am proud of the way they finished the tournament,” said Canada White head coach Rob Wilson (Toronto/Peterborough, Ont.). “We had such a great group of players and staff, and it was a pleasure to be a part of this team. I am looking forward to watching our players flourish as they continue on in their careers.”