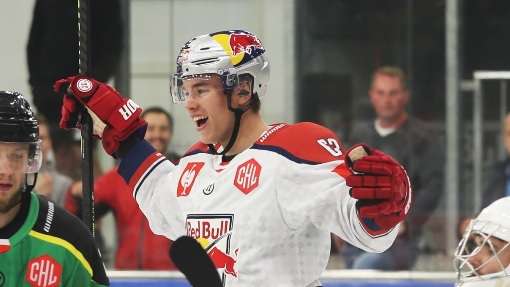 Last year’s World Juniors in Edmonton were supposed to be a special time for German hockey prospect Jakub Borzecki.

He made the squad as an 18-year-old, and was expected to play a key role, including on the power play, as part of a team considered to be his country’s best in years.

But, he never saw the ice.

Four days before Germany’s tournament opener on Christmas Day, and just one day after exiting his mandated travel quarantine, Borzecki learned he had tested positive for COVID-19.

“I was just really excited to actually fly out to Canada to play at the World Juniors,” he said.

”I was really looking forward to it.”

He was the last of nine German players to test positive for the coronavirus.

The outbreak forced the team back into isolation and left it with only 16 players, 14 of them skaters, for its first three games instead of the usual roster of 25.

“At first I didn’t quite realize it,” Borzecki said. “I felt great …I still did my workouts as planned. I didn’t feel anything.”

“It was a pretty, pretty big shame to not be able to get out.”

WE TESTED SO MUCH

Borzecki spent most of his time alone in his hotel room less than a block away from Rogers Place where his teammates carried on without him .

He says he was initially able to gather for stretching exercises and video games with the eight others who had also tested positive.

“I was actually shocked that so many guys went missing because we expected everybody to be just fine. We tested so much in Germany.”

The players watched on television from their hotel as an outmanned Team Germany held its own in a tournament-opening 5-3 defeat to Finland before running out of gas a day later in a 16-2 defeat to the host Canadians.

“It was a big challenge for them and a lot of ice time but they really managed well.”

A 16-man German team scored a 4-3 overtime upset over Slovakia in its third game to keep its tournament hopes alive.

The squad was back to full strength, minus Borzecki, for its final opening round game, a 5-4 win over Switzerland.

“I was sweating in my room just watching the games, because it was really exciting to watch the guys play,” he said.

“I was really happy for them.”

SHOCKED TO SEE ME

The win over Switzerland earned Germany its first ever quarterfinal appearance at the World Juniors, and a matchup against a Russian team considered to be among the favourites to win the event.

Ahead of the game, someone on the team arranged to have Borzecki’s jersey hung on the glass behind the team’s bench during the game, much to his surprise. 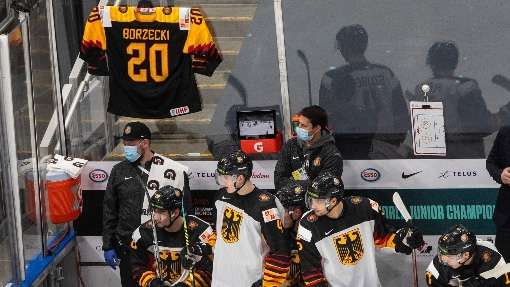 Germany forward Jakub Borzecki’s (20) jersey hangs on the bench after he has been unable to play in the tournament due to a COVID positive test, as the Germans take on Russia during first period IIHF World Junior Hockey Championship action in Edmonton on Saturday, January 2, 2021

“I just had my white jersey in my room, and suddenly my other jersey was hanging there,” he said. “Just had a big smile all over my face.”

“[I was] a little sad too of course, just seeing my jersey, but not being able to get out.”

His teammates exceeded expectations again, but came up short in a narrow 2-1 defeat to Russia.

The next day marked the end of what would be more than three weeks in quarantine, and he was able to board the team bus and fly back to Germany with his teammates.

“The guys were just shocked to see me.”

Borzecki, now 19, is in his first year of senior pro hockey with EC Red Bull Salzburg of the ICE Hockey League.

The power forward has recorded seven points, including two goals, in 25 games so far this season and will be part of Team Germany at this year’s World Juniors.

“I don’t take anything for granted,” he said of making his tournament debut. “It’s gonna be a big relief to finally be able to be there.”

A relief that will help bury thoughts of what might have been for him and his team last year.

“I think if everybody would have been there, we could have had a great chance to get even further,” he said.

“It was a nice hotel room at least.”