That win over Canada helped the Finns claim top spot – both in the Channel 1 Cup and the overall Eurotour standings. But the winning margin was complicated.

Over the course of the tournament, Russia compiled 10 points to Finland’s seven. However, the Russians played an extra game – the curtain-raiser against Canada on Dec. 15. As a result, Russia’s win over Sweden was discarded from the ranking. That made Sunday’s clash between Finland and the host nation into a winner-takes-all decider.

The curios continued. After 60 minutes, the teams were locked at 2-2. In overtime, though, the Russians tested a tactic successfully used by Sergei Fyodorov with CSKA Moscow in the KHL. Goalie Ivan Fedotov was called to the bench in favour of an extra skater; the gamble was that the Red Machine could retain possession and protect the empty net.

It didn’t pay off this time. Finland snatched possession and Sakari Manninen surged towards the empty net, only to be hauled down by Slava Voinov. Ordinarily, the foul would have resulted in a penalty shot, but with the empty net in play Manninen was credited with the winning goal. The Finns felt this was poetic justice after Voinov’s controversial goal late in the third period tied the game. There was nothing wrong with the defenceman’s shot, but Finnish observers were convinced that goalie Harri Sateri was impeded earlier in the play and head coach Jukka Jalonen was outspoken in his criticism of the officiating. “It was 100% interference,” the coach told the Iltalehti newspaper. “There’s nothing unclear and no reason why it shouldn’t be given. Even a blind man can see it.”

Russia tops Canada for the first time since 2017

The opening game saw Russia edge Canada 4-3, with the visitor fighting back from 1-4 after 40 minutes but falling just short in the third. That was the first time Russia defeated its old rival since the 2017 Channel 1 Cup, when Oleg Znarok’s team enjoyed a 2-0 victory in its final tournament before PyeongChang.

This time, Russia ramped up the Olympic history, donning a uniform inspired by the 1956 Soviet jerseys from the country’s first Olympic gold in Cortina d’Ampezzo. The Russian win came on goals from Lokomotiv’s Yegor Korshkov and Alexander Yelesin, plus further tallies from Nikita Nesterov and Vadim Shipachyov. The latter two were part of the 2018 golden roster in Korea.

Vladislav Tretiak, head of the Russian Hockey Federation, talked up the impact of Russia’s success. “No matter what line-ups the teams put out, games [against Canada] always attract extra interest,” he told Championat. “Almost the entire country is talking about this win. Maybe we’ll see the same in the Olympic final.” 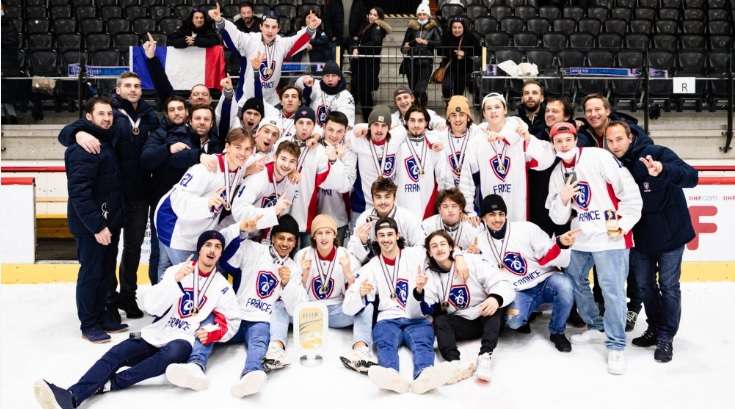 The French players pose for a team photo after winning the gold-medal trophy at the 2022 IIHF Ice Hockey U20 World Championship Division I Group B in Tallinn.

As if a crystal ball had been made use of by the schedulers of the 2022 IIHF Ice Hockey U20 World Championship Division I Group B, the final day of tournament play featured a winner-take-all match-up of France against Slovenia. Coming in, Slovenia was undefeated in four games, outscoring opponents 26-10, while France had only lost one game, a wild one that came to a conclusion in favour of Ukraine in overtime.

Adding seasoning to this fiery stew, France’s Tomas Simonsen entered the contest as the tournament’s clear-cut top scorer with seven goals and 13 points while Slovenia’s Marcel Mahkovec was tied for second overall with three goals and 10 points, while being tied for first overall with a +10 rating. In short, the two most prevalent offensive weapons were going up head to head for promotion.

And the game proved to be every bit the thriller a match of this magnitude should be.

France was able to get on the board fairly early in the first period when Jordan Herve, battling in front of the Slovenian net, tapped in a beautiful pass from Theo Gueref after he had gotten the puck from Simonsen. That was at the 5:25 mark and was followed up by France’s second goal of the period in the ninth minute of play, when Herve was once again Johnny on the spot, rifling in the rebound of a quick wrister from the blueline by Antoine Fermine. Slovenia reacted like a team stunned and concentrated on stopping the bleeding for the rest of the first period.

Whatever words of motivation Slovenian coach Lovro Bajc was able to find in the first intermission, they eventually bore fruit. The team came out of the gates looking like men on a mission and were able to cut the lead to one already in the third minute when Jure Povse broke through the French defence and saw his flailing shot attempt, interrupted by a French defenceman’s stick in the last second, nonetheless slip by French goaltender Antoine Keller.

The game continued to see chances created by both teams until Miha Bercic tied things up in the fourth minute of the third period, knocking in a centre-slot rebound of a shot from the right circle while on the power play. Despite this new lease on life, Slovenia joined France in playing a careful game from there on out, as neither team appeared ready to make what could prove to be a fatal mistake.

Alas, one was ultimately made.

Maintaining puck control in the Slovenian zone, France’s Gueref received a sly pass from the blueline and found defenceman Maxime Corvez all alone at the blueline. Corvez made use of the traffic created by Simonsen in front of the net, who managed to attract the ire of two Slovenian defenders and rocketed a perfectly placed wrister over the shoulder of Slovenian netminder Luca Kolin, whose view was clearly blocked. With just a little over six minutes to play, the intensity picked up across the board with France in the pole position.

Slovenia created several chances but couldn’t get the puck in the net right on up to the last minute of play. They continued giving their all to create pressure, but a French forward got hold of the puck with more than enough time to skate it to centre ice and at least dump it in to eat away the final seconds. Instead, he attempted to hit the empty net from France’s half of the ice, hitting the post and leading to a crucial face-off in France’s zone with 10 seconds to go. With everything on the line, France won the face-off and the final 10 seconds were pushed and shoved away below France’s goal line, leading to an ensuing rush of the team from the bench once the siren roared, with sticks and gloves and helmets being tossed all over the place.

With two goals and some clutch defensive play to wrap things up, Herve was named the player of the game for France, his line with Gueref and Simonsen proving to be the most potent in the tournament.

The road to final

Thanks to a four-goal outburst in the 3rd period of the team’s opening-day game against an upstart Japanese squad, Slovenia won its first game 7-3 and then edged out Poland with a tight 3-1 win, which entered the final day of play at the bottom of the standings. The Slovenes had obviously enjoyed the taste of victory and would go on to roll over its next two opponents.

Despite a 2-2 score after 20 minutes of play, Slovenia knocked off host Estonia 8-2 and then barrelled over a potent Ukrainian attack 8-4, doing so primarily on the strength of four first period goals. That had the team rolling on all cylinders heading into the final.

France’s route to the final was more arduous, despite dominating Poland in Game 1 to the tune of a 6-2 final. That was followed by a labouring 2-0 victory over Estonia and a wild 7-6 overtime loss to Ukraine, one that had seen Les Bleus come back from a 5-1 deficit to take a 6-5 lead in the third period, only to allow the 6-6 equalizer with over two minutes left in regulation time. By the third minute of overtime Ukraine had snuck away with a second point.

This led to an extremely important match-up against the similarly successful Japanese side, one it would go on to take 6-4. Interestingly, France scored four times in the second and entered the third period with a 4-0 lead only to allow four goals against in the third, making that period the second one in the tournament in which France would open up the floodgates. Fortunately, it too was able to pop in a few goals in the third as well, allowing it to play for promotion on the tournament’s final day.

Despite many periods of solid hockey, even against France and Slovenia, Estonia and Poland entered the last day of play both within reach of relegation. This was due in part to the 4-3 overtime victory for Estonia against Poland the day before, allowing each team to collect at least a point and stay within striking distance of maintaining the class. On the final game day, both teams would have an uphill battle, with Poland having to face neighbour Ukraine while Estonia would go up against Japan. Both Ukraine and Japan had a solid tournament, with Japan having lost only to Slovenia and France, even having beaten Ukraine in their direct match-up.

Simonsen, who takes a regular shift for Amiens in France’s top circuit Ligue Magnus, where he has 17 points in 17 games, would go on to lead the tournament in scoring with seven goals and 15 points in five games. After that, a trio of Ukrainians dominated the scoresheets, with forwards Danylo Korzhyletsky (14 points), Mykhailo Simchuk (13), and Denys Honcharenko (10) coming in 2nd-4th. Slovenes Mahkovec and Luka Gomboc came in 5th and 6th in scoring with 10 and nine points respectively, but both were held off the scoresheet when it mattered most against France.

France will now head back up into the Division I Group A, replacing Hungary, which is on its way down after losing to Denmark in an all-decisive final day match-up pitting two teams that had yet to register  a point. It’s been a few years since current Columbus Blue Jacket Alexandre Texier was making music for France in the Division IA, but that is where the program sees itself, with the proof now in the pudding after this tournament. Slovenia was not able to completely live up to its billing as the group favourite heading in but should maintain that status heading into next year’s contest, despite Hungary joining the ranks. Both Japan and Ukraine showed that they clearly belong at this level and have much to build on after this year’s tournament experience.

For Poland, this year’s tournament ends with a demotion into the Division II Group A, and it’ll surely come with the disappointment of knowing that they were able to skate and perform against just about all opponents at this level for periods at a time but ended up being one overtime goal away from maintaining the class. Thanks to some convincing play in Brasov, Romania, Italy will replace Poland in the Division IB, meaning next year’s tournament will feature this year’s host Estonia, Hungary, Italy, Japan, Slovenia, and Ukraine.