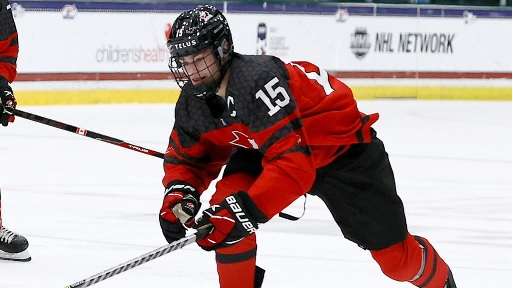 Kaiden Guhle is one of three players with Canada for the 2022 IIHF World Junior Championship that played in the 2-0 loss to the United States in the championship game of the 2021 WJC.

“Just unfinished business for the team,” Guhle said. “Playing at home, there’s a lot of pressure when you play for Team Canada. You’re expected to win. I think the guys know that. The guys are hungry for a gold medal this year.”

Guhle scored three points (two goals, one assist) and averaged 15:53 of ice time in seven games, fourth among Canada defensemen. He likely will have a bigger role this year.

Since the 2021 WJC, Guhle played three games for Laval, Montreal’s American Hockey League affiliate, and after playing in three preseason games this season, he was one of the final cuts from Canadiens training camp.

He said he feels that professional experience on and off the ice has made him a better player entering his second WJC.

The top four teams in each group will play in the quarterfinals Jan. 2. The semifinals are scheduled for Jan. 4, and the championship and third-place games Jan. 5.

Here’s a look at each Group A team, in predicted order of finish:

Outlook: Canada is stocked with dynamic offensive players, topped by forwards Dylan Guenther (Arizona Coyotes), Kent Johnson (Columbus Blue Jackets) and Perfetti, but the offensive lynchpin could be Wright (6-foot, 185 pounds), projected to be the No. 1 pick of the 2022 NHL Draft with an all-around skill set that’s been compared to Boston Bruins center Patrice Bergeron. There’s also forward Connor Bedard, the seventh 16-year-old selected to play for Canada at the World Juniors, joining a list that includes Wayne Gretzky, Sidney Crosby and Connor McDavid, and who has a history of dominating older competition; he scored 14 points (seven goals, seven assists) in seven games as a 15-year-old at the 2021 IIHF Under-18 World Championship. The defense includes a potentially dominant top pair in Guhle and Owen Power (Buffalo Sabres), and goalie Sebastian Cossa (Detroit Red Wings) is a 6-foot-6 wall behind them. Canada is a favorite to win Group A and its second championship in three years.

Outlook: Finland will be keyed by its defensemen, led by Topi Niemela (Toronto Maple Leafs), voted best at the position at the 2021 WJC after he scored eight points (two goals, six assists) in seven games and helped Finland finish third. For scoring, Finland could look to Kemell (5-11, 171), an A-rated forward in NHL Central Scouting’s players to watch list for the 2022 draft who has scored 18 points (12 goals, six assists) in 21 games for JYP in Liiga, the top professional league in Finland. Roni Hirvonen (Toronto Maple Leafs), Roby Jarventie (Ottawa Senators) and Brad Lambert (2022 draft eligible) also return when Finland looks to win for the first time since 2019.

Outlook: The group of defensemen could be a strength led by David Jiricek (6-3, 189), an A-rated player in Central Scouting’s players to watch list who is playing in the top pro league in Czechia. He scored two points (one goal, one assist) and averaged 16:11 of ice time in five games at the 2021 WJC and will be joined by Stanislav Svozil (Tampa Bay Lightning) and Michael Krutil (Chicago Blackhawks) from the 2021 group of defensemen. Forwards Jan Mysak (Montreal Canadiens), captain of the 2021 team, and Pavel Novak (Minnesota Wild) will be counted on to supply offense. Mysak leads Hamilton of the Ontario Hockey League with 17 goals in 24 games; Novak leads Kelowna of the Western Hockey League with 31 points (13 goals, 18 assists) in 24 games.

Outlook: Germany will have a tough time matching its sixth-place finish at the 2021 WJC without its best eligible players, forwards Tim Stutzle (Ottawa Senators), JJ Peterka (Buffalo Sabres), and Lukas Reichel (Blackhawks). Elias, who played on the top line with Stutzle and Peterka last year, will be counted on heavily. Another player who could generate offense is Burghart, who scored 14 goals in 12 games in Germany’s junior league. Goalie Florian Bugl (2022 draft eligible), who helped Germany to wins against Slovakia and Switzerland at the 2021 WJC, will return but will be pushed for the starting job by Nikita Quapp (Carolina Hurricanes).

Outlook: Austria finished 10th at the 2021 WJC and returns looking for its first win in its fifth tournament appearance (0-17). It won’t be easy against its preliminary-round competition, but it should be able to score more than the one goal it had in four games last year. Kasper (6-1, 183) is an A-rated forward for the 2022 draft who has scored six points (two goals, four assists) in 24 games for Rogle in the Swedish Hockey League. He had one assist in four games as a 16-year-old at the 2021 WJC and is one of 10 returning players. Among them is forward Senna Peeters (2022 draft eligible), who scored Austria’s only goal and will play in the WJC for the third time. The 19-year-old has scored 13 points (three goals, 10 assists) in 26 games for Halifax of the Quebec Major Junior Hockey League.