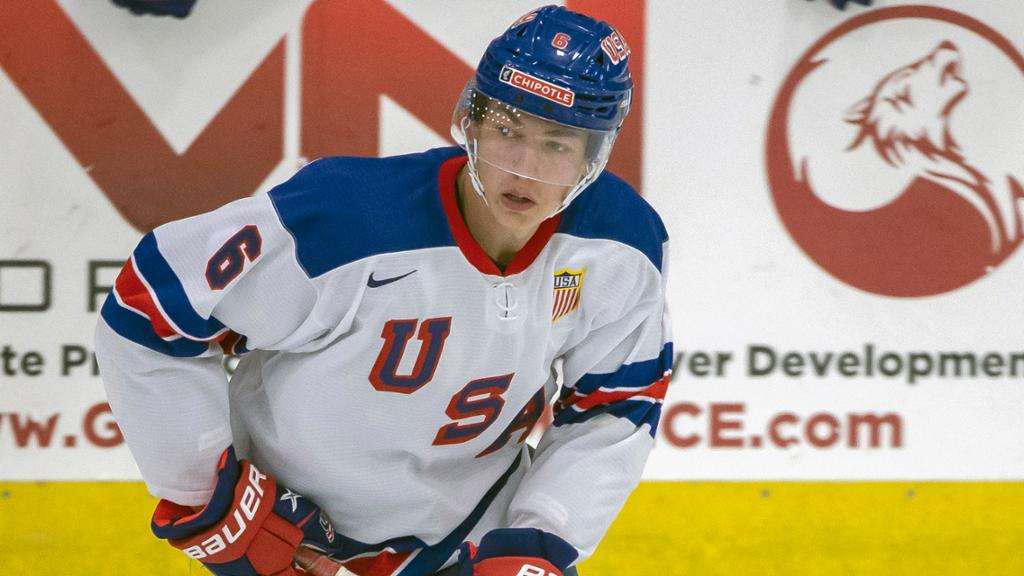 Luke Hughes, selected No. 4 by the New Jersey Devils in the 2021 NHL Draft, is looking forward to having the opportunity to make history as a member of the United States at the 2022 IIHF World Junior Championship.

The 2022 WJC is Aug. 9-20 at Rogers Place in Edmonton. The tournament originally was scheduled for Dec. 26-Jan. 5 but postponed Dec. 29 because of concerns surrounding the coronavirus.

The United States is scheduled to play preliminary-round games in Group B with Sweden, Switzerland, Germany and Austria. Group A consists of Canada, Finland, Czechia, Slovakia and Latvia.

Latvia was added to replace Russia, which has been banned from international play because of its invasion of Ukraine.

Hughes, the youngest brother of Vancouver Canucks defenseman Quinn Hughes and Devils center Jack Hughes, had 39 points (17 goals, 22 assists) in 41 games as a freshman at the University of Michigan last season. The 18-year-old defenseman was a top-10 candidate for the Hobey Baker Memorial Award presented annually to recognize the top NCAA men’s hockey player.

“It’s an honor to wear the jersey whenever you can,” Hughes said. “To go back there and try to defend that is super important for USA Hockey and our country. I think it’s really exciting, and we’re going to do our best. We’re going to go game by game, and we’re really excited as a team.”

The top four teams in each group will play the quarterfinals Aug. 17. The semifinals are Aug. 19, and the championship and third-place games are Aug. 20.

There will be no relegation round, meaning the same 10 teams will play in the 2023 WJC in Halifax, Nova Scotia and Moncton, New Brunswick from Dec. 26-Jan. 5.

All games will be shown on NHL Network in the United States and TSN in Canada.

Outlook: Leaman will incorporate a fast and supportive game up front and on the back end with the help of returning forwards Logan Cooley (Arizona Coyotes), Brett Berard (New York Rangers) and Landon Slaggert (Chicago Blackhawks), and defensemen Brock Faber (Minnesota Wild), Tyler Kleven (Ottawa Senators) and Hughes. Goalies Andrew Oke (2023 draft eligible) and Kaidan Mbereko (2023 draft eligible) each impressed during development camp and are the frontrunners to compete for playing time. Cooley, a freshman center at the University of Minnesota, was second on the USA Hockey National Team Development Program Under-18 team with 75 points (27 goals, 48 assists) in 51 games last season. He was second for the second-place United States at the 2022 IIHF Under-18 World Championship with 10 points (three goals, seven assists) in six games. Stramel (6-foot-3, 212 pounds), a right-shot center who will be a freshman at the University of Wisconsin, had 22 points (10 goals, 12 assists) in 26 games for the United States under-18 team last season. Faber is team captain. He was traded to the Wild with the No. 19 pick in the 2022 NHL Draft by the Los Angeles Kings for forward Kevin Fiala on June 29.

Outlook: Sweden won’t have forwards Alexander Holtz (Devils) or William Eklund (San Jose Sharks) to lead the offense but remain solid in goal with Jesper Wallstedt (Wild), Calle Clang (Pittsburgh Penguins) and Carl Lindbom (Vegas Golden Knights), and at defenseman with Simon Edvinsson (Detroit Red Wings), Helge Grans (Kings) and William Wallinder (Red Wings). Offensively, Monten will look to Daniel Ljungman (Dallas Stars), Theodor Niederbach (Red Wings), Oskar Olausson (Colorado Avalanche) and Jonathan Lekkerimaki (Vancouver Canucks). Wallstedt will play for Iowa in the American Hockey League this season after going 12-10-0 with a 1.98 goals-against average and .918 save percentage for Lulea in the Swedish Hockey League last season. The 19-year-old was 2-0-0 with a 1.50 GAA and .962 save percentage at the 2022 WJC in December before the tournament was postponed.

Outlook: Germany will have a tough time matching its sixth-place finish at the 2021 WJC without its best eligible players, forwards Tim Stutzle (Senators), JJ Peterka (Buffalo Sabres), and Lukas Reichel (Blackhawks). Defenseman Luca Munzenberger, who averaged 21:41 of ice time in five games at the 2021 WJC, will be counted on heavily. The 19-year-old, selected by the Edmonton Oilers in the third round (No. 90) of the 2021 draft, will be a sophomore at the University of Vermont this season. Goalie Florian Bugl (2023 draft eligible eligible), who helped Germany to wins against Slovakia and Switzerland at the 2021 WJC and finished with a 2.95 GAA and .896 save percentage in three games, is returning but will be pushed for the starting job by Nikita Quapp (Carolina Hurricanes).

Outlook: Switzerland will rely on goalies Noah Patenaude (7-2-2, 2.96 GAA, .914 save percentage) of Saint John in the Quebec Major Junior Hockey League and Kevin Pasche (20-19-4, 2.87 GAA, .903 save percentage) of Omaha in the United States Hockey League to remain competitive. Forward Simon Knak (Nashville Predators) returns for his third World Juniors after he was captain for ninth-place Switzerland in 2021. Defenseman Brian Zanetti (Philadelphia Flyers) had 26 points (four goals, 22 assists) in 56 games for Peterborough of the Ontario Hockey League last season and should play a big role. Dionicio (6-2, 207) had 31 points (six goals, 25 assists) in 57 games for Niagara in his North America debut last season and is on NHL Central Scouting’s Players to Watch list for the 2023 draft.

Outlook: Austria finished 10th in 2021 and returns looking for its first win in its fifth tournament appearance (0-17), but it will not be easy against its preliminary-round competition. It will be without Marco Kasper (Red Wings), the No. 8 pick in the 2022 draft. Forward Senna Peeters, who scored Austria’s only goal and will play his third WJC, will be counted on to provide some offense. The 20-year-old had 17 points (five goals, 12 assists) in 34 games for Halifax of the Quebec Major Junior Hockey League last season. Kasper, who signed a three-year, entry-level contract with Detroit on July 13, decided to take a break from hockey in August because of a heavy workload on an international level and with Rogle BK in the Swedish Hockey League last season.