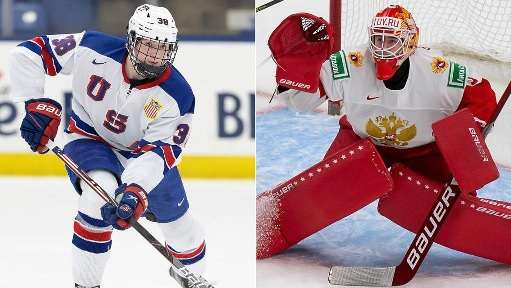 Jake Sanderson, selected No. 5 by the Ottawa Senators in the 2020 NHL Draft, is looking forward to having the opportunity to make history as a member of the United States at the 2022 IIHF World Junior Championship.

Sanderson, a 19-year-old sophomore defenseman at the University of North Dakota, had two assists and was plus-7 while averaging 18:04 in ice time in seven games at the 2021 WJC. On Tuesday, he was named United States captain for the tournament.

“One thing that played a big part in the success we had was coming together as a team as fast as we could,” Sanderson said. “It’s a pretty quick tournament and there are a lot of games in a short amount of time. The team that comes together, builds chemistry, and trusts each other the fastest is going to have success. And that’s what our group did last year.”

The United States is scheduled to play preliminary-round games at WP Centrium in Red Deer in Group B with Russia, Sweden, Slovakia and Switzerland. Group A consists of Canada, Finland, Czechia, Germany and Austria.

The top four teams in each group will play in the quarterfinals Jan. 2. The semifinals are Jan. 4, and the championship and third-place games are Jan. 5.

Outlook: Leaman returns and should again incorporate a fast and supportive game up front and on the back end with the help of returning forwards Matty Beniers (Seattle Kraken), Brett Berard (New York Rangers), and Landon Slaggert (Chicago Blackhawks), and defensemen Brock Faber (Los Angeles Kings), Tyler Kleven (Senators) and Sanderson. Drew Commesso (Blackhawks) may have the edge in goal entering the preliminary-round stage, with Kaidan Mbereko (2022 draft eligible) also competing for playing time. Cooley, an A-rated skater on NHL Central Scouting’s preliminary players to watch list for the 2022 NHL Draft, is second in goals (14) and first in goals per game (1.50) in 20 games for USA Hockey’s National Team Development Program Under-18 Team.

Outlook: Zubov, a Hockey Hall of Famer, replaces fellow Hall of Fame member Igor Larionov, who guided Russia to a fourth-place finish in his only year as coach at the 2021 WJC. The country has finished in the top three in nine of the past 11 tournaments but last won in 2011. Goalie Iaroslav Askarov (Nashville Predators) returns after finishing 3-3 with a 2.50 goals-against average and .913 save percentage in 2021. He highlights a talented roster that includes forwards Nikita Chibrikov (Winnipeg Jets) and Danila Yurov (2022 draft eligible). Returning forward Marat Khusnutdinov (Minnesota Wild), who scored five points (two goals, three assists) while averaging 17:26 in ice time at the 2021 WJC, is captain. Defensemen Shakir Mukhamadullin (New Jersey Devils) will play in the tournament for the second straight year after he averaged a Russia-high 21:04 per game in ice time. Koromyslov (6-3, 180) is a B-rated skater on NHL Central Scouting’s preliminary players to watch list, and forward Matvei Michkov, eligible for the 2023 NHL Draft, is an exceptional talent who may be Russia’s top point producer in the tournament.

Outlook: Slovakia has been eliminated in the quarterfinal round the past six years after finishing third in 2015. Among the key returnees from the eighth-place team at the 2021 WJC are forwards Martin Chromiak (Los Angeles Kings), who has scored 32 points (13 goals, 19 assists) in 23 games for Kingston of the Ontario Hockey League, and defenseman Samuel Knazko (Columbus Blue Jackets). All eyes will be on returning forward Juraj Slafkovsky and defenseman Simon Nemec, each a potential top-15 pick in the 2022 draft. Nemec scored six points (one goal, five assists) in five games and was named tournament MVP as captain for second place Slovakia at the 2021 Hlinka Gretzky Cup. Slafkovksy scored nine points (three goals, six assists) in five games. Forward Dalibor Dvorsky, a 16-year-old who is eligible for the 2023 NHL Draft, led Slovakia with 12 points (eight goals, four assists) at the Hlinka Gretzky Cup and could surprise in his first WJC.

Outlook: Switzerland will rely on goalies Noah Patenaude (7-2-2, 2.96 GAA, .914 save percentage) of Saint John in the Quebec Major Junior Hockey League and Kevin Pasche (9-4-1, 2.20 GAA, .916 save percentage) of Omaha in the United States Hockey League to remain competitive. Bichsel (6-5, 216), who has one assist in 12 games for Leksand of the Swedish Hockey League, is a B-rated skater on NHL Central Scouting’s preliminary players to watch list. Forward Simon Knak (Nashville Predators) returns for his third World Juniors after he was captain for ninth-place Switzerland at the 2021 WJC. Canonica (5-11, 179), who has scored 27 points (10 goals, 17 assists) in 29 games for Shawinigan, is a C-rated skater after being passed over in the 2021 draft.