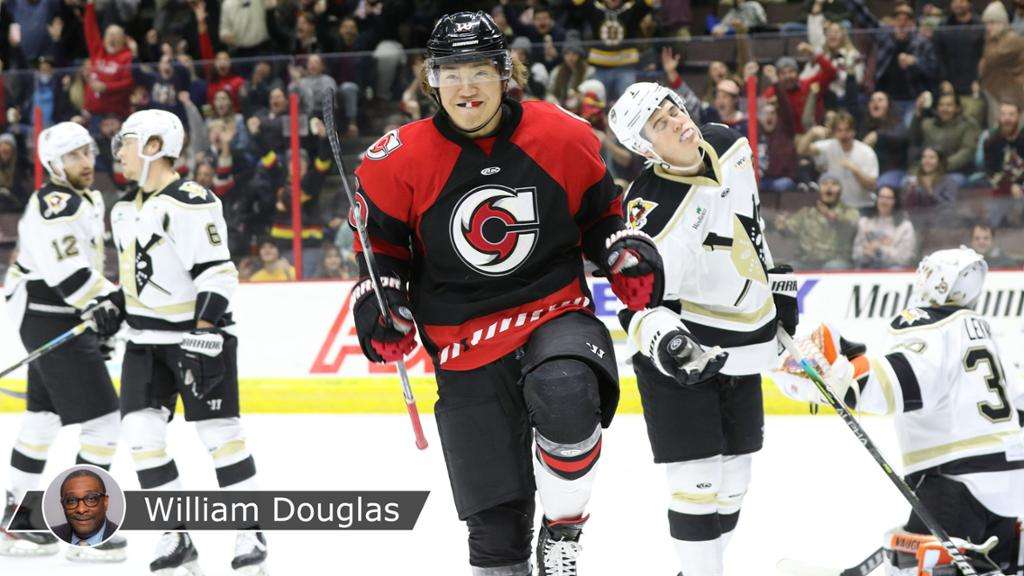 Yushiroh Hirano got an offer from the then-coach of Cincinnati of the ECHL that he couldn’t refuse.

“Matt Thomas called me and said, ‘I will let you score 35 goals if you come play for my team,'” Hirano said. “That’s when I decided to sign a contract with them.”

The 26-year-old forward from Tomakomai, Japan, appeared well on his way to that 35-goal mark, scoring 29 points (16 goals, 13 assists) in 25 games for Cincinnati before he signed a professional tryout agreement with Abbotsford, the Vancouver Canucks’ American Hockey League affiliate, on Jan. 5. Hirano made history Saturday when he became the first Japanese player born in the country to score in the AHL, on a one-timer 10 seconds into the first period against San Diego. He has scored two goals in six AHL games.

First of many for Yushiroh Hirano!

He led Cincinnati in goals, points and power-play goals (seven) and was the third-leading scorer in the ECHL before the call-up to Abbotsford. He was the ECHL Player of the Week for Dec. 6-12 after he scored 11 points (six goals, five assists) in four games.

“He has an NHL-caliber shot, hands down,” Cincinnati coach Jason Payne said. “With that shot, he just needs a split second to find that opening. And if he does, there’s a good chance that puck is going to find the back of the net and find it fast.”

Hirano is hoping to become the first Japan-born skater to play in the NHL and build on the legacy of players of Japanese heritage that includes 2017 Hockey Hall of Fame inductee Paul Kariya, Montreal Canadiens forward Nick Suzuki and Edmonton Oilers forward Kailer Yamamoto.

Yutaka Fukufuji, a goalie, became the first Japan-born player to appear in the NHL when he debuted with the Los Angeles Kings against the St. Louis Blues on Jan. 13, 2007.

It’s a quest that has taken Hirano from Japan to Sweden, then Youngstown, Ohio, in the United States Hockey League, and Wheeling, West Virginia, in the ECHL since 2012.

Hirano (6-foot, 216 pounds) also attended development camp with the San Jose Sharks in 2016 and Chicago Blackhawks in 2015. He said he feels age and experience is getting him closer to his goal.

“I have learned how important it is to showcase my best attributes as a player, recognizing my weaknesses via feedback from the coaches, and learned what the differences are between drafted players and myself,” Hirano said in written responses to questions. “I know I’ve gotten closer to the best league in the world. However, I understand that it is not an easy task to crack an NHL lineup, so my focus now has been showcasing what I can do and put up numbers in the AHL.”

He played one game for Wilkes-Barre/Scranton, the Pittsburgh Penguins’ AHL affiliate, in 2018-19, and became the first Asia-born player to score a point (an assist) in AHL history.

He said he’s using his time in the North American minor leagues to work on his defense and reading plays.

“One thing I’ve noticed and learned in the last few years in the ECHL is that how one mistake can change the scenario of the game,” he said. “In the AHL, it is evident that there are less mistakes on the ice all around.”

“Hockey in Japan is not nearly as popular as it is in North America,” he said, “and there are definitely areas of the sport we all want to see improve. But I think we are doing our best to make the change and make hockey one of the major sports in Japan.”

Hirano said he hopes to be part of that change by reaching the NHL.

“Absolutely,” he said. “I’m thinking about that every day.”