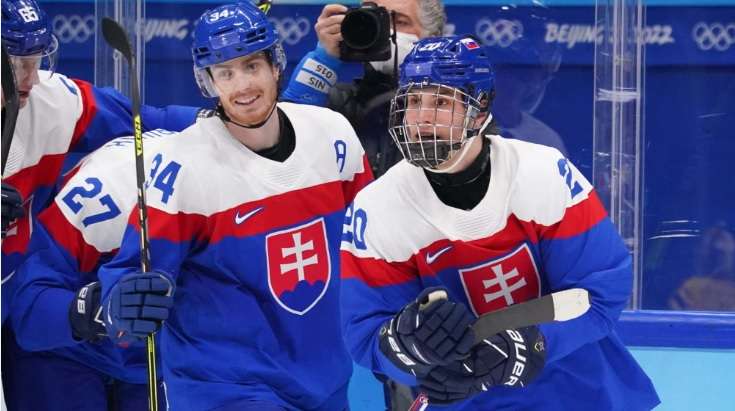 Slovakia’s Juraj Slafovsky (right) celebrates with teammates after scoring on Sweden in the bronze medal game.

Two goals in the second period and solid defence in the final 20 minutes gave Slovakia a 4-0 win over Sweden in the bronze-medal game at the National Indoor Stadium tonight. This marks the first ever Olympic medal for the Slovaks. In 2010, they had a 3-1 lead in the third against Finland but ended up losing, 5-3. There was no such collapse today.

As is often the case with bronze games, it took a while for the teams to get going. The opening 20 minutes was tame and uneventful, with the exception of one dangerous flurry around the Sweden goal. Juraj Slafkovsky made a little drop pass to Marek Hrivik, and he snapped a quick shot off the post. Moments later, Mislav Rosandic had a point-blank shot, but there were half a dozen bodies between him and the net, and his shot didn’t get through.

Sweden had the only power play on a rare minor to goalie Patrik Rybar for tripping, but nothing came of that. It was Rybar’s second minor of the tournament. The only other goalie penalty this Olympics was incurred by China’s Jeremy Smith.

The Slovaks picked up the pace in the second and took control with two goals. Slafkovsky scored his tournament-leading sixth at 3:17 on an odd play, the kind of goal that only goalscorers get. He got control of the puck in his own end and roared up ice, cutting down the left wing. He was angled towards the boards by Swedish defender Christian Folin, and in that moment Slafkovsky let go a shot. The puck was on end, and it then hit Folin in the leg and fooled Johansson.

Sweden then had a flurry of chances, but Rybar was rock solid. The Slovaks went up 2-0 on their second of two quick power plays. Pavol Regenda fought off two Swedes in the corner to get the puck, and he made a sharp pass out to the side for Samuel Takac. His shot beat Johansson to the short side post, a shot the goalie should have saved. It was Slovakia’s first power-play goal of the entire tournament.

The history and drama and pressure of the game built as the third period progressed. Sweden made their hardest push yet, but the Slovaks were relentless. You could see how much victory would mean to them. They had a chance to put the game away midway through the period when Peter Cehlarik created a breakaway, but he was stoned by Johansson.

Sloafkovsky and Regenda scored empty-net goals 18 seconds apart to seal the win and start the celebrations.