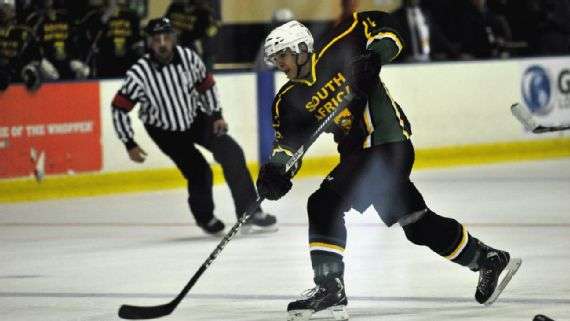 Uthman Samaai has played for South Africa for nearly a decade, and played his college hockey at Nazareth College in New York.

South Africa’s men’s ice hockey team will return to competitive action for the first time in nearly three years this weekend, as they host the 2022 IIHF World Championship Division III B in Cape Town.

From March 13-18, GrandWest Arena will host South Africa, Thailand, and Bosnia & Herzegovina in Division III B, with the teams playing each other twice. The side at the top of the standings will earn promotion to Division III A.

The Rhinos’ last competitive outing ended in relegation from the World Championship Division III A in Bulgaria, and then COVID-19 denied them a shot at promotion in 2020 and 2021.

As recently as 2015, South Africa played in Division II Group B. They were relegated that year and steadily fell down the Division III table before suffering yet another demotion four years later.

For context, the International Ice Hockey Federation divides teams into five divisions, with teams like the USA and Canada competing in the Championship division [16 teams]. Division II, which is South Africa’s target, features teams like China, Iceland, and Australia.

According to Rhinos captain Uthman Samaai, it has been difficult to replace the strong core of players that drove their success in 2015, and they’re only now finding their feet.

The costs associated with the game, which is not widely played at the tip of Africa where it very rarely drops to icy temperatures, prohibits new talent from rising from a grassroots level. Equipment is not readily available, and ice rinks are few and far between.

Samaai told ESPN: “Ice hockey is obviously a very expensive sport to play — especially in South Africa, because a lot of the stuff has to be imported.

“We had a bit of a transformation for a couple of years, where we needed those older players to stay for a bit longer to give those younger players the opportunity to make mistakes.

“Since 2020, we’ve closed that gap very nicely. The younger players have a ton of experience and we only have one or two newcomers in the team this year, which is good to see.”

Despite lack of international action this decade, South Africa remain the top-ranked team in Africa despite their recent struggles and there is a contingent within the team that has overseas experience.

“I studied in Rochester, New York, for four years, where I played for [D3 school] Nazareth College. Cameron Birrell played a bunch of hockey in England and he played hockey in America growing up [with the Michigan Mountain Cats],” Samaai said.

“Reinhard Venter was playing [for Vermont Lumberjacks in the Easter Hockey League] before COVID and then his tournament got cut short, so he came home.”

That there is a team at all is impressive, given there is very little money in ice hockey in South Africa, and the players compete for the love of it in regional tournaments for small salaries. A number of players on the national team compete in the Gauteng Premier Hockey League [GPHL], which features 10 teams from Pretoria and Johannesburg.

Samaai, who most recently played for the Cape Town Kings in the WPIHL, works for the City of Cape Town’s media department, while his teammates’ day jobs vary tremendously.

He explained: “A few of [our players] are digital designers. We’ve got a couple of teachers. We’ve got a headmaster. We’ve got people who work for American companies and guys who work in crypto, a few students – one of them is studying mechanical engineering and the other is studying to be a priest.

“I think that we’ve got a very wide variety of people, but I guess that’s kind of what makes the team so nice. We come from very different backgrounds, but when we get together, it’s like magic.”

South Africa are aiming for immediate promotion to Division III A and, according to Samaai, will not be satisfied with anything less. The withdrawal of Hong Kong from the upcoming tournament at GrandWest has at least narrowed down their competition.

“The goal in 2020, when we got together, was to get back to Division II in the next five years. Obviously, we’re chasing that same goal,” Samaai said.

“This year, we want to win it. I don’t think that there’s anything less that we can really be proud of.

“Next year, in [Division] III [A], I think we would be happy with placing, and the following year, we want to win it. The three-year goal is basically to get back to Division II B.”