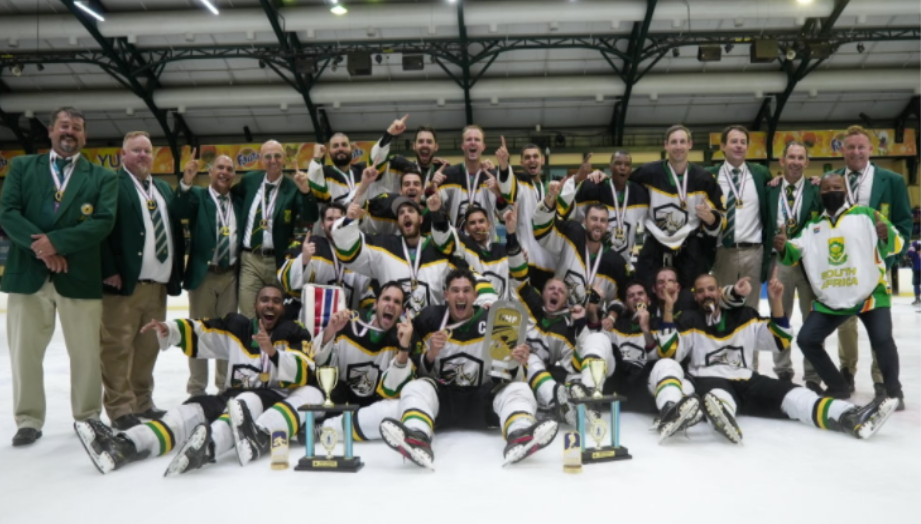 The South African players celebrate with the trophy after winning the 2022 IIHF Ice Hockey World Championship Division III Group B on home ice in Cape Town.

South Africa celebrated victory in the 2022 IIHF Ice Hockey World Championship Division III Group B – but only after a nail-biting finish to the three-team tournament in Cape Town.

The host nation lost out to Thailand in a shoot-out in the final game of the competition, but that was good enough to secure first place overall. However, the Rhinos trailed 0-4 early in the second period and were down 1-5 when Thailand got on the power play late in that same stanza – offering the Elephants the chance to claim the four-goal winning margin that would have seen them snatch a dramatic gold medal.

For South Africa’s captain Uthman Samaai, victory was all the sweeter after losing two tournaments due to Covid. The lower divisions of the IIHF Ice Hockey World Championship have been unable to play since 2019 for most events normally scheduled in spring.

“The boys have been working for three years in the dark so that meant everything,” Samaai said after the game. “It’s three years of hard work for four games here!

The Division IIIB was initially planned as a four-team event. However, Hong Kong, China had to withdraw leaving South Africa, Thailand and Bosnia & Herzegovina to contest the tournament. The organisers and teams agreed to go for a double round robin, with each team playing each other twice.

In the earlier group game, South Africa defeated Thailand 5-2, coming from 0-2 down to seal the win. With the Bosnians unable to take a point off either opponent, it all came down to Friday’s head-to-head, with Thailand needing a victory by four or more goals to take top spot.

For all three nations it was a leap into the unknown after a long wait to return to international hockey. Thailand currently runs a four-team championship, South Africa’s roster was largely drawn from the Gauteng Premier League, which has 10 teams based in Pretoria and Johannesburg, while Bosnia’s selection featured a few players based in Slovenia, Sweden and U.S. College hockey alongside a team largely taken from the local league in Sarajevo.

“It’s good to get the team back together,” Samaai added. “We’ve been going back and forth, playing in Jo’burg and Pretoria now for two years. I’m just ecstatic for international [hockey] to be back. Hopefully we can keep it going for the ladies, the U18s and the U20s.”

Despite losing the earlier meeting between the two countries, Thailand showed enough to suggest that it could be competitive against South Africa. And on Friday the visitor’s first-period performance was good enough to blow the whole tournament wide open. Two goals from Nattasate Phatigulsate sandwiched another from Phanaruj Surachiwat as the Thais stomped into a 3-0 lead. Early in the second, Surachiwat got his second of the game and suddenly Thailand was on course for gold.

Then it all began to change. South Africa was always competitive in this game but struggled to turn chances into goals. However, in the 36th minute captain Uthmann Samaai set up John Ventner at the point and the defender’s shot, although it lacked power, somehow squirmed through the equipment of goalie Benjamin Kleinechay. Thailand still had a commanding lead in the game, but South Africa was back on top in the standings.

Within a minute, the positions reversed once again, with Jan Isaksson pouncing on the rebound after Ken Kindborn’s shot slammed into the back boards and bounced onto the slot. If you think those names evoke Scandinavia more than the Siam Hockey League, you’d be right: both were born in Sweden and form part of a clutch of dual nationals on the team alongside Patrick Forstner (Austria), Hiroshima-born Masato Kitayama and captain Hideki Nakayama, born in Bangkok but with Japanese heritage and a CV that includes time playing in Europe. A Thai power play late in the middle frame seemed to deepen the hole into which South Africa’s medal hopes were fast tumbling.

Yet that penalty kill turned the game upside down, with captain Samaai to the fore. The Rhinos scored two short-handed goals, one either side of the intermission, to tilt the game and the tournament back in their favour. First, Samaai led the rush and Luke Carelse followed up to shoot home the rebound after the initial shot was padded away. Then, after the break, Samaai did it all himself, bursting through a startled Thai defence and winning his duel with Kleinechay. Ninety seconds later, Stefan Kluyts got it back to 4-5 and the Thais called a time-out but could not find a way to rebuild their lead.

Given the situation in the tournament, fans at Cape Town’s Ice Station arena were treated to the unusual sight of a team withdrawing the goalie while leading the game. Stranger still, head coach Juhani Ijaes – Finnish born, but based in Thailand since 2016 as a coach and sometime player – called Kleinechay to the bench with 7:27 remaining. With three goals needed, it was a brave gambit but on this occasion, courage went unrewarded. South Africa survived a shot against its post and forced a turnover before Jean-Michel van Doesburgh scored into the empty net to tie the game.

The game remained tied until the 60-minute mark, the hooter sparking noisy celebrations on and off the ice from a partisan home crowd of 500. But there was still overtime and a shoot-out to come before Thailand emerged with the consolation prize of victory in Friday’s game.

Bosnia took third place. The only European team in the competition was unable to win a game but improved throughout the tournament and pushed Thailand all the way before losing 4-3 in its last action. Mirza Omer top-scored for the team with 6 (4+2) points.

Thailand’s Isaksson, who played in Lulea’s junior system, finished as the tournament’s leading scorer with 12 (5+7) points. But South Africa’s Samaai, a Cape Town native in his 11th season of IIHF play, was named as top forward for the tournament. He had nine points and, crucially, masterminded his team’s recovery in Friday’s big showdown. Team-mate Cameron Birrell, also representing his country for the 11th time in senior World Championship play, was chosen as best defender. “He’s our best player,” added Samaai. “He was working for us throughout the tournament and then he got injured in the first period [of Friday’s game]. We put it all on the line and we got the job done for him.”

Among the netminders, Thailand’s Kleinechay showed why he’s nicknamed ‘The Wall’. The Minnesota-born goalie had a busy tournament, facing 164 shots in total and returning the best save percentage of the three to take the directorate’s top goalie prize. South Africa’s ‘Spiderman’, Ryan Boyd ranked second ahead of Bosnia’s Dino Pasovic.

And, as is so often the case at this level of hockey, where players often tend to bear their own costs to play hockey and tournaments are sustained by burning passion more than generous budgets, there was a special mention for the hard work behind the scenes.

“The organisers put together an unbelievable tournament in such a short space of time,” Samaai added. “Shout out to [South Africa Ice Hockey Federation president] Jason Cerff, he did everything.

“He is the epitome of South African ice hockey. He’s a volunteer, he works a full-time job and then does twice as much for hockey in this country. That’s my guy!”