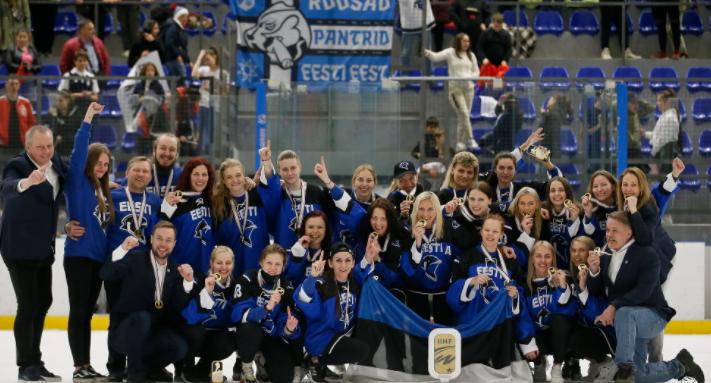 The Estonian players celebrate with their gold medals after winning all games in Belgrade.

It was a victory 14 years in the making. Estonia’s women last contested a World Championship back in 2008, coming fourth out of six teams in Division IV. But the global financial crisis slammed the brakes on funding for the sport and the program’s momentum was lost. This week, though, the team put the pedal to the metal, blazing through World Championship Division IIIB in Belgrade with a dominant display against the three newcomer teams.

Up against three nations making their Women’s World Championship debuts – host Serbia, Israel and Bosnia & Herzegovina – Estonia recorded three convincing victories and allowed just one goal. A fifth entrant, Iran, had to withdraw. With an aggregate score of 24-1 over three games, it’s no surprise that Estonia’s players led the individual scoring charts. Edith Parnik came out on top with 6 (5+1), defender Christin Lauk had five goals, while Merlin Griffin and Kirke Kulla and Diana Kaareste all finished with five points. Serbia’s Valentina Vrhoci (1+4) was the highest scorer from another country.

For Margaret Neering, a 19-year-old forward on the Estonian team, this was a World Championship debut to remember. The teenager plays her hockey with Viljandi-based HK Fuuriad in the national championship, where she’s currently fourth in scoring with 13 (9+4) points from 11 games. But a first taste of international action was something special.

“It feels unreal,” she said after collecting her gold medal. “It’s my first time at a tournament like this and really, it’s almost over the top. I was a little bit nervous at the start, but now it’s done.”

Although Estonia twice racked up 10 goals on its opponents in Serbia, Neering insisted that the tournament was a test.

“It wasn’t easy to win,” she said. “We had some big scores, but all the games were hard and we had some really tough opposition.”

Neering was just five years old when Estonia last played in the Women’s World Championship program. Today, she’s at the forefront of a new generation that is benefitting from the establishment of the country’s women’s league. Currently there are seven teams in the competition, with table-topping Roosa Panter (Pink Panther) entering a reserve roster as well as its first team. That’s up from four when the competition began in 2017 and the growth of the league is driving the national team as suddenly there is serious competition for places on the program.

“It’s very important,” Neering added. “If you can get to that level, it’s so amazing. Not everyone makes it now. Everyone is so good in training and in practice, it’s no longer that easy to make it to this kind of level.”

The team in Belgrade was able to draw on some players with international experience from Estonia’s last World Championship campaign. Women like Diana Kaareste, currently leading the league in scoring, and 2022 team captain Kirke Kulla were among the most prominent veterans on the roster.

“It was very good to have those players on the team,” Neering said. “They have that experience, they were very comforting when I had some nerves. They gave a lot of moral support on and off the ice.”

Now the hope is that Estonia can build on this successful return to international hockey and continue to push the women’s team up the rankings. The Estonian Ice Hockey Association has always been clear that support for the women’s game needs to be matched by the country’s female players making the most of their opportunities, so gold in Belgrade should help to generate more ice time back home.

“We can achieve a lot more,” Neering said. “Now we have shown we have a national team, we won this tournament, so we can get more opportunities.

“This should motivate a lot of girls and women.”

Host nation Serbia found Estonia too much to cope with in its opening game, losing 4-0. But the team recovered to claim silver after wins over Bosnia & Herzegovina (5-1) and Israel (6-0). Bosnia & Herzegovina took bronze thanks to a 5-1 verdict against the Israelis. For all the teams, it was a valuable learning experience and a first chance to test their progress against other countries in IIHF-sanctioned games. After a two-year hiatus in the lower divisions of IIHF play, this was a long-awaited debut for all three teams.