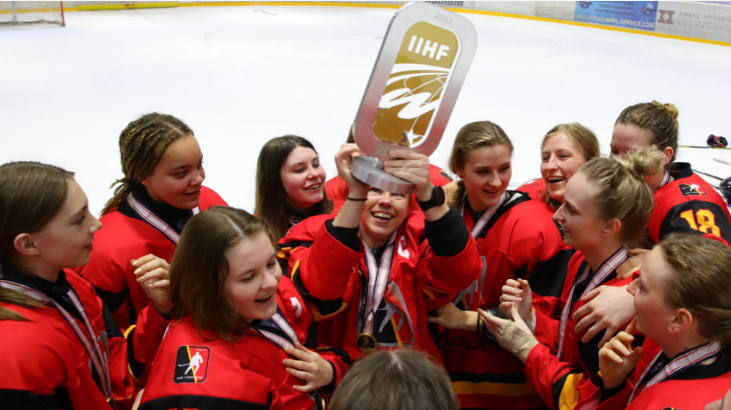 The Belgian players celebrate with the trophy after winning the 2022 IIHF Ice Hockey Women’s World Championship Division III Group A.

Belgium edged Lithuania on goal difference to finished first at the 2022 IIHF Ice Hockey Women’s World Championship Division III Group A. This unique situation occurred as the tournament held in Sofia, Bulgaria, from 4 to 9 April, took place in a double-round-robin format with just three teams. Belgium won one out of two games against second-placed Lithuania but with the better goal difference in the head-to-head games.

Originally there were six teams in this group, but Hong Kong, China withdrew because of Covid-19 related issues. Soon after Ukraine had to withdraw due to the Russian invasion of the country. Then the Romanian Ice Hockey Federation informed that their team was withdrawn because it would not be able to fulfill the Covid portocols, which would forsee a quarantine for non-vaccinated players.

The last time that the three teams – Belgium, Bulgaria and Lithuania – participated at the world stage of women’s ice hockey was during the 2020 IIHF Ice Hockey Women’s World Championship Division III, which was held at the very same Winter Sports Palace in Sofia. Belgium finished second behind South Africa, Bulgaria was fourth and Lithuania finished fifth in its international debut.

28 months later they were back in the same place, but with some new faces on the rosters and with different success. Belgium and Lithuania exchanged victories and both teams won against the host, so in the end the winner was the one with the better goal difference in the direct games. In the opening game of the tournament Lithuania beat Belgium 3-2 but three days later Belgium got a commanding 8-0 revenge.

“We took a good advantage from the double-round-robin format. After the first game we still had a shot on the gold and in the end, we got it. We changed the tactics for the second game against Lithuania. We put some players on Klara Miuller and tried to keep her out of the game and I think we succeed in that. Of course, they have a good goalie, but we always say: ‘When the first or second goal falls it would be our game.’ At 3-0 they changed the goalie, which was a surprise and then the game was actually over,” said Tim Vos, head coach of Belgium.

Klara Miuller, just 16 at her debut two years ago, shone in her previous visit to Sofia with nine goals in five games and was awarded as the best forward in the 2020 tournament. This week she scored nine goals too, but eight of those were in the first two games including six against Bulgaria. Miuller was unstoppable in the first game versus Lithuania – two goals, an assist and seven shots at the net from the team’s total of 15. The first period finished 2-0, but Femke Bosmans scored the first goal for Belgium in the 35th minute. After a series of ten penalties (seven for Lithuania) to start the third period 16-years old Anke Steeno tied the game on 4-on-3 power play with 5:07 left in regulation time. The parade to the sin bin continued with two infractions in 57 seconds for Belgium and Miuller capitalized on the 5-on-3 advantage for the game-winning goal at 56:43.

“We were the better team in the first game too. We had triple the amount of shots on net – 45 to 15, but we didn’t score as much. In the second game we had a 53-6 shot advantage. We were in a good shape and kept pushing, we outskated them. We were a more complete team. The girls are together for few years now and we grow every year. I think we have a good chance to stay in the above group, but our scoring ability has to go up. For some time that has been a problem for us,” admitted Vos, who was the captain of Belgium men’s national team at 13 World Championship tournaments in the period 1996-2010 and coached the women’s team from 2017 to 2019. In those three tournaments, as well in 2020 Division III Championships, Belgium was always second in the ranking.

On this year roster there were 11 women from the Cold Play Sharks Mechelen, a team that plays in Germany’s second-tier league, and four who are competing in the Netherlands. “We didn’t have friendly games before the championship. We tried to play with Dutch teams, but with the Covid rules everything was cancelled. We practised just once a week for one hour during the season,” explained Vos.

After a day of rest, Lithuania did not look like the team that won the first round-robin stage. The women were slower, didn’t have enough energy and Klara Miuller was not the dominant figure she was at the start of the event. In the first two periods Emilie Simonsen, who plays in Aalborg (Denmark), made 33 saves and was the only reason that Belgium led only 1-0. In just 65 seconds at the beginning of the third period Lotte de Guchtenaere scored two goals and Simonsen was replaced by Vilte Belicenkaite. The latter allowed three goals on six shots in 4:40 minutes and Simonsen, who was selected best goalkeeper in the tournament for second time in a row, was back on net, but the damage was done.

“Before we came, we said that we want more than bronze medals and now we have silvers. I must say: congratulations to the Belgium team. They were the best; they play as a team. It was not an easy tournament for us. The girls didn’t play one single game during the season because of the Covid-19 situation. The Latvian and Lithuanian leagues are playing together, but this season it was not possible. At any level, if you want to have success and winning, then you must have a summer training and that’s what the girls didn’t do. Our team was not in good conditioning shape and the game experience wasn’t there. During the season we had two practices a week and just before the tournament a week-long training camp with two friendly games. We beat Belgium in the first game here, which was a big surprise, but for the second game against them the girls were very tired,” said Bernd Haake, Lithuania’s head coach.

In their last game the Lithuanians scored three goals in five minutes in the middle of the first period after defensive lapses from Bulgaria, but in the second the lionesses stormed back with two tallies – by Maria Runevska and Mirela Zareva and had a 19-4 shot advantage. In the end Bulgaria had few chances to score, but the game finished 3-2 for Lithuania.

“We were lucky to win this game. The Bulgarian team was in good shape and our goalie Emilie saved us, especially in the second period. We want to host the tournament next year and I hope for better results. Klara Miuller has double citizenship – German and Lithuanian, so she will go to play in the German first league next season, probably in Mannheim, and that will bring her level up,” said Haake, the German expert, who has coached different Lithuanian’s national teams in the last decade.

Kaunas, the second-largest city in Lithuania, was scheduled to host the cancelled 2021 IIHF Ice Hockey Women’s World Championships Division III with eight participating countries as Estonia decided to come back to competition for the first time since 2008 and Bosnia and Herzegovina was due to make its debut. For this year there were three more debutants – Serbia, Israel and Iran (later withdrew), and it was decided to create Group A and B in the Division III with all the new and returning countries in Group B, which was staged in Belgrade, 22-25 March 2022, won by Estonia.

The Lithuanian team will receive the silver medals from Sofia by mail because it had to leave Saturday morning before the last game of the tournament and there was a theoretical possibility to finish with the gold if Bulgaria had taken a point from Belgium. The intrigue was there for almost twelve minutes, but then the favorites took control with four goals in just 2:11 minutes. In the end the score was the same as in the first game between those teams – 8:0. In addition to gold, Belgium earned two individual awards – Chinouk van Calster for the best defender and Lotte de Guchtenaere for best forward after she finished with seven goals and six assists.

“It is sad when you finish last and you don’t have any points. We can’t complain about our preparation for the championship. The team was practising the whole season two times a week and played 12 games in the men’s amateur league winning the title in the end. But we were missing some key players in the tournament. We had many problems with the goaltending, allowing soft goals. At the same time, we were not effective in capitalizing on our scoring chances. We were missing the precision and the composure in these situations,” explained Krasimir Monov, Bulgaria’s head coach.

The captain from the last three championships, Stefani Stoyanova, was injured during an exhibition game. The best player from the 2020 event, goalie Paulina Georgieva, suffered a knee injury in the first game and had to be replaced on the roster. And Veronika Metanova, who was at Concordia University Wisconsin and works in Chicago as policewoman, could nоt come. She had 14 goals in nine games for Bulgaria at the world stage since making her debut.

“We had chances against Lithuania. Even in the first game that we lost 3-7, the score was 2-3 until the end of the second period. We couldn’t contain Klara Miuller, but in the two games we scored five goals on a great goaltender as Simonsen. I’m happy with the character that the team showed coming back in the second game and fighting to the end,” said Monov.