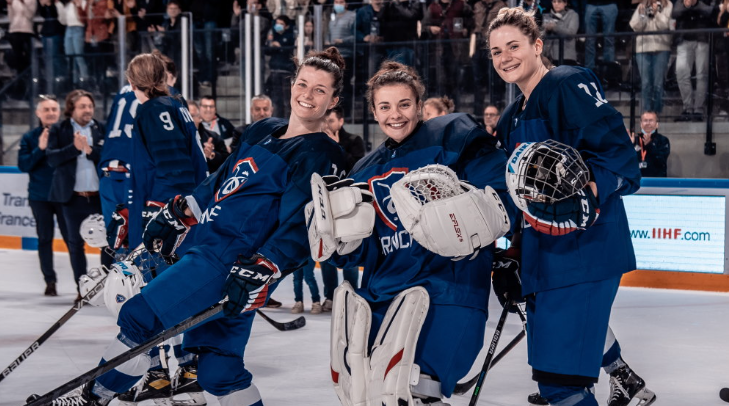 The French players celebrate after a win at the 2022 IIHF Ice Hockey Women’s World Championship Division I Group A on home ice in Angers.

The French women’s national team defeated Norway 4-1 to win the 2022 IIHF Ice Hockey Women’s World Championship Division I Group A on home ice in Angers at a packed IceParc and earns promotion back to the top division of the Women’s Worlds for 2023.

The 3,586 fans at the rink also created a new attendance record for women’s hockey in France and saw a tight game in which France outshot the Norwegians 40-37. Four different players scored for France with Estelle Duvin having three points (1+2).

“It was a really good thing in front of our audience. We played a great game from the beginning until the end. We started well, we showed them that we are here and we are ready. We are very happy about that,” Duvin said.

France and Norway were on par after three games with the French having the upper hand in the head-to-head game against a hard fighting Norwegian team.

Both France and Norway entered the last game with two wins against the Netherlands and Slovakia, and an overtime loss to Austria, with seven points and a +6 goal difference. It was a winner-takes-it-all game. Whoever would score more goals after 60 minutes, or after overtime or a shootout, would win the tournament and promotion to the 2023 IIHF Ice Hockey Women’s World Championship.

It turned out to be the return to the top level for France where it was relegated from in 2019 while Norway’s dream of getting back for the first time since 1997 was postponed.

“It’s been a goal for Norway for a very long time now. We almost made it a couple of times. For everyone on the team who has seen the ups and downs and never quite made it to the top division it would be huge,” Norwegian forward Andrea Dalen said before the game. The wait for the promotion will continue.

Norway had the better start into the first period. After eight minutes of play the Norwegians had a 10-5 shot advantage and were about to start their second power play when they fatally lost the puck in the neutral zone.

Chloe Aurard took the puck for a two-player rush on Norwegian goalie Ena Nystrom and sent a horizontal pass to Estelle Duvin, who opened the scoring for Les Bleues while playing shorthanded.

“It’s unreal. We’ve been waiting for years to have a World Championship at home and then it finally happened and we got the gold. It’s a dream come true,” said Aurard.

“It wasn’t an easy start. It was tough but we had our systems and we followed them. We knew how to stop them. We shot the puck to the net, we brought traffic. We just did what we had to do.”

With the goal France also improved its game and created more danger in front of the Norwegian net.

At 10:28 of the middle frame the French efforts paid off as the Norwegians struggled with the second offensive line of the French again. Defender Lucie Quarto netted the pack with the assist coming from Duvin.

1:39 later Duvin was again in the spotlight with a takeaway in the neutral zone and feeding Clara Rozier for the 3-0 goal.

The Norwegians tried hard to come back but struggled created high-calibre scoring chances against a tight-knit French defence.

In the third period the Norwegians came out strong putting pressure on the French net and were eventually rewarded when Andrea Dalen spoiled Caroline Baldin’s shutout with the 3-1 marker at 8:15. However, the French restored the three-goal lead three minutes later. With Lene Tendenes in the penalty box for an illegal hit Lara Escudero made it 4-1.

“We worked hard. We finally played our best game of the tournament. We just came back together today in front of the crowd so it’s quite a perfect night,” Baldin said.

“Norway played a really good game but we played as a team. It’s the heart of the team that made the difference. We say quite often “Team France Family” and it’s not just an image, it’s the truth and the solidarity between each other that worked.”

The French managed to defend the score before starting their celebration in blue with their home fans.

Also the top players of the tournament were split up between these two teams. French players Baldin and Aurard were named Best Goalkeeper and Best Forward respectively while Norway’s Emma Bergesen was voted Best Defender.

In a neighbouring clash Austira wanted to keep its chances for gold alive while Slovakia had the chance to win bronze with a regulation-time win. It was the Slovaks who succeeded. The 2-1 victory against Austria meant third place and the best finish since 2013 for the Slovak women’s national team.

Slovakia had a dream start with Tatiana Korenkova’s opening marker after just 37 seconds of play. Austria had a surplus of scoring chances but struggled putting the puck past Slovak goalie Nikola Zimkova. Instead it was Lucia Haluskova, who scored the second goal of the game at 15:13 of the middle frame.

“Best feeling in my life!” Haluskova said quick as a shot after the game.

Annika Fazokas eventually put Austria on the scoreboard just 52 seconds later but seemed to run out of energy while looking to tie the game.

“We came here from the beginning to win a medal and even after the tough losses it remained our goal,” Haluskova said. “We worked for each other and stuck to our systems. We just wanted it more than they did.”

No medal instead of gold medal for Austria

Austria started the tournament with three overtime/shootout wins against tournament favourites France and Norway and against underdog Netherlands making them the only undefeated team going into the last day but having one point less than France and Norway.

With a regulation-time win the Austrians could have kept their chance for gold and promotion alive but instead were left empty-handed after losing to Slovakia.

For Austria it’s the second bitter ending this season in their quest to join the top nations. Last November the Austrians upset Germany with a 3-0 win in the Final Olympic Qualification but a 1-0 loss to Denmark sent the Danes to Beijing 2022 instead.

Learning experience for the Netherlands

For the Netherlands it was only the second time after 1999 that the orange team played in the second tier of women’s ice hockey. The Dutch won both the Division IIA in 2018 and the Division IB in 2019 to earn promotion. They managed to keep up with their opponents in most games and scored a goal in each of the four games but finished on bottom of the ranking with one point from a 2-1 shootout loss against Austria.

More women’s hockey is coming soon with two tournaments that were moved to summer months due to Covid concerns. The Division IIB will take place in Zagreb, Croatia from 17-22 May.

The top-level 2022 IIHF Ice Hockey U18 Women’s World Championship will take place from 6 to 13 June in Madison and Middleton in Wisconsin, USA the Division IB of the category is scheduled for 5-11 September in Radenthein, Austria.

For the first time a top-level IIHF Ice Hockey Women’s World Championship will take place in an Olympic year. Denmark will host the tournament from 25 August to 4 September in Frederikshavn and Herning.

The tournament program, dates and hosts for 2023 will be determined in late May.