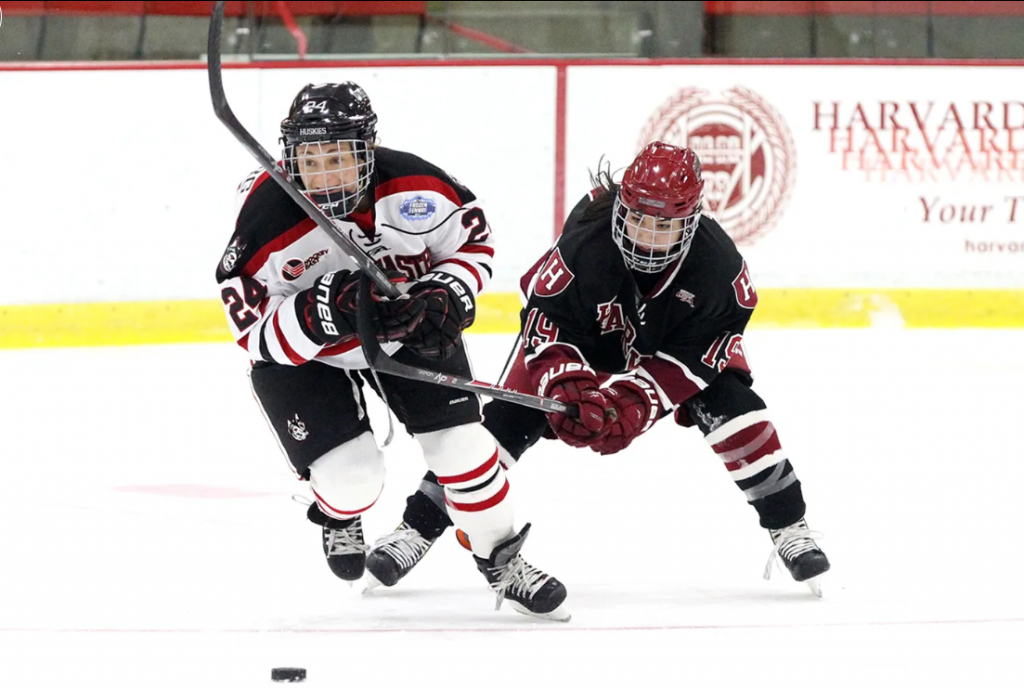 Chad Goldberg, a hockey player at Tufts University, was headed to Israel in 2013 for the Maccabiah Games, known as the “Jewish Olympics.” The event, held in the year after the Summer Olympic Games, brings together the best Jewish athletes from around the world.

His twin sister, Chelsey Goldberg, a hockey player at Northeastern, wanted to compete in Israel too. Her request to play on the U.S. men’s team alongside her brother was rejected. There was no other path for her because women’s hockey was not part of the competition.

She decided to do something about that.

Nine years later, Goldberg is in Israel for the upcoming 21st Maccabiah as a player on the inaugural U.S. women’s ice hockey squad—a team she helped put together.

“It lit a fire within me to make this happen on the women’s side,” says Goldberg, a 5-foot-6-inch forward who has played professionally since her Northeastern career ended in 2015. “I didn’t know how long it would take. I didn’t know what it would entail. But I was determined to get women’s hockey over to Israel.”

Goldberg began her mission by contacting Devra Schorr, co-chair of ice hockey for Maccabi USA, which is committed to building Jewish pride through sports. Schorr had helped restore men’s ice hockey as an event at the Maccabiah Games in 2013. She began searching for potential sponsors and players while building support from the Maccabi World Union, which oversees the Maccabiah Games. The 2017 event brought 10,000 Jewish athletes from 80 countries to Israel, making it the world’s third-largest sporting event (after the Summer Olympics and Pan American Games).

“Chelsey kept saying, ‘Why can’t I play?’ We had those discussions multiple times,” says Schorr, whose daughter played ice hockey at Boston University. “I told her, ‘I’m working on it, and as soon as I get the go-ahead, you’re going to be the first one I call.’ And she was the first one I called.”

The U.S. team of 22 players and two coaches met for the first time on the July 4 weekend in Philadelphia. After practicing four times over two days, they flew to Israel with plans to practice over the next week while touring the country’s historical sites as part of the Israel Connect program sponsored by Maccabi USA.

“When you become an athlete for Maccabi USA, you are not just there for the sport,” Schorr says. “You are there for the entire experience.”

They’ll be competing in a three-team tournament against Canada and Israel at the Maccabiah Games, which run July 12-26.

“It’s going to be a great experience,” says U.S. head coach Justin Levin, a longtime men’s coach for Drexel University and other programs in the Philadelphia area. “It’s bigger than just the on-ice stuff. We’re going there to compete and don’t get me wrong, when we’re on that ice, we’re looking to be successful. But we understand it’s a big deal and there are bigger things involved.”

Goldberg, who overcame two broken legs during her college years, helped win two Beanpots as a Husky and earned a place on the 2012-13 Hockey East All-Academic Team. She spent three of her Northeastern seasons alongside Kendall Coyne Schofield, who went on to earn the Patty Kazmaier Memorial Award as the top player in women’s college hockey in 2016.

Goldberg’s career has been curtailed by the downfall of women’s professional hockey in North America. She has been competing in showcase events run by the Professional Women’s Hockey Players Association while working full-time in commercial real estate and property management in her hometown of Los Angeles. She’s a double Husky with an undergraduate degree in human services and a master’s in sports leadership.

“I’ve just been training on my own,” says Goldberg, who was inducted into the Southern California Jewish Sports Hall of Fame in 2020. “I’ve been making it work.”

Her first trip to Israel is a culmination for Goldberg athletically, religiously and culturally. “I’ve never been to Israel,” she says. “I’ve always wanted to participate in my Birthright trip, but because I’ve been so involved with hockey at the elite level, I’ve never really had that much time. I was fortunate enough to get sponsored to go—I’m very, very grateful to my sponsors for that.”

Goldberg is fully aware that she is helping to advance the sport.

“I’m passionate about growing the game of women’s hockey,” she says. “I’m very, very excited and proud to represent Team USA at the first games.”