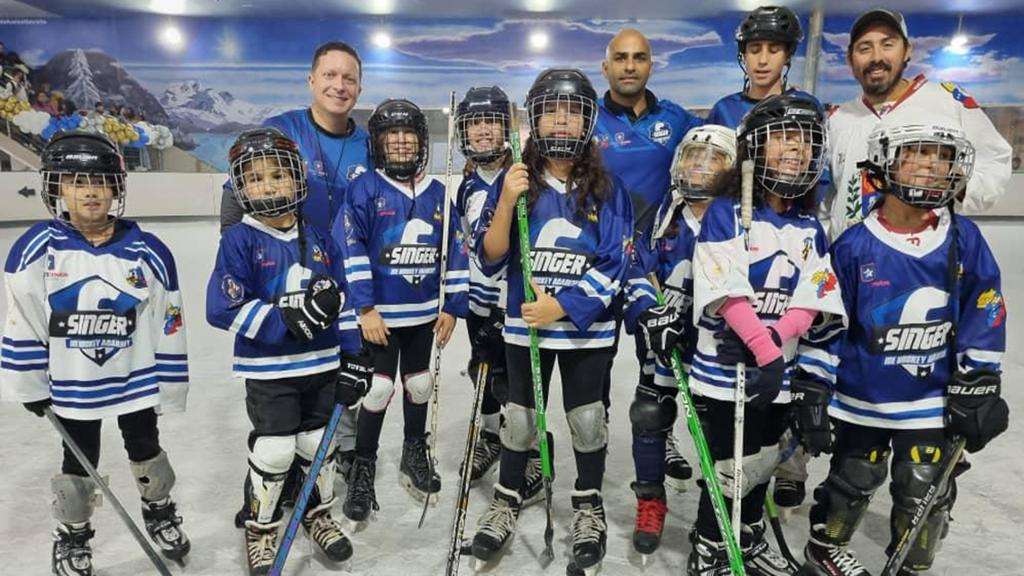 What began as a sarcastic comment on social networks, became the materialization of a visionary dream that now seeks to expand the knowledge and development of hockey throughout a nation like Venezuela, which, although it does not have a historical tradition in this sports discipline, begins to take important steps at the local level to achieve greater goals.

With this goal in mind, Juan de Dios Singer, President of the Venezuelan Hockey Association, has been working for years in providing equipment such as skates, sticks, nets, pucks, protectors, helmets and other instruments for the practice of hockey, in various sectors of Venezuela. All this dedication has allowed the creation of the Ice Hockey Academy Singer , the first ice hockey school in that country and whose headquarters are located in the state of Bolívar in the east of the nation.

“This started in February when I saw on a social network that they were making fun of the construction of an ice rink and I immediately contacted Gabriel Romero, a teammate of the Venezuelan hockey team, to let him know what he was leaving in his home state. to build a track, so we started with the approaches to make that facility, the headquarters of our academy” Singer explained.

The road was not easy, but the manager never lost hope. “Thank God, the talks that began in February and continued until June 2022, ended with the official agreement a week ago, in which we were allowed to start our academy in the facilities of that track in Bolívar state, initially for a period of three to five years.

Part of the factors that allowed the vision of Singer and his team to materialize was having established a tangible contribution agreement with the administrators of the Altavista Ice Rink, officially the headquarters of this historic school in Venezuela. “These four years of work here in South Florida in the United States have filled us with a lot of knowledge and in this way we were able to guide them in terms of maintenance work, but we also bought some products to put the track in optimal conditions” .

One of the main partners of Juan de Dios Singer in this project is Gabriel Romero, owner of a shipping company to Venezuela and whose position provided notable support from the beginning. “He is my great accomplice,” Singer said with a laugh. “Thanks to the donations we have received here in the United States and using Gabriel as a channel, we were able to create six online hockey academies. Now the next step is for the members of these schools to enjoy the experience of playing ice hockey in Venezuela, at least for a weekend.”

The academy begins to take its first steps and in this way, Singer, owner of the school, appointed Alejandro Ramírez, with extensive experience in ice and online hockey, as the Technical Director, who will be receiving orientations to be able to develop the programs in the immediate future. Similarly, Víctor Castro, who, like Ramírez, are local residents in the State of Bolívar, will serve as General Director in terms of the organization and enrollment of future students.

The group, of which Jesús Vergara is also a part, as technical assistant, hopes to start formalizing registrations from next August 20. The minimum age to be part of the academy is five years. “We are going to start with all the irons, the idea is to promote all the work in the best possible way”.

True to his fighting style, Singer has already begun to develop ideas in other locations, such as the city of Maracaibo, in Zulia state, located in western Venezuela. “The fact of having given rise to this initiative in the state of Bolívar, has made the government of Zulia begin to contact me and we agreed to start the work of restructuring an ice rink there, thanks to the knowledge we have acquired here in Florida.”

As part of the promotion of the Ice Hockey Academy Singer , the creation of a social media account called @guayanaicehockey was announced, which will be the digital platform to provide information on registrations, practices, courses and everything that surrounds the work of a school that, according to its owner, will continue to grow.

“There are already other projects with the possibility of doing something in cities like Valencia or Maracay, both in the central region of Venezuela, but for now, the state of Bolívar is home to this unique opportunity to develop local ice hockey.” Singer concluded, who at the same time continues to give clinics and work on the provision of equipment, as well as in the preparation of the different Venezuelan teams that will see action in the next Latam Cup, based in the city of Sunrise, in the training facilities of the Florida Panthers.