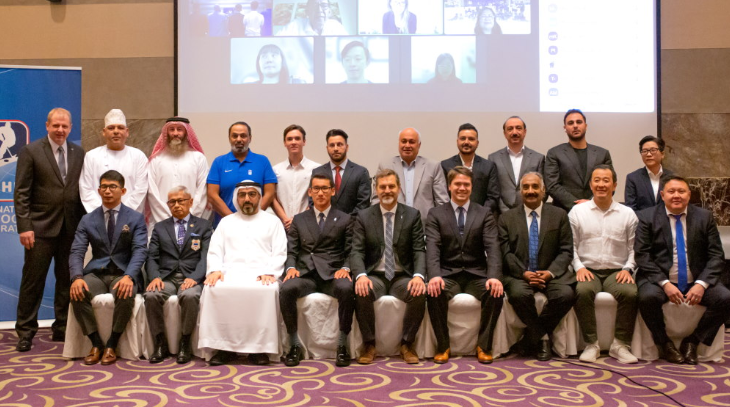 Members of the IIHF Asia and Oceania Strategy Planning Group participated on-site in Abu Dhabi and remotely at the meeting.

Due to stricter travel restrictions, many ice hockey tournaments have not been place for two seasons in Asia. The IIHF Asia and Oceania Ice Hockey Championship (formerly Challenge Cup of Asia) came back last summer with an U20 edition held in Thailand. Now two more tournaments have been announced.

The 2023 IIHF Ice Hockey U18 Asia and Oceania Championship is planned to be held between 26 February and 5 March 2023 (exact dates to be confirmed) in Ulaanbaatar, Mongolia with Indonesia, India, Iran, Macau (China) (TBC), Mongolia, Singapore, Thailand, the United Arab Emirates and Uzbekistan. It will be the first IIHF tournament for Uzbekistan since becoming a member in in 2019.

The 2023 IIHF Ice Hockey Women’s Asia and Oceania Championship will be held in Bangkok, Thailand with the initial dates 14-21 May 2023 with the participation of India, Iran, Kuwait, Malaysia, Singapore, Thailand and the United Arab Emirates. It will be the first participation in an IIHF tournament for the Iranian women’s national team.

The meeting was held with the members of the Asia and Oceania Strategy Planning Group (AOSPG) and in attendance of IIHF Senior Vice-President Petr Briza and IIHF Development Director Kalle Valiaho, who introduced and highlighted the importance of ICE26.

In a seasonal review and outlook, IIHF Regional Vice-President for Asia and Oceania, Aivaz Omorkanov, mentioned that the pandemic hit ice hockey in Asia very hard and it is one of the main priorities to come back stronger than ever before. Carefully selected programs with the main focus on development and sustainability alongside a good mix of events will become the key to success.

Several workshops and in-depth discussion in regard to the IIHF’s key initiatives amongst the membership and with all IIHF representatives on-site where a focal point of this meeting.

“We need to use every single opportunity in the Asia and Oceania region to ensure the growth and to unfold the potential. With the IIHF Asia and Oceania Office, which is now located in Abu Dhabi in the United Arab Emirates and managed by IIHF Sport Development Manager for Asia and Oceania Harald Springfeld, we will lay down the foundation of future growth. The office will work very closely together with the IIHF Office and all 27 members of the Asia and Oceania Strategic Planning Group,” said IIHF Vice-President and Committee Chairman Aivaz Omorkanov.

In the first quarter of 2023, the members of the Asia and Oceania Strategy Planning Group will regroup and kick off a new series of Learn to Play seminars and recruitment program initiatives with two seminars in the region. Following the meeting, an ice making seminar for the region has started in Abu Dhabi. Based on the further development and final version of ICE26, other initiatives will follow.