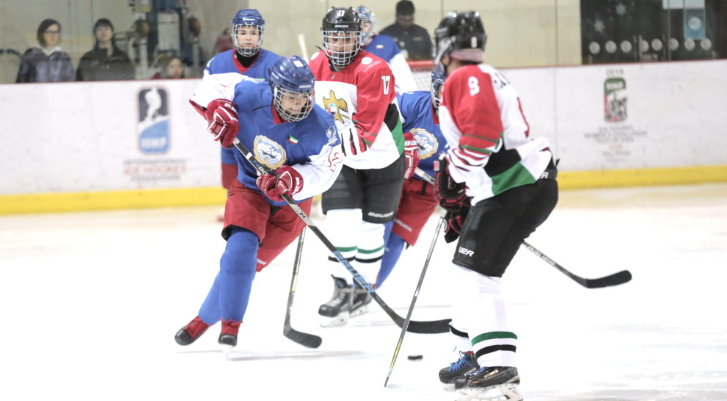 When the search for a host for the inaugural IIHF Women’s Development Cup began, Kuwait eagerly put their name forward.

While Kuwait’s men’s national team has competed in three World Championship tournaments (2018, 2019, 2022), the women’s program has yet to reach that level, and the Women’s Development Cup presented itself as an opportunity for Kuwait to gain valuable competitive experience against national teams from other smaller women’s programs.

“The Kuwait Ice Hockey Federation, they’ve far exceeded expectations,” said Irish Ice Hockey Association President Aaron Guli, one of the architects of the Development Cup, which debuted with a men’s tournament in 2017. “It’s top to bottom first class. They’ve been a big driving force in getting the first Women’s Development Cup over the line.”

In 2019, the Kuwaiti women’s team made their international debut at the IIHF Ice Hockey Women’s Challenge Cup of Asia Division I tournament. It was not an easy introduction to international play (through three games, Kuwait surrendered 34 goals and scored zero), but it was an important first step for the young program.

One special occurrence of that event in Abu Dhabi, United Arab Emirates, was that Kuwait had five sisters on the roster including a triplet (see story).

Since then, Kuwait has been hungry for chances to develop their athletes and play against other countries. They have held training camps in Czechia and Slovenia, and participated in tournaments in Abu Dhabi and Bangkok. This August, three women’s teams – two from Kuwait and one from Bahrain – competed in the Kuwait Ice Hockey League Open Championship, a tournament developed to further the sport in the Gulf region.

“When we go to another tournament in another country, [the players] get more power from hockey,” said Kuwait women’s program team leader Laila Alkhbaz. “They know more players, they know other cultures. When they contact with other teams and other players in different countries, they get a new experience in hockey or also in their life.”

When the puck drops at the Kuwait Winter Games Club’s ice rink to start the inaugural IIHF Women’s Development Cup on 6 November, Kuwait will be joined by national teams from Andorra, Colombia, Ireland, Luxembourg and the United Arab Emirates.

Alkhbaz has been at the forefront of developing women’s hockey in Kuwait since the program was officially launched in 2017.

“Before we didn’t have a women’s team in Kuwait, only like a hobby. A few girls, they go to the ice rink and they play. Meshal [Alajmi] is the first coach to help the girls to make a hockey team, and this was in 2008. But they didn’t have the money, they didn’t have the equipment, they didn’t get the support from the government, so they cancelled it. After 2017, the Winter Games Club decided to make a women’s team and they collected the girls who know hockey, who played hockey before, and we made a team.”

“I learned that when you work hard, you get what you want,” said Alkhbaz. “I felt some difficulties there because it’s my first time to contact with the hockey society. I learned how to manage my team, how to be a good leader… Now I feel like hockey is a big part of my life.”

When not participating in tournaments or travelling to other countries for training camps, Kuwait’s female players compete in the Kuwait Women’s Ice Hockey League (KWIHL), which was formed in 2018. Now in its fifth season, the league consists of four teams – the Blue Waves, Gladiators, Diamonds and Wildcats – that play once a week from October to March or April.

The league was still in its infancy when Kuwait took to the ice at the 2019 IIHF Ice Hockey Women’s Challenge Cup of Asia Division I. Fast forward to today, and the players taking part in the Development Cup will come with several years of experience of league play.

Kuwait has made significant strides in just five years, launching a women’s national team program and a four-team women’s league, and participating in IIHF events. They will return to the Challenge Cup of Asia (now called the IIHF Ice Hockey Women’s Asia and Oceania Championship) for the 2023 edition in Bangkok in May as well. But first, Kuwait gets to cross another milestone off the list – hosting not just an IIHF women’s event, but the first ever Women’s Development Cup.