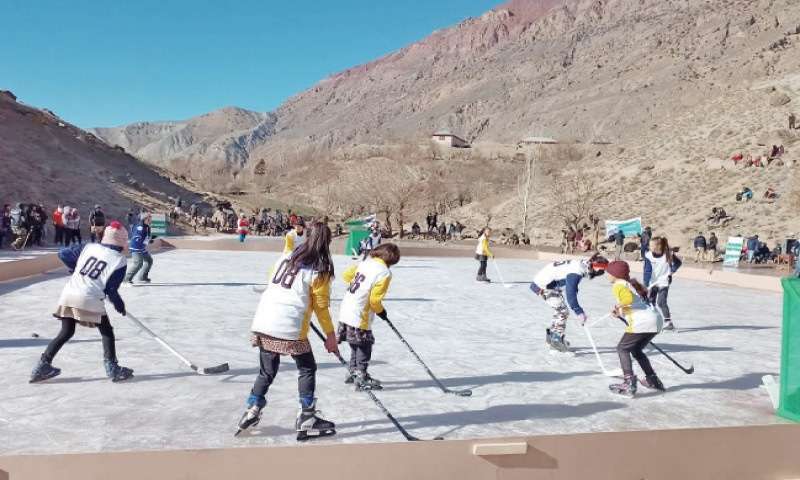 An ice hockey match under way in Parwak village of Upper Chitral district on Tuesday.

PESHAWAR: An ice hockey tournament kicked off in Parwak village of Upper Chitral district on Tuesday, providing a thrilling and rare opportunity of entertainment to the young boys and girls, who were divided into eight teams.

Canadian High Commissioner in Islamabad Ms Leslie Scanlon had arrived in the village along with her daughter, who refereed the inaugural match of the event played between the fox and snow leopard teams. The latter won the match by three goals.

A large number of locals had thronged the venue located in the centre of the village, where an ice surface had been developed for the game with the financial support of Canadian High Commission and facilitated by Aga Khan Rural Support Programme.

The people evinced great interest in the newly-introduced game, and were impressed by the performance of the young players, who had worked vigorously during the past two years when ice hockey was introduced here by the Canadian government.

Ice hockey is the national game of Canada.

The participants said it was quite a new and thrilling game for them, adding the game would become popular with the locals like polo, thus becoming the best pastime for them in winter.

A woman councillor, Sara Shah said participation of little girls in the game was highly appreciable and the game promised gender equality in the area, where girls had also excelled in the field of education.

Speaking on this occasion, Ms Scanlon said the topography of the area was ideal for the game. She said future of the game would depend on the interest of the local communities.

She expressed her determination to support the ice hockey and other snow-related games in the area. Later, she visited the stalls of locally made handicraft and food items and expressed her interest in them.