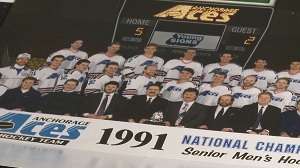 As the Aces Alumni prepare to return to the ice this week we take a look back at the franchise’s humble beginnings and rise to prominence in the professional ranks in three-part series leading up to Friday and Saturday’s charity games.

Aces hockey can be traced all the way back to the 1930s when a seniors men’s hockey team took the ice and played on an outdoor rink on Fireweed Lane. An Aces program from 1993-94 had a history of the team and said the team made their own ice, and hot-mopped between periods.

The spirit of that team would live on years later when former UAA hockey player Dennis Sorenson brought the team back.

“We needed something to do here locally, and we thought there would be a good draw for it,” said Sorenson.

After previous failed attempts to put together a senior men’s amateur team a unique set of circumstances brought hockey back in December of 1990.

A Russian team got stuck here because of weather,” said Sorenson. “I got a phone call from the rink one night that said can you get a group together to play this club?”

Prominent local Anchorage hockey coach Dempsey Anderson suggested Sorenson call his new team the Aces, as a throwback to the 1930s Anchorage Men’s team. The newly-formed team would skate to a 3-3 tie, and lose in overtime to the Russians.

“We were all ex-UAA, and myself UAF college players like some local high school players,” said Keith Street, a member of that 1990-91 team.

Following that game Sorenson decided to secure ice time, a schedule and voilà!: the Anchorage Aces were in business.

“I was running it off my American Express Card and my sporting goods store,” said Sorenson. “It was difficult, we were making due, and nobody was getting paid we were just having a good time, putting on a pretty good brand of hockey of former college players

Playing and coaching Sorenson quickly found out the business of sports is expensive, and he didn’t have the deep pockets to keep the team on the ice.

“The big turning point for me is the first ownership group for me that helped me get it going, as the player-coach it was difficult to have friends on the team, and tell them who’s going to play when,” said Sorenson.

With financial backing, the team headed to the amateur national championships. The Aces took down in-state rival the Fairbanks Gold Kings on their home ice to win the team’s first-ever national title.

Building on momentum from their early success the Aces would make a name for themselves in the world of senior amateur hockey slowly creating a fan base in Anchorage.

“It was tough dealing with UAA (hockey) at the time because UAA was good, UAA was winning games in the early 90s, they were having great crowds, and were trying to build on their success just a different type of hockey,” said Sorenson.

The local hockey team would get another chance to face off with international talent when the Arctic Challenge came to Alaska in September of 1993 leading up to the 1994 Olympic Games in Lillehammer, Norway.

The pre-Olympic hockey tournament was made up of Teams USA, Russia and Canada. Along with some of the world’s best was Team Alaska, made up of many players from the Aces roster.

Building a resume against national and high-level senior amateur teams the Aces would soon eye a leap to the pro ranks in 1995.

“We were all young enough where we had that passion to play at higher level than a local men’s team,” said Street.

Aces get paid to play & transition to life on the road

In the fall of 1995, the Aces officially become a professional hockey franchise joining the West Coast Hockey League. Turning pro also meant the team would look a lot different than the senior men’s amateur team for which it was known from 1990-95.

“There was more on the line, guys getting traded, guys getting moved around, picked up, you kind of knew you had to perform or get traded,” said former Aces center Keith Street.

The former Univ. of Fairbanks standout, Street was one of a handful of players who would remain on the Aces as they made the transition to professional hockey.

“We had the two-week road trips,” said Street. “The longest one we had was 28-days that’s a long time to be away from your family, and it was tough for some of the local guys with jobs.”

“It was great hockey,” said Lester. “College Hockey is a totally different animal, that’s fine, it’s not Aces hockey, and I think that’s what they (Aces) were able to market.”

Lester felt the quality of hockey – plus fighting and beer – fueled the early popularity of the team.

On the ice, the team was built around centers Keith Street and Dean Larson, from 1996-99 Street would register three straight 100-point seasons, and Larson would post similar stats records four 100 point seasons from 1996 to 2000.

Kelly Cups and the end of the Alaska Aces

From losing games to losing money, things were not looking good for the Aces in the early 2000s. Fresh off their worst season in franchise history in 2001-2002, it didn’t look promising for Anchorage’s professional hockey franchise.

In June of 2002 the team faced $2,000,000 in debt, and then owner Mike Cusack Junior put the team on eBay. The franchise would soon be saved by a seven-member group who bought the team in bankruptcy court.

2002-2003 would be considered a rebuilding season, and safe to say, times were changing from the team’s name, ownership to their head coach.

In any line of business, who you hire is key to success. Professional hockey was no different, and many consider the hiring of Davis Payne as a turning point for the franchise.

“Davis was the most prepared interview that I’ve ever done, and I’ve probably interviewed 500 people in my life,” said Parks. “By far the best-prepared and had a plan.”

When the team made the jump to the ECHL in 2003 they would change their name to the Alaska Aces, and their success on the ice would soon change as well.

By 2004 the team had built a winning culture, and soon it would have Stanley Cup talent to match when they added East Anchorage’s Scotty Gomez during the 2004-2005 NHL lockout.

“They managed to keep it a pretty big secret, not a lot of people knew,” said Gomez Aces teammate Kimbi Daniels.

Not only did he help the Aces on the ice, but in the ticket sales department as well.

After the lockout Gomez would return to the NHL, but the best days were yet to come for the Glacier Blue as they won the Kelly Cup, ECHL’s version of the Stanley Cup, in 2006, 2011 and 2014.

But the end of the franchise was quickly approaching.

“I remember we were in the third round of the playoffs in 2014, and we weren’t selling out the games,” said Lester.

In February of 2017 the ownership group announced the franchise would fold for financial reasons.

The announcement took many by surprise, but Parks said it was declining ticket sales, the economy and keeping the players on the ice.

“What most people don’t understand the real risk with minor league hockey is not only do you have payroll and travel, but we also had workers comp, all the injuries, we had to take care of those financially,” said Parks.

Since 2017 many hockey fans have speculated when professional hockey will return to Anchorage.