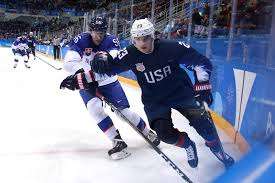 Troy Terry led the way with three assists for the Americans, who now face the Czechs for a place in the semi-finals.

“That’s my identity as a player,” Terry said. “I mean, I can score, but I’m more of a playmaker and a passer, and I thought I’ve had a pretty good tournament. Tonight I was just able to make a little bit cleaner plays and guys were able to finish on them. When you play with guys that can score like that, it’s fun.”

Slovakia will likely finish in 10th place and are finished for the 2018 Olympics.

“It’s not bad, but we are not happy,” said Ladislav Nagy. We could have finished first in our group, and we lost it. We should have beat Slovenia and we would have been fine.”

It was a game that started slowly but produced some fireworks in due course. The scoreless first period gave was to a four-goal second, which began with a quick strike by the U.S.

Terry had a breakaway that was stopped by Jan Laco with a Bower-esque pokecheck, but Ryan Donato got to the rebound and snapped the puck into the open side at 1:36.

Just 26 seconds later the Slovaks found themselves in a major hole thanks to a breakdown in discipline. In the offensive end, Ladislav Nagy crashed into goalie Ryan Zapolski to earn a minor, and as play moved into the Slovak end Michal Cajkovsky elbowed Donato in the head, earning a match penalty.

Zapolski was dazed by the hit, which caught him in the head, and needed several minutes to recover.

“He hit my head and I just pinched my neck a little bit, but my head is fine. It wasn’t a concussion or anything like that.”

The U.S. wasted no time in converting the five-on-three into a goal, James Wisniewski capitalizing on Terry’s nice no-look set-up pass. Fortunately for Slovakia, this was the extent of the damage from these penalties.

Midway through the period, though, the U.S. went up 3-0 thanks to a Mark Arcobello one-timer in the slot off another Terry feed.

The Slovaks got on the scoreboard at 16:54 on the power play when Peter Ceresnak stepped into a shot from the top of the circle.

The U.S. got an insurance goal at 9:52 of the third off the rush. Brian O’Nell took a hard check for the team along the boards before passing to Broc Little, who found Garrett Roe in front. Roe made no mistake with his quick re-direct to make it 4-1.

Donato got his second of the night late in the third on a power play to close out the scoring.

“We have to win now to keep moving on, so I think that’s something that shows how strong this team is and how resilient we are, said Zapolski. “We had our best game today, and I think our best period of the tournament was the third period tonight so it was really important for us to have that type of game.”