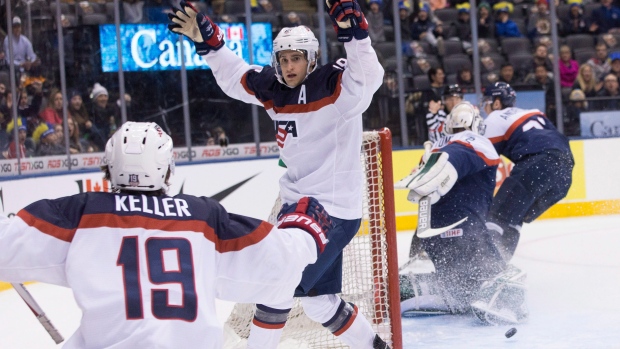 Team USA built on its improved play as its first game progressed, and the players came to the rink ready for a full 60 minutes of skating tonight.

They worked effectively in all facets of the game, beating Slovakia 5-2 and improving to 2-0 in the tournament. There were five goal scorers, and 12 players recorded at least one point for the winners.

“We were focused and ready to play,” said captain Luke Kunin. “We did what we needed to do to be successful. We needed to get a good start and get pucks to the net. Everyone on the team contributed.”

The Slovaks were much improved over their one-sided loss to Canada last night but were still decidedly the second best team on the ACC ice tonight. They are now 0-2.

Moving the puck with confidence and using their speed, the Americans pressured their opponents all night long and generated countless good scoring chances. In all, shots were 50-20 for the U.S., and the Slovaks have now been outshot in two games by a cumulative total of 94-26.

At the other end, coach Bob Motzko did the same, playing Joseph Woll and resting Tyler Parsons.

“Coach Motzko always says you have to come to the rink ready to play every day,” noted defenceman Jack Ahcan. “That’s what we did today. It’s about our heart and our effort.”

The U.S. opened the scoring at 10:15 of the first despite a great save by the goalie off a point-blank shot by Tanner Laczynski, but Tomek couldn’t control the rebound and Laczynski knocked in the loose puck.

The Americans went up 2-0 near the end of the period off a gaffe by Andrej Hatala at the U.S. blue line. As he prepared to play the puck he lost his balance and fell awkwardly, allowing a two-on-one with Clayton Keller and Colin White.

Keller waited, fired a nice saucer pass to White at the blue ice, and White redirected the puck in for a 2-0 lead.

But Slovakia showed some life. Midway through the period it had a power play and almost scored, moving the puck well and creating several chances. The Slovaks had a second man advantage later in the period and built on the success of the first, scoring at 18:08 on a great back-door pass from Oliver Pataky to Martin Fehervary who didn’t miss the open net.

The U.S. went up 3-1 at 2:03 of the second on a delayed penalty. Jack Ahcan got the puck to Tage Thompson in the slot. The pass was behind Thompson, who spun and roofed a shot in one motion over an unsuspecting Tomek. The highlight-reel goal seemed to deflate the Slovaks.

Michal Roman got the only goal of the third, with 36.5 seconds remaining, on a long point shot to make the score marginally closer.